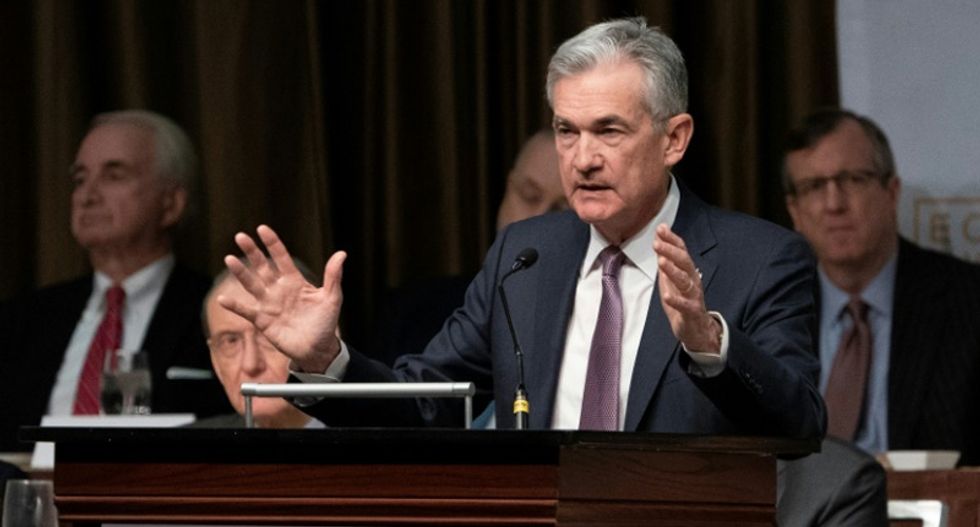 A day after President Donald Trump's latest attack on the US central bank, Federal Reserve chief Jerome Powell hinted Wednesday the key lending rate would move higher but said there was no preset course.

Powell said in a speech in New York that interest rates remained "low by historical standards" and still provided stimulus to the economy.

And he repeated the view that the Fed's policy rate -- at 2.25 percent -- is "just below" the estimate of neutral, a rate that neither stimulates nor restrains the economy.

US stock markets jumped following the comments, as investors interpreted them to mean the central bank was close to the end of its tightening cycle. The Dow jumped 1.8 percent in the moments after the speech became public.

However, central bankers have never signaled they intend to stop raising rates once they hit neutral -- which is a moving target and subject to debate. Instead they will watch economic data, especially inflation.

And Powell said the Fed's gradual increases balanced the risks between raising too much and not enough.

Trump on Tuesday again blasted his hand-picked chief of the US central bank, saying he was "not even a little bit happy" with his selection of Powell.

The Federal Reserve chairman has presided over three interest rate increases this year and is widely expected to hike again in December.

In an interview with The Washington Post, Trump said the Fed was "way off base."

"They're making a mistake because I have a gut and my gut tells me more sometimes than anybody else's brain can ever tell me," the president added.

Trump has repeatedly attacked Powell for continuing to raise the benchmark lending rate, which Trump says undermines the work he is doing to juice the US economy.

In his speech to the New York Economic Club, Powell again stressed that there was "no preset policy path" for interest rates and said the central bank had moved gradually, since "moving too fast would risk shortening the expansion."

But keeping rates "too low for too long" could create other risks, including accelerating inflation, he said.

"As always, our decisions on monetary policy will be designed to keep the economy on track," he said.

Powell and other officials have dismissed the unprecedented political attacks from Trump, saying they have no influence on deliberations of the independent central bank.

But many economists warn that by attacking the Fed for raising rates, Trump is actually putting pressure on the central bank to raise rates to demonstrate its political independence.

Powell's speech was focused largely on a new Fed report on stability of the US financial system, but contained an unusual comment:

"By clearly and transparently explaining our policies, we aim to strengthen the foundation of democratic legitimacy that enables the Fed to serve the needs of the American public."

In his speech, Powell also explained the Fed's inaugural report on the stability of the US financial system, released earlier Wednesday.

Among the conclusions, he said the central bank did not see "dangerous excesses" in stock markets, while the financial system was now "substantially more resilient" than it was before the 2008 financial crisis.

"My own assessment is that, while risks are above normal in some areas and below normal in others, overall financial stability vulnerabilities are at a moderate level," Powell said.

While he acknowledged the growing concern over increased borrowing by businesses that already carried a high debt load, he said that for now they were "unlikely to pose a threat to the safety and soundness" of the system in the event of a downturn.

Meanwhile "the unsettled state of trade negotiations, Brexit negotiations, budget discussions between Italy and the European Union, and cyber-related disruptions" all remain risks to the global economy.