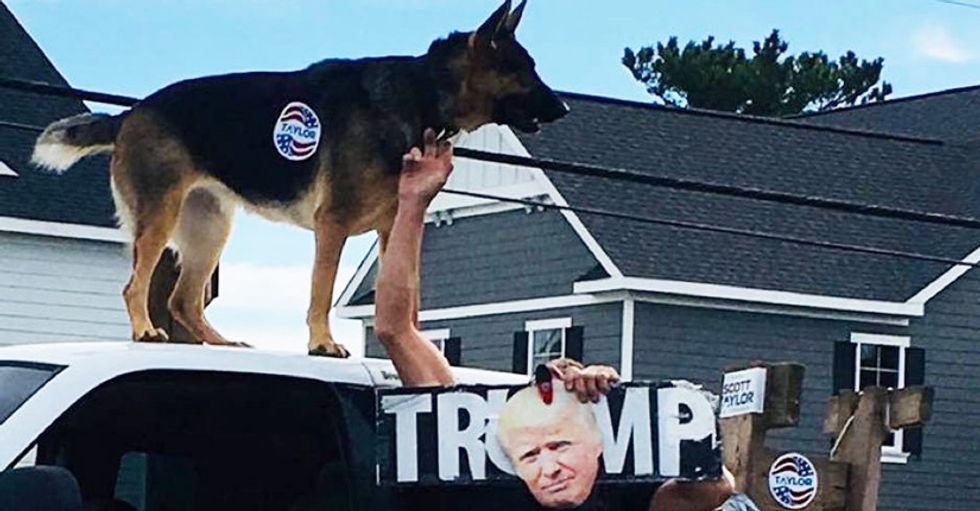 A "known, excited" Donald Trump supporter was parked outside a Virginia Beach, Virginia polling precinct on Election Day, with his barking German shepherd dog on the roof of his pickup truck.

CBS News affiliate WFMY reports some voters are telling them he is making them uncomfortable, but "election officials tell 13News Now the man wasn't violating any laws."

"What the heck is happening in Virginia Beach??" Norfolk, Virginia City Councilwoman Andria McClellan asked in a Facebook post, with the photo attached (below). "There’s a German Shepherd standing on top of a pick up angrily barking at voters as they approach the ARE voting precinct (sporting a Taylor button and Trump banner). This speaks volumes. If this isn’t voter intimidation, I don’t know what is," she adds.

The Virginia Beach Republican Party doesn't have a problem with what several are calling voter intimidation.

WFMY reporter Steven Graves reports a GOP party official "says the man is a known, excited Trump supporter who would do no harm."

The Virginia Beach Democrats, however, "say it was blatant intimidation," he adds.

The German shepherd is "wearing" a large sticker in support of GOP Rep. Scott Taylor, who is running for re-election.

Others agree it's voter intimidation.

The Virginian-Pilot reports the man was outside the polling facility for about 45 minutes, and "was asked to leave by a police officer."

The Trump supporter "told campaign workers that he worked for Homeland Security and that he had '200 of those dogs' and he was headed to the border."