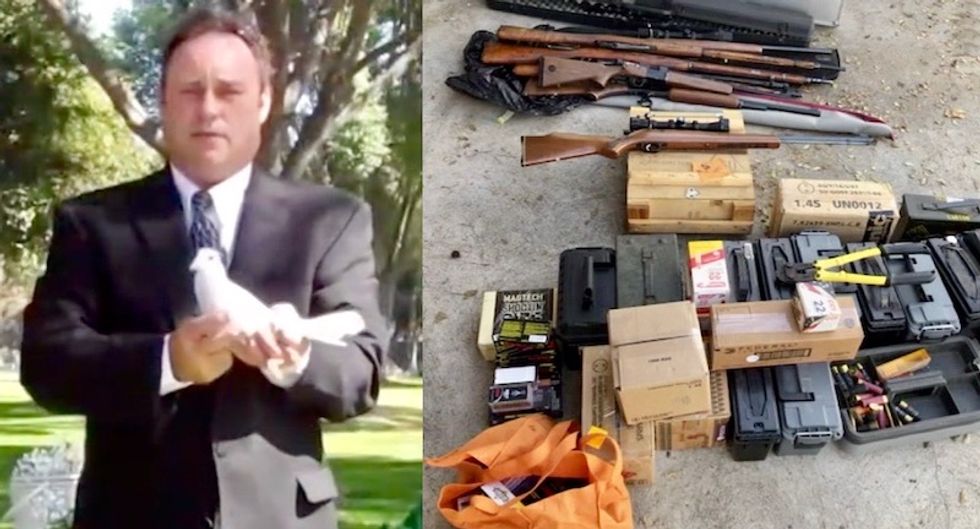 Mitchell Todd and his stockpile of guns/Screenshots

A man in Huntington Beach, California, was busted with an "arsenal" of 50 weapons and a trove of Nazi memorabilia, Fox 11 reports.

Mitchell Todd, 51, owns an Orange County business where he releases doves at events. Todd allegedly began threatening violence against a man who had hired him to release doves at his son’s funeral.

“The suspect had made a verbal threat stating words to the effect of, 'Maybe you need to go be with your son,'” said Sgt. Jim Cota of Laguna Beach PD. “You could tell the voicemails and text messages became more and more threatening, and then the tip of the iceberg was hearing the releasing of a handgun slide, so at that point we knew we were dealing with somebody whose got the potential of extreme violence.”

When police got a warrant to search his home, they found a Confederate flag, Nazi memorabilia and "an arsenal."

"We’re trying to figure out why one person would have in excess of 50 guns, at least in my career it’s stands up there with the top 5 in terms of firepower,” Cota said. “This is definitely an amount of weaponry that is not for personal use.”

The police said Todd is known as the “crazy guy” in his neighborhood, and has displayed the Nazi memorabilia.

According to ABC 7, only a few of the weapons were legally registered and federal authorities have been alerted.