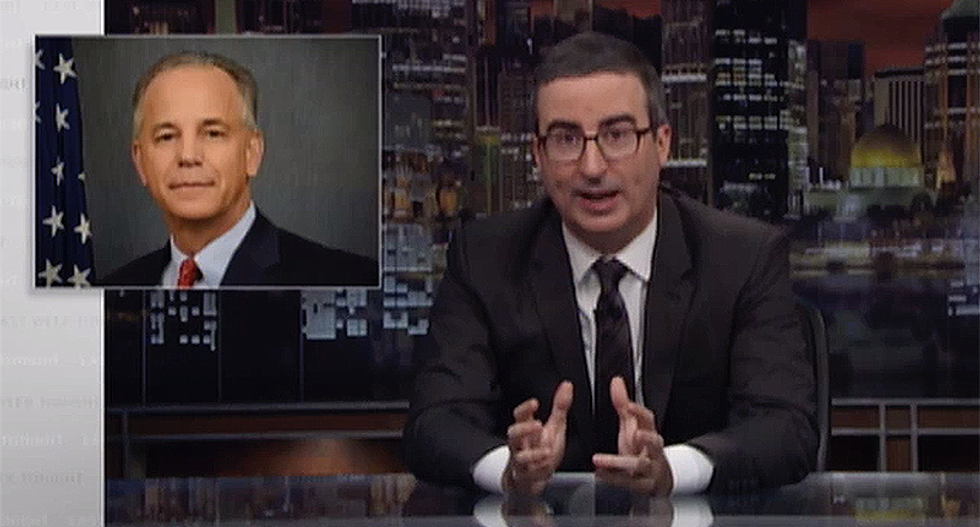 HBO host John Oliver gave out the cell phone number of the former Lt. Governor of Louisiana after showing two videos where the man gave it to oil and gas companies he's tasked with regulating. The alarm was sounded as part of a longer segment on the ways in which Trump has neglected to live up to his campaign promise to "drain the swamp."

Oliver began by explaining, the Bureau of Safety and Environmental Enforcement (BESEE) was created after the huge BP oil spill that dumped 12 times the amount of oil and gas into the Gulf of Mexico. The decision was made after it became obvious that the safety organization should not fall under the same department that collects oil and gas revenues from off-shore drilling. Except the Trump administration has tried to link the two together once again.

By appointing former Lt. Gov. Scott Angelle, he set the stage to deregulate off-shore drilling from the safety standards set after that massive 2010 spill that decimated the fishing and tourism industries in the Gulf. Angelle has been speaking regularly at conferences attended by oil and natural gas executives and has been giving out his government cell phone number.

"My cell number is," Angelle begins before reciting it to one crowd in 2017. "I'd rather you call me. Everything you text to me is a public record so be careful. This is a business, uh, opportunity for you to engage with me on what you believe we ought to be about."

Oliver reinforced that this is the man tasked with regulating the people he just gave his cell phone number asking them to give him a report on what he should be doing.

"Holy sh*t!" Oliver exclaimed. "That is outrageous for two reasons: First he's doing that to avoid the public record. And second, no one should ever call rather than text. I don't care what the scenario is. If you prefer calling to texting you're a f*cking psychopath."

Watch Oliver's full segment on the broken promise to "drain the swamp" below: