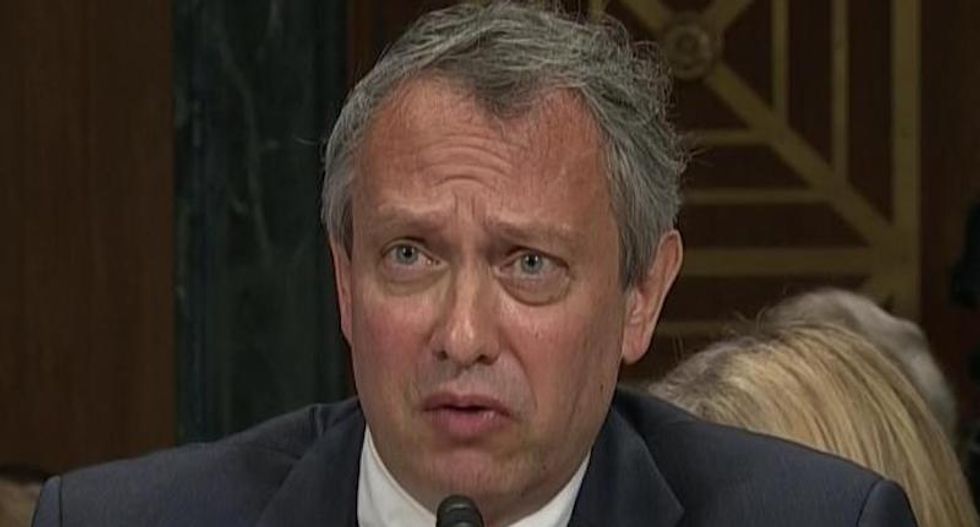 Trump judicial nominee Thomas Farr during his Senate hearing in 2017. Image via screengrab.

Senate Majority Leader Mitch McConnell on Thursday advanced the nomination of a judge who has been called a “segregationist” — and has ties to white supremacists.

In December 2017, the Southern Poverty Law Center revealed that Thomas Farr — a GOP judge re-nominated by Donald Trump after his initial nomination in 2017 was stalled by the Senate — had links to the scientific racism Pioneer Fund group.

Farr's link to the group created in 1937 to promote "race betterment" came "through his longtime boss and mentor, Thomas Ellis, the political mastermind behind the arch-segregationist Senator Jesse Helms," the SPLC noted. Ellis was a former director, grantee and "close associate" of the group.

Prior to the report on the judge's links to the Pioneer Fund, civil rights groups raised alarms about his previous rulings and actions — including his role in drafting and defending NC's "monster" voter ID law that a federal court struck down because it targeted black voters "with almost surgical precision."

In September 2017, the Rev. Dr. William J. Barber, II, a progressive activist with the NAACP, wrote a letter to the Senate urging them to withdraw Farr's nomination due to his "long record as an advocate for hyper-partisan, segregationist causes."

The conservative Washington Times outlet noted that Farr was first nominated in 2006 by President George W. Bush to fill a vacancy on the U.S. District Court for the Eastern District of North Carolina, but his nomination "languished" after Democrats took over the Senate. The seat has remained open ever since.