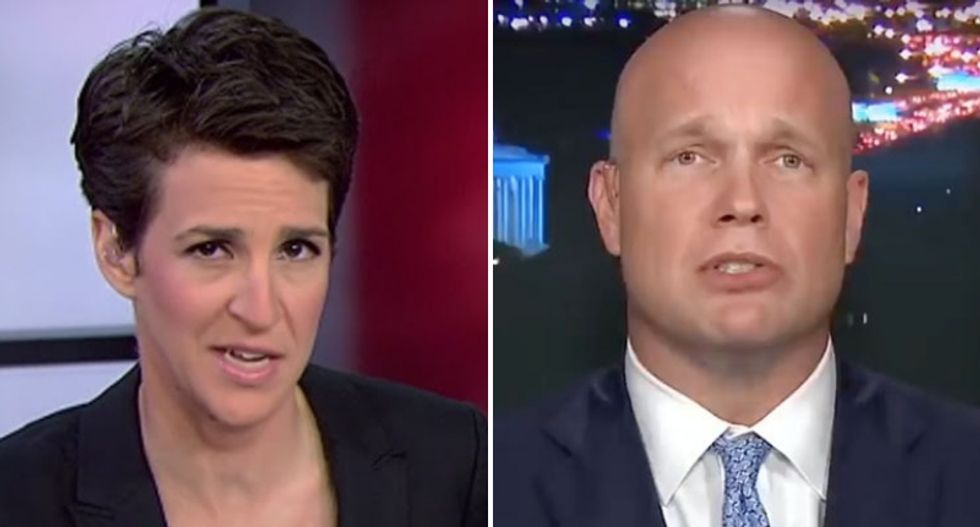 After revealing last week how Whitaker allegedly intimidated witnesses in the "scam" company whose board he sat on, Maddow noted that the man appointed by Donald Trump to lead the DOJ will be overseeing the FBI's investigation into that same company.

The host went on to note that on November 14, the Democrats who will in January lead multiple House committees sent multiple document requests about Whitaker's "scam" company, World Patent Marketing.

Those Democrats noted that "because the Senate was not given an opportunity to properly vet Mr. Whitaker’s background, serious questions are now arising about his fitness to serve in this position of trust," Politico reported.

World Patenet Marketing is, Maddow noted, just the beginning of "the big fat book of problems that Matt Whitaker" has since his promotion to AG, adding that the state of Maryland other entities have filed lawsuits questioning whether it's legal for him to lead the DOJ.

In another bizarre case, a Texas businessman named Doug Haning filed suit against the legality of Whitaker's appointment.

Politico reported that the businessman was accused of fraud by the government for his alleged "long-standing conspiracy to secretly blend chicken feathers and bones into what pet food companies were told was higher-grade chicken or turkey meal products.

A technicality in Haning's case led his lawyers to name former Attorney General Jeff Sessions as a defendant due to his role in prosecuting the case.

Now that Sessions has resigned, the Texas businessman "can now try to throw a wrench into the government's case against him by challenging the legitimacy of Matt Whitaker's appointment," Maddow said.

The host went on to note that Josh Blackman, a South Texas College of Law professor, told Politico that with Sessions' ouster, "there will be thousands of identical motions filed throughout the country" in the wake of the Haning case.

"Eventually, one judge will declare Whitaker not the acting AG," Blackman said. "That decision will throw the entire executive branch into disarray."