NASA counts down to landing of first Martian quake-sensor 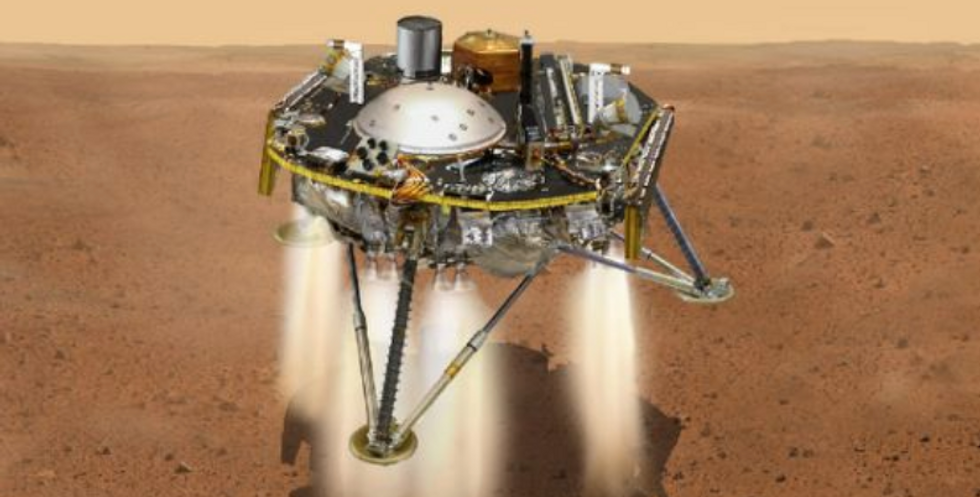 Mars InSight. The spacecraft stands about waist high, at 3.5 feet (one meter), and once its solar arrays are deployed they will span 20 feet (AFP Photo/HO)

NASA is counting down to a nail-biting touchdown Monday of the $993 million Mars InSight, the first spacecraft to listen for quakes and study the inner workings of another rocky planet.

No one is on board the spacecraft, which launched nearly seven months ago and has traveled some 300 million miles (482 million kilometers).

But part of its mission is to inform efforts to one day send human explorers to the Red Planet, which NASA hopes to do by the 2030s.

The lander is the first to reach Mars since 2012, when NASA's Curiosity rover touched down to scour the surface and analyze rocks for signs that life forms may once have inhabited Earth's neighbor, now a frigid and dry planet.

InSight must survive tense entry into Mars' atmosphere, traveling at a speed of 12,300 miles (19,800 kilometers) per hour and swiftly slowing to just five mph (eight kph).

This entry, descent and landing phase begins at 11:47 am in California (1947 GMT) -- and is only half-jokingly referred to at NASA as "Six and a Half Minutes of Terror."

Of 43 missions launched toward Mars, only 18 have made it intact -- a success rate of around 40 percent. All those that made it came from the United States.

"The exciting part is we are building on the success of the best team that has ever landed on this planet, which is the NASA team with its contractors and its collaborators."

The spacecraft itself stands about waist high, at 3.5 feet (one meter), and once its solar arrays are deployed they will span 20 feet.

Fully fueled, InSight weighs more than 800 pounds (360 kg), about the same as a Harley Davidson motorcycle.

Its central instrument is a quake-sensing seismometer that was made by the French Space Agency (CNES).

"This is the only NASA mission until now which is conceived around a foreign-made instrument," Jean-Yves Le Gall, president of CNES, told AFP.

"So it's a mission that is fundamentally for the United States, for France and for improving our understanding of Mars."

The six quake sensors on board are so sensitive they should reveal the smallest tremors on Mars, such as the faint pull of its moon Phobos, impacts from meteors, and possibly evidence of volcanic activity.

Seismology has taught humanity much about the formation of Earth some 4.5 billion years ago, but much of the Earth-based evidence has been lost to the recycling of the crust, driven by plate tectonics. This process doesn't exist on Mars.

The spacecraft also has a self-hammering probe that can burrow as deep as 10-16 feet (3-5 meters), offering the first precise measurement of below-ground temperatures on Mars and how much heat escapes from its interior.

InSight was built by Lockheed Martin, and is modeled after the Phoenix spacecraft that landed near the Martian north pole in 2008.

Like Phoenix, InSight's arrival will be aided by a parachute. Its heat shield will help slow down the spacecraft and protect against the hot friction of entering Mars' atmosphere.

Its landing site is flat area called Elysium Planitia, which NASA has called "the biggest parking lot on Mars."

The lander must set itself down upright. And then, another critical step is for the solar arrays to deploy, since the lander's one-year mission will be fully solar-powered.

NASA should know within minutes if the landing went well or not, but will have to wait more than five hours for confirmation of the solar array deployment, due to the orbit pattern of the Mars Reconnaissance Orbiter and Mars Odyssey which can communicate InSight's status back to Earth.

That first confirming ping at 2004 GMT Monday is eagerly awaited by the crew at mission control at NASA's Jet Propulsion Laboratory in Pasadena, California.

"I do have a lot of blood sweat and tears invested in this, and I am looking forward to a nice, safe touchdown on Monday," said Stu Spath, InSight program manager at Lockheed Martin.