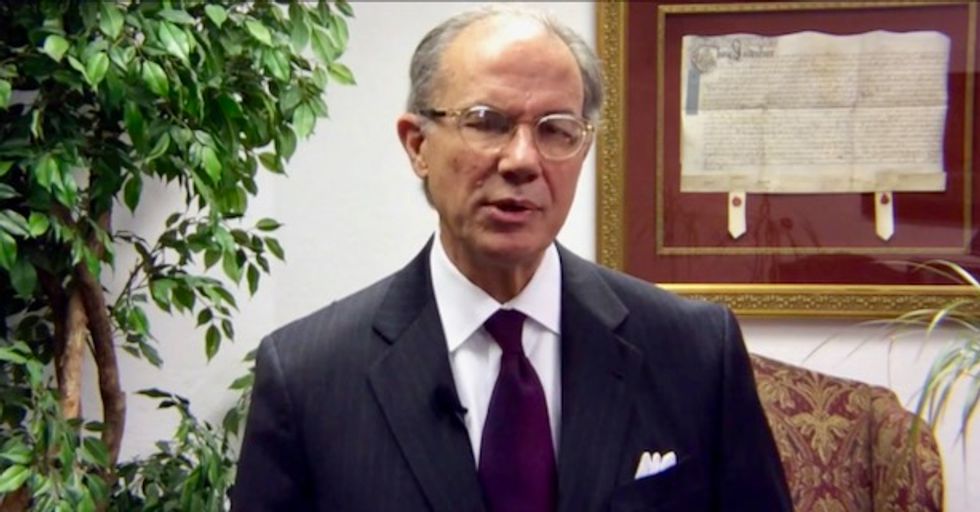 Oklahoma voters just elected Republican mortgage banker Kevin Stitt, a newcomer to politics, to become their new governor. And Stitt has just hired the head of his transition team, a man who will help shape policy, direction, and choose the players to implement his vision for the future of the "Sooner State." That man is no political neophyte.

Most Americans probably have never heard of Marc Nuttle (photo), but you may have been affected by some of his work. Before becoming the Chairman of a far right wing, dominionist, anti-gay, Christian organization, Nuttle (according to his bio) advised five presidents and the served as an advisor to anti-gay climate change denialist and far right wing extremist Senator Jim Inhofe.

If you think you're starting to get the picture of who Marc Nuttle is, you're right, but there's much, much more.

Nuttle just resigned after seven years as chairman of the board of The Oak Initiative. The Christian group's goal is to create a nationwide and international "spiritual awakening" and "champion the core values that are based on biblical or kingdom principles and wisdom."

And to do that, as Friendly Atheist's Hemant Mehta reports, Nuttle has surrounded the organization with what reads like a who's who of far right wing anti-gay Christian extremists.

Mehta details some of the board members and their accomplishments, including "retired Lt. General Jerry Boykin who once said Jesus would return to kill his enemies with an AR-15. Another board member is Cindy Jacobs, whose claimed to help a woman grow three inches instantaneously and also said she once literally turned metal into bone. And there’s Lance Wallnau, who thinks the critics of Donald Trump are controlled by Satan. And Janet Porter, who thinks gay people are setting the world on fire. It’s just a collection of the most mindless, reactionary, brainwashed Christians you can imagine."

These are the people he has either installed or accepted to help him lead his religious organization.

Each of them have been written about by the Southern Poverty Law Center.

Imagine who he will choose in deeply red, deeply anti-LGBT Oklahoma, to advance the incoming governor's agenda, an agenda he will shape and help enact.

"Some of its controversial actions include a 2015 bulletin posted on its website from its president, MorningStar Ministries founder Rick Joyner, saying the 2015 Supreme Court ruling that legalized gay marriage was a 'dress rehearsal' for the biblical end of times and compared it to the 'mark of the beast.' The bulletin additionally called the 'gay agenda' the biggest 'enemy of Christianity in America.'"

"The group also faced backlash in 2015 from gay-rights groups after the Michigan chapter of the Oak Initiative set up billboards that showed a gay man with a rainbow painted on his face surrounded by the words 'Not Born this Way' and 'Homosexuality is a behavior. Not a civil right.'"

Here's how they advance their message on social media:

Oklahomans should be concerned – and aware of what's about to happen.