North Korean soldier, who defected in a hail of bullets, is a general's son 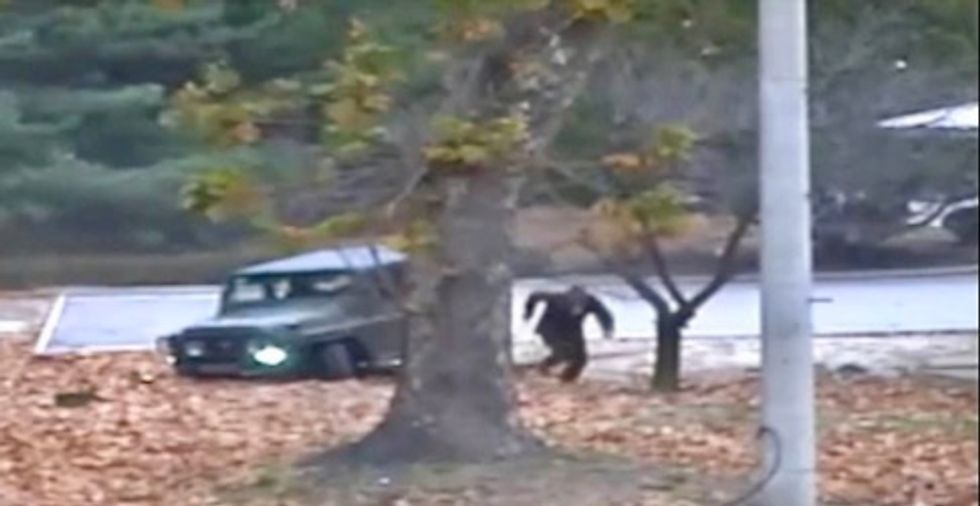 The North Korean soldier who defected to the South in a hail of bullets last year is a general's son but says most Northerners of his age have no loyalty to Kim Jong Un, according to a Japanese newspaper.

Oh Chong Song's dramatic dash across the border at the Panmunjom truce village in the Demilitarized Zone -- under fire from his comrades -- made global headlines last year, and saw him hospitalised with serious injuries.

It is very rare for the North's troops to defect at Panmunjom, a major tourist attraction and the only place on the frontier where forces from the two sides come face-to-face.

The 25-year-old Oh is the son of a major-general, Japan's Sankei Shimbun newspaper reported, in what it said was the defector's first media interview.

But despite his privileged birth -- he described himself as "upper class" -- he felt no allegiance to the North's leadership.

UNITED NATIONS COMMAND/AFP/File / HandoutOh lay bleeding in a pile of leaves after he made it over the border, and was pulled to safety by South Korean soldiers

"Inside the North, people, and especially the younger generation, are indifferent to each other, politics, and their leaders, and there is no sense of loyalty."

He was "indifferent" to the rule of Kim Jong Un, the third generation of the Kim family to lead the North, and had no interest in how his friends felt about it.

"Probably 80 percent of my generation is indifferent and has no loyalty," he was quoted as saying.

"It is natural to have no interest nor loyalty since the hereditary system is taken as a given, regardless of its inability to feed people."

Oh denied media reports in the South that he was wanted for murder in the North.

After some unspecified trouble with friends, the Sankei said, he started drinking. On his way back to his post he broke through a checkpoint and, fearing execution, decided to keep going.

"I feared I could be executed if I went back so I crossed the border," he was quoted as saying, adding he had no regrets about defecting.

A short clip posted by the Sankei Shimbun on its website shows him wearing a black jacket and a white top, speaking with a slight North Korean accent. His face is not revealed.

Seoul's unification ministry -- which handles inter-Korean affairs including the resettlement of defectors -- declined to comment on the interview and said it does not keep tabs on defectors after they are released from resettlement centres.

Lee Cook-jong, the South Korean doctor who treated Oh, told a radio interview last month that the defector had secured a job and bought a car, adding he had nearly lost his North Korean accent.

The geopolitical landscape around the Korean peninsula has shifted dramatically since last year when US President Donald Trump threatened to rain "fire and fury" on the nuclear-armed North Korea.

"I really felt that we were on the verge of war with the US," Oh was quoted as saying. "The tension (that I felt) trickled down from the top."

Now a rapid rapprochement has taken hold on the peninsula and troops in the border truce village where he defected are to be disarmed.

Oh said he understands the former comrades who shot him.

"If they didn't shoot they would face heavy punishment," he said. "So if I was them, I would have done the same."