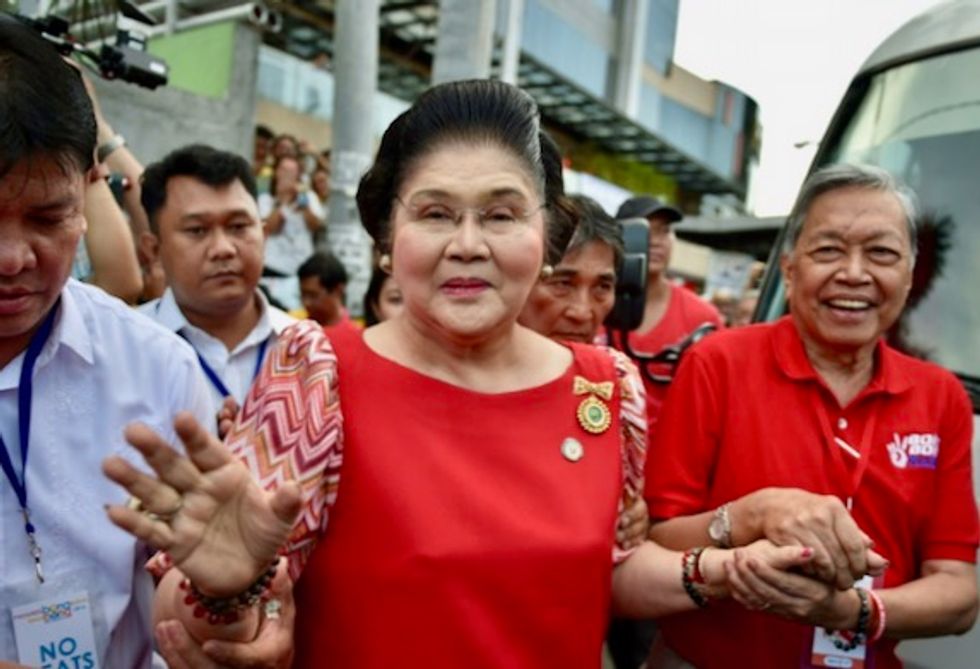 Imelda Marcos was found guilty of corruption on Friday and handed a lengthy prison term in a rare conviction for the former Philippine first lady accused with her late dictator husband of embezzling billions of dollars from state coffers.

However, it was unlikely 89-year-old Marcos would spend much time behind bars as she is allowed to appeal the ruling and can remain free on bail as long as the conviction is not final.

The verdict from the anti-graft Sandiganbayan court orders her to serve a minimum of six years behind bars for each of the seven charges that the Marcoses funnelled roughly $200 million through Swiss foundations decades ago.

This leaves her potentially facing decades in prison, however the exact length of the term was not immediately clear.

Ferdinand Marcos, who along with his cronies was accused of pilfering $10 billion from the Philippines, fled with his family to the US after a people's uprising ended his 20-year rule in 1986.

Marcos died in 1989 while still in exile. But his heirs later returned to Manila and have since staged a political comeback. Imelda Marcos is currently a congresswoman.

As a government official in the Marcos administration, Imelda was barred by law from having any outside financial interests, including in the Swiss foundations.

"The couple opened all those accounts in Switzerland, and they used pseudonyms to hide their ownership. The president chose William Saunders and Imelda Marcos used Jane Ryan," special prosecutor Ryan Quilala told reporters.

Marcos, in a written statement to reporters, said her lawyer Manuel Lazaro plans to lodge an appeal with the anti-graft court.

"He is presently studying the decision and has advised us that he intends to file a motion for reconsideration," she added.

Marcos critics rejoiced at the news of the conviction, which came nearly three decades after the case was filed in 1991.

"This points to how long and therefore frustrating the Philippine judicial system is," said opposition lawmaker Francis Pangilinan.

"We hope our courts will see this through... and give no special treatment to Mrs. Marcos," he added.

Court officials said Marcos, who was not at Friday's hearing, would be able to avoid incarceration by posting an as yet undetermined bail. She has the right to appeal her conviction to the Supreme Court.

AFP/File / Ted ALJIBEImelda Marcos' husband, the former leader Ferdinand Marcos, died in 1989 while still in exile but his heirs later returned to Manila

The court has previously undone at least one case against Imelda, overturning a 24 year jail sentence in 1993 on graft charges. She ran for congress and won while her appeal was underway.

The family's notoriety stems back to Ferdinand Marcos declaring martial law in 1972. That allowed him to shutter the legislature, muzzle the free press and jail or kill those who dared to oppose his dictatorship.

In the decades since his ouster the effort to recover the pilfered money has been halting and uneven.

However, the Philippine Supreme Court in 2003 ordered $680 million in funds stashed by the Marcoses in Swiss banks be handed to the government.

The funds had earlier been turned over by the Swiss judiciary after concluding that the funds were stolen from the Manila government.

The younger generation of Marcoses have led high-profile careers, despite the dark past associated with their name.

Imelda and Ferdinand's daughter Imee Marcos is the governor of the family's northern stronghold of Ilocos Norte province and helped bankroll the 2016 election campaign of President Rodrigo Duterte, according to him.

He has put the count under protest and hopes to run for president after Duterte's term ends in mid-2022.