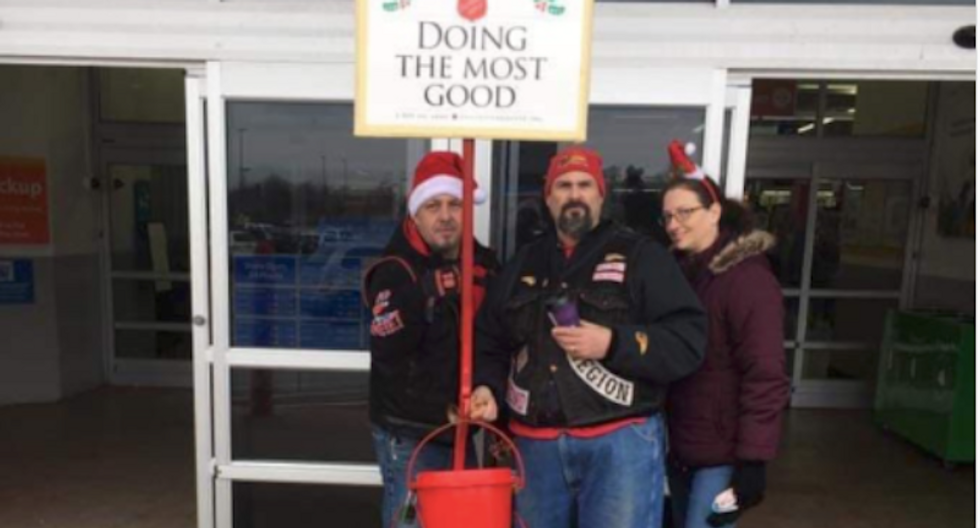 Indiana residents were horrified over the holiday weekend when a photograph of white supremacists ringing bells for the Salvation Army appeared on social media, according to the The Times of Northwest Indiana.

In the Facebook post (which has since been taken down), the members of The Hell’s Angels Northwest Indiana Region Motorcycle Club could be seen brandishing patches that read "Aryan" and "WAR," which stands for White Aryan Resistance.

A representative of the Walmart where they were trying to collect donations said that they were asked to leave after customers complained, according to CBS Chicago.

After the post went viral, a woman who'd accompanied the men tried to change the discussion.

“That’s the profiling bullshit we all have to deal with all the time you’re no better than anybody else,” she wrote in one response. “What you all are doing is a form of bullying. And profiling,” she said.

Lt. Christopher Nicolai, of The Salvation Army of Porter County, told The Times of Northwest Indiana that the bell ringers in question would not be allowed to volunteer in the future.

"Our commitment to nondiscrimination includes a dress code for bell ringers, requiring that they wear red Salvation Army aprons, and making it clear that no "symbol, marking or lettering that is viewed as discrimination" may be worn, Nicolai said in the statement. "Clearly, the bell ringers in question did not comply with this dress code. They will not be allowed to volunteer in the future. We are embarrassed that we were unable to prevent this incident, and apologize to all who were offended, as were we."