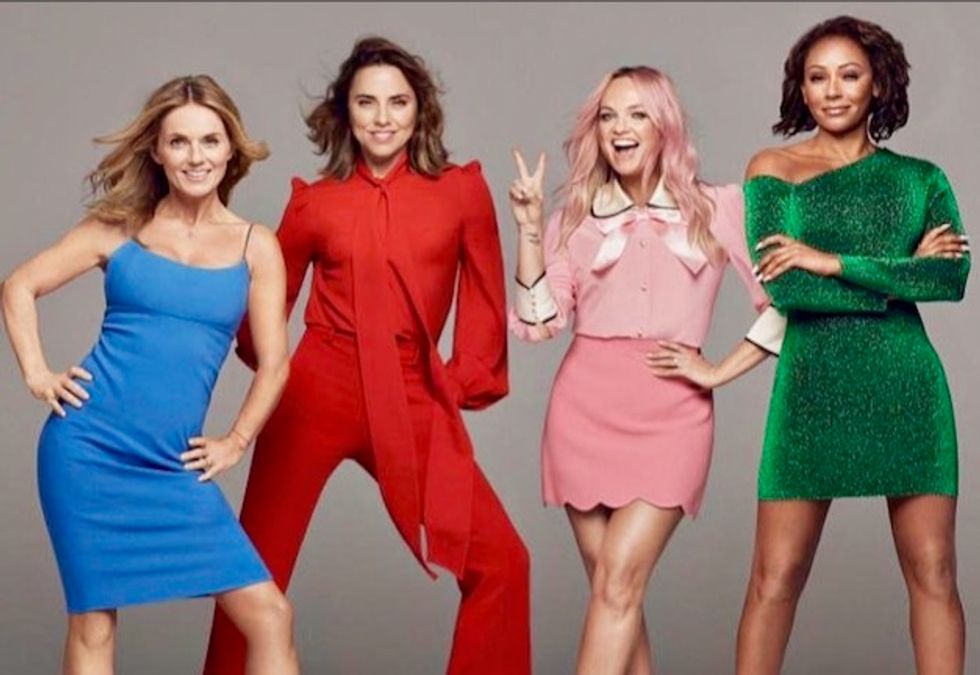 Say You'll Be There: Best-selling 90s girl band the Spice Girls promise to give fans what they really, really want on a UK reunion tour next year.

In a video shared on the band's newly created Twitter account, the four remaining members staged a mock news broadcast to confirm rumours of the tour.

Beckham, also known as Posh Spice, later posted a photo of the foursome on social media alongside a statement.

"I won't be joining my girls on stage again but being in the Spice Girls was a hugely important part of my life and I wish my girls so much love and fun as they go back on tour," she wrote on Instagram.

The pop phenomenon's announcement sparked celebration from fans on social media, including from British singer Adele who shared a throwback childhood photo of herself posing excitedly in front of magazine posters of the band on her bedroom wall.

"This is how I feel right now! I am ready," she added on Instagram.

The band's official Twitter account, which promised a "new generation of girl power" was flooded with a frenzy of posts from nostalgic fans.

"The Spice Girls performing in my home town! I need to sit down. I can't breathe!!" tweeted Wez from Sunderland.

The tour will take in six British cities next year, including Manchester on June 1, the Scottish capital Edinburgh a week later and culminating at Wembley on June 15.

Ahead of the announcement, Melanie Brown (also known as Mel B and Scary Spice) left the door open to Beckham's possible involvement.

"It's just the four of us that are fully confirmed, but you know, Vic might join us at some point," she told Britain's ITV network.

"She's got a full-on life with all of her work commitments and her fashion line and her kids, so, she's just kind of not committing just yet," Brown added.

The group stormed to worldwide fame in 1996 after the release of their first single "Wannabe", spreading their message of girl power, eventually going on to sell 85 million albums worldwide.

Only two of their 11 singles failed to reach number one on the British charts, while their first three singles all hit the US top five.

They got together again to perform at the London 2012 Olympics closing ceremony and also collaborated then for the launch of the Spice Girls musical "Viva Forever!".

An expected comeback in 2016 with three bandmates failed to materialise.

Tickets for the new tour will go on sale on Saturday.