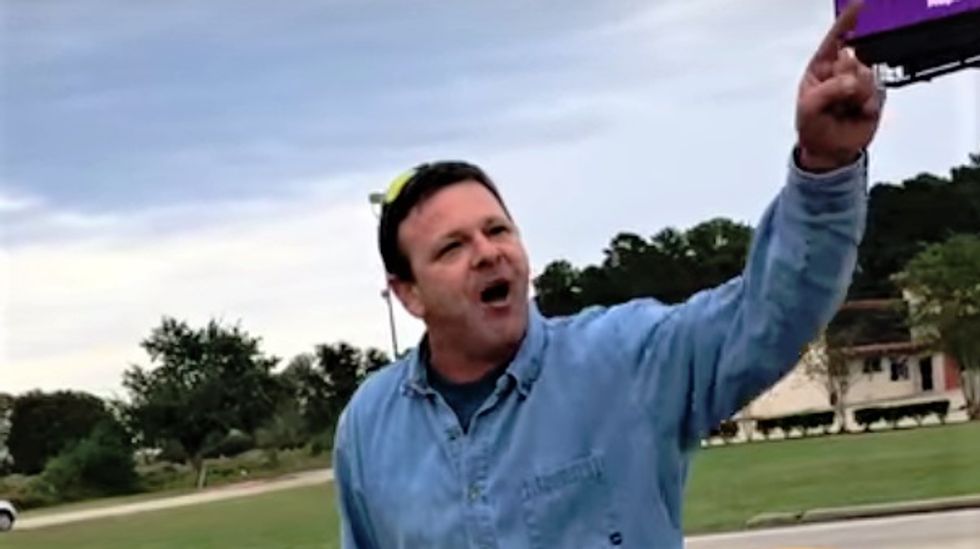 A Texas conservative was caught on camera over the weekend freaking out at people in his state who were protesting against Confederate monuments.

In a video posted by YouTube user Jeremy Parzen, the man approaches a group of protesters who are standing on a street corner and tells them that they need a permit to demonstrate.

After they inform him that they don't need a permit, he begins insulting them.

"It's people like y'all that are destroying America's history!" he shouted, despite the fact that the Confederacy was not part of the United States of America and was defeated by the U.S. military during the Civil War. "You're damn dumb-ass Democrats!"

"Why are you so angry, sir?" asked a woman who was protesting the monuments.

"Because of stupid idiots like y'all," he replied. "Look what y'all are doing to our country! You're a bunch of damn idiots! You try to destroy our heritage, you're tearing down monuments!"

He then called the protesters "f*cking idiots" who "don't deserve to be in this g*ddamn country."

"You don't like it, take your ass home!" he said, again not recognizing that the protesters were actually demonstrating against a country that hasn't formally existed for more than 150 years.

As the man walked away in disgust, the woman told him that Jesus loved him.

"Yeah, you're damn right he does," the man replied. "But he f*cking hates you!"