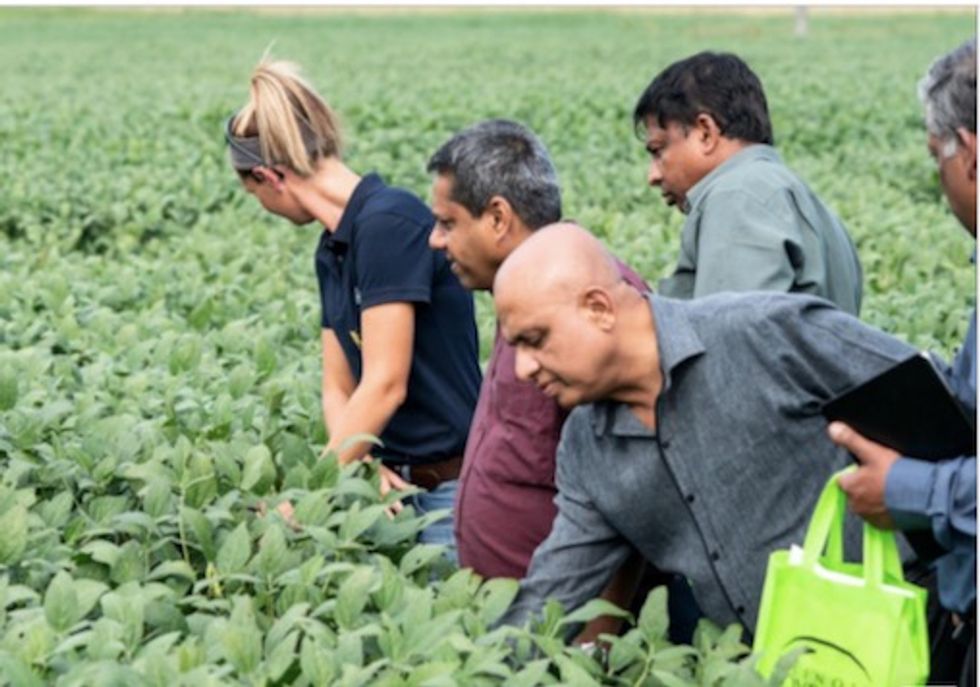 Clouds crowded the Illinois sky as Nick Harre walked away from his combine at the peak of harvest to join four fellow farmers in greeting some unlikely visitors.

Inside a nearby seed barn, they made their pitch to eight Sri Lankan government officials: Please buy our soybeans.

The wooing of such a tiny market underscores the depth of U.S. farmers’ problems after losing their biggest customer, China, to a global trade war.

U.S. farmers would need about 11,000 markets the size of Sri Lanka to replace Chinese soybean purchases, but these days many growers will take any shred of new business they can get. A small but growing number of farmers have all but given up waiting for diplomatic solutions and started scrambling themselves to help open new markets and salvage existing ones disrupted by tariffs, according to dozens of interviews with producers, industry officials and trade lobbying groups.

They are lobbying lawmakers, joining overseas trade trips, and hosting prospective buyers – often while neglecting or passing off farm duties during harvest.

Some tried jumping into politics as Democratic candidates this year, but had little success: Fifth-generation Pennsylvania dairy farmer Denny Wolff lost his fight for a Congressional seat, as did Mississippi poultry farmer Michael Evans - who is pro-life, pro-gun and anti-tariffs.

Harre, 29, a third-generation dairy and grain farmer, said he’d rather talk directly to importers than trust the task to Washington.

“I could care less about the politics, to be honest,” he said. “We’re lacking people advocating for us. If someone’s going to be telling our story, I’d rather it be myself.”

The grassroots movement comes as the agrarian economy is in its fifth year of financial woe, with oversupply undermining revenues. Corn and soybean prices are hovering near decade lows, and this year’s bumper harvest is further swelling U.S. farmers’ massive stocks of unsold grain.

U.S. net farm income will fall to $65.7 billion this year, down 47 percent from just five years ago, the U.S. Department of Agriculture (USDA) forecasts.

(For a graphic on falling U.S. farm exports, see: tmsnrt.rs/2PBPKjx.)

“If we can get buyers to step away from the politics and see us as people, we can get them to trust us – even if they can’t trust Washington,” said Doug Schroeder, a fifth-generation farmer in Bellflower, Illinois. “If we can do that, they will want to buy from us again when the trade war ends.”

“As long as we’re still in business, of course.”

As tensions with China escalated, Schroeder, 57, reached out to neighbors and fellow farmers at the state soybean association, offering to host overseas buyers.

“I’d do anything to get them back,” Schroeder said.

In mid-September, some 20 Chinese buyers arrived at his farm in a bus, a visit set up through the U.S. Soybean Export Council, an industry group. Schroeder’s 89-year-old mother baked them chocolate chip cookies.

When they arrived, adding a new stop to their annual tour of the U.S. Midwest to survey soybean fields, their response was polite, but awkward.

“We value your business,” Schroeder told them repeatedly.

The visitors said nothing, looking at the ground. They declined the cookies.

“This isn’t going to work,” Schroeder recalled thinking at the time.

LOSING ‘A GENERATION’ OF FARMERS

A pile-up of farm work made Duane Aistrope turn down two invitations to visit China with trade groups this year before most tariffs took effect.

But as soybean prices plummeted in August, and Trump threatened to hit China with more tariffs, Aistrope dropped his chores and jumped on a plane to China for a trade mission arranged by the U.S. Grains Council, a industry group financed in part with taxpayer money.

He spent 10 days traveling with other farmers, visiting two dairy farms and meeting importers at a large feed maker.

They struck no deals; Chinese importers said they saw buying U.S. soybeans as politically untenable even if their prices continue to fall. Aistrope was left to hope his visit might make a difference in winning buyers back if the trade war ends.

Back his farm in rural Randolph, Iowa, a friend helped empty out the last of Aistrope’s corn bins to make room for harvest, hauling truckloads of grain to a local ethanol plant.

Aistrope, 61, is losing money on every bushel of corn and soy. He worries more about younger growers.

“If something doesn’t happen soon,” he said, “we’re going to lose a generation of farmers.”

A WIN BY WASHINGTON STANDARDS

In Washington, the trade-war spin is far more optimistic.

Trump last month hailed a renegotiated trade pact with Canada and Mexico as a huge win for U.S. workers and farmers. This year, USDA Under Secretary for Trade and Foreign Agricultural Affairs Ted McKinney has doubled the number of trade missions the agency takes, inviting farm groups and agricultural businesses to join him.

One trip this spring resulted in Honduras, Guatemala and El Salvador agreeing to jointly spend $49 million over the next 12 months on U.S. agricultural goods ranging from feed grains to wine.

McKinney described the deal as the largest financial agreement USDA had ever signed from a trade trip. But in the world of commodity exports, it amounts to a rounding error, equal to 0.035 percent of 2017 U.S. agricultural exports.

“Every journey of ten, a hundred, a thousand miles begins as a single step,” he said.

Taiwanese buyers were particularly eager to visit the United States this year because U.S. prices had fallen dramatically and because China had gobbled up most South American soybeans in a shift to avoid tariffs on U.S. crops.

For years, Minnesota farm groups have courted importers from Taiwan, which last year was the sixth largest buyer of U.S. corn and soybeans.

When the buyers arrived in September to sign a letter of intent to purchase up to 3.9 million tonnes of U.S. soybeans - potentially Taiwan’s biggest purchases in a decade - farmer Kevin Paap, president of the Minnesota Farm Bureau, jumped into his SUV and raced to Governor Mark Dayton’s residence in St. Paul to meet the Taiwanese buyers.

The deal was promising - but a ceremonial signing rather than a firm commitment. Paap said he remains confident Taiwan will come through, eventually.

For Harre and the Illinois farmers gathered inside the seed building in September, every market is worth chasing - including Sri Lanka.

Fourth-generation grain farmer David Droste cleared his throat, greeted the visitors and herded them inside a kitchen, taking questions on crop yields, seed traits and soybean exports. The group spent three days in the Midwest partly because low U.S. soybean prices had intrigued buyers back home.

W.M.W. Weerakoon, an agronomist and director general at the Sri Lankan Department of Agriculture, asked about the impact of Chinese tariffs on U.S. farmers.

The Americans winced. Droste explained that they had spent years growing more crops to export and now had no place to sell them.

Weerakoon smiled, without committing to anything, and the two men walked side-by-side into Droste’s soybean field.

Reporting by P.J. Huffstutter in Addieville, Illinois, and Chicago, and Karl Plume in Chicago; Editing by Caroline Stauffer and Brian Thevenot