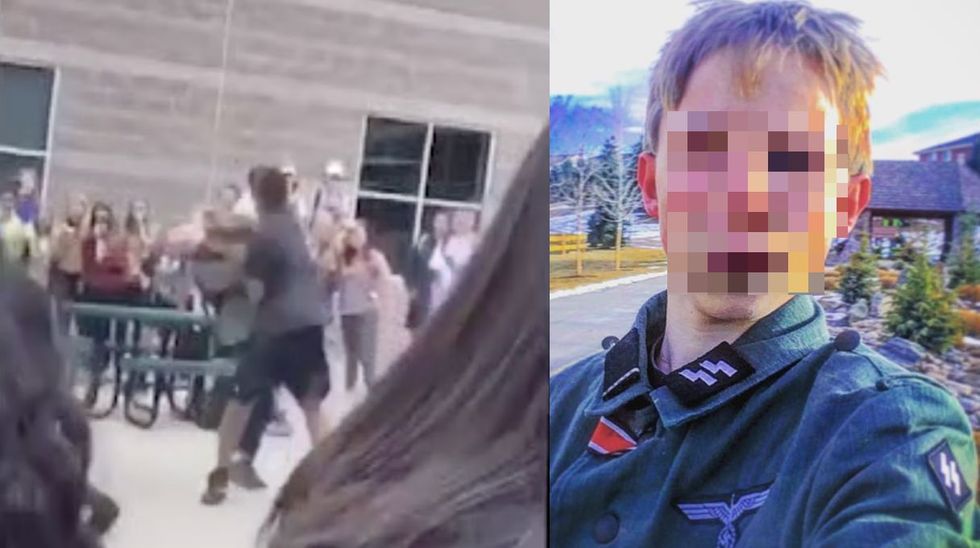 A white teen wearing a Nazi uniform jacket is punched by a black classmate in Colorado (left via screenshot)) and the student posing in the jacket (right, via Instagram).

A viral video filmed inside a Denver high school shows a white student wearing a Nazi uniform jacket getting punched by his black classmate -- and research into the white student's background showed he posed with other anti-Semitic memorabilia.

The Denver Post reported that the video shared by Baltimore-based graphic designer Benjamin Jancewicz was shot in August at Mountain Vista High School in the Denver suburbs.

In the video, which was recorded on Snapchat and set to LL Cool J's 1990 hit "Mama Said Knock You Out" to preserve the anonymity of the students, the black teen is seen punching his white classmate in the head.

The Denver Post reported that the white student was recorded doing a "T-pose," a gaming meme that Lt. Lori Bronner, Douglas County Sheriff’s Office spokeswoman, said has been associated with "the KKK to represent a burning cross."

The report and Jancewicz both noted that the white student called his black classmate a racial slur, though it's unclear if he said it before or after the student punched him. The student in the Nazi jacket then reportedly tried to throw a rock at the other teen, who later kicked him while he was on the ground.

Jancewicz noted on Twitter that Mountain Vista High School had its share of problems in the past, including racist graffiti that was directed at black coaches at the school.

The school also was home to two students who plotted to "recreate Columbine" there as well, the graphic designer noted on Twitter.

Jancewicz said he was sent social media profiles said to belong to the white student in the Nazi jacket that show his apparent fixation with Nazi symbolism and memorabilia.

In the photos and videos the Baltimore designer posted, the teen described by the Denver Post as a high school freshman is seen posing with a flag bearing an Iron Cross and a Soviet flag and wearing the same jacket he appeared to be wearing in the video.

You can watch video of the incident below: