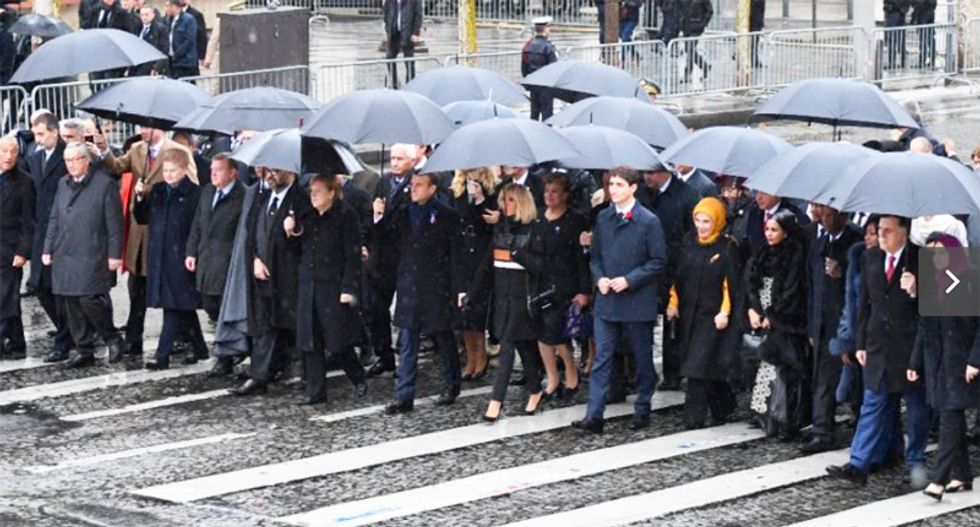 World leaders arrive at the Arc de Triomphe in Paris on November 11, 2018 to attend a ceremony as part of commemorations marking the 100th anniversary of the 11 November 1918 armistice ending World War I (AFP Photo/Eric FEFERBERG)

US President Donald Trump, his Russian counterpart Vladimir Putin and dozens of other world leaders joined France's Emmanuel Macron in commemorating the centenary of the end of World War I in a solemn ceremony in Paris on Sunday.

The ceremony at the foot of the Arc de Triomphe war memorial on the Champs-Elysees marked the culmination of events for the 100th anniversary of the end of the four-year onflict which claimed 18 million lives.

Macron led dozens of heads of state and government including German Chancellor Angela Merkel and Canadian Prime Minister Justin Trudeau, on foot towards a viewing stand at the tomb of the Unknown Soldier under the Arc de Triopmhe.

Trump and Putin arrived separately from other leaders at the commemorations, which took place in the rain.

Minutes before the start of the ceremony two topless protesters from the radical feminist group Femen attempted to waylay Trump's motorcade as it rolled up the Champs-Elysees. They were immediately overpowered by police.

Putin was one of the last to take his place among the ceremony, on the front row next to Macron's wife Brigitte.

Putin shook hands on arrival with Trump, and Trump also shook hands with Merkel and some of the other leaders placed next to him but pointedly did not extend a hand to Trudeau, whom he disparaged earlier this year as "dishonest and weak.

Over 3,400 people, including veterans of the armed forces of France and its allies, were invited to the ceremony, which began with a rendition of the Marseillaise and a review by Macron of cadets from France's military schools.

Cadets from West Point military academy in the US took part in the commemorations, alongside members of France's Republican Guard resplendent in plumed hats and uniforms red epaulettes.

French-born Chinese American cellist Yo-Yo Ma played a Sarabande from Bach's 5th cello suite and schoolchildren read accounts of soldiers from eight countries who served in the war, in their native language.

There were also tributes to troops from African countries, with Beninese star Angelique Kidjo performing a song to lives lost on behalf of the former colonial power.

The rain added to the solemnity of the occasion, with Macron eschewing an umbrella as he remembered the suffering of those who fought in the so-called "war to end all wars" in a speech.

On Saturday, Trump cited the bad weather for his decision to cancel a visit to an American cemetery in northern France -- a decision for which drew criticism.