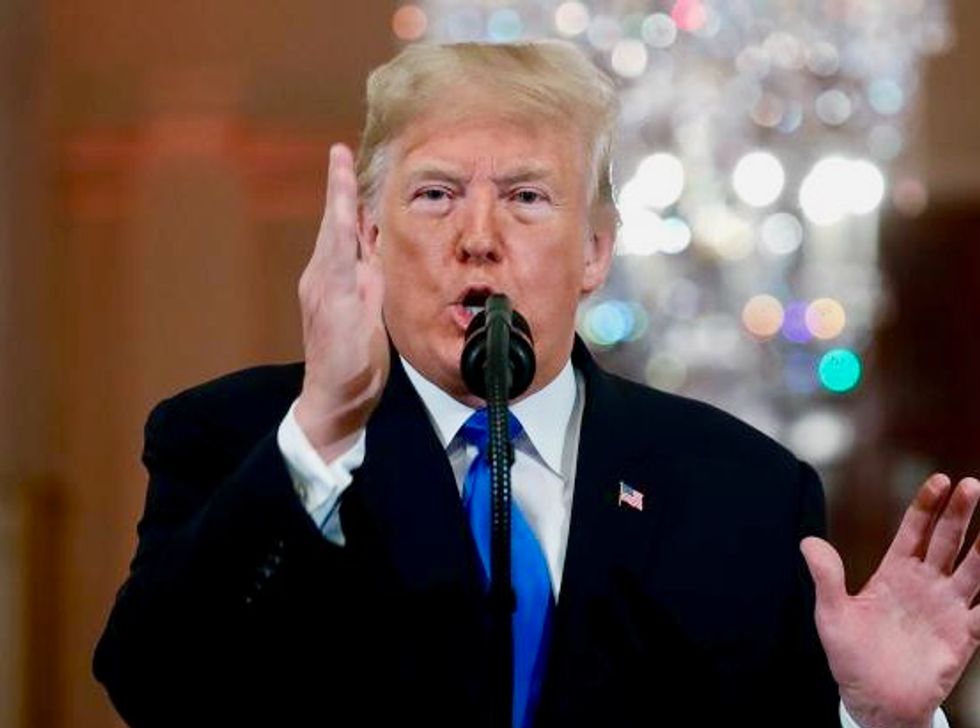 Yale psychiatry professor Bandy X. Lee does not diagnose lightly. In fact, she emphasizes that her theory about the mental state of President Donald Trump does not reflect the professional opinion of any of the institutions that she is affiliated with, including the Yale School of Medicine.

Nevertheless, she tells Raw Story that it's her opinion that rather than acting strategically, Trump's pattern of behavior shows signs of severe psychological distress and that both Trump and his supporters are self-destructively spiraling in a way that spells dire trouble for the nation and the world.

Conversation edited for clarity below:

Tana Ganeva: Can you explain your theory about Donald Trump's mental state, that the behavior is pathological rather than strategic?

Professor Bandy X. Lee: What mental health professionals look at are patterns. Patterns of his behavior. Oftentimes Trump's assertions don't bring him the advantages that strategy would.

It fits a pattern more of someone acting that is driven by emotional compulsions. It's the emotional need to reframe situations. For example, the idea that the midterm elections are a win for him and if not, it's seen as a fraudulent election.

Whereas this reframing may be effective for those who are relatively uninformed and are emotionally predisposed to believing Mr. Trump because of their emotional dependence.

Trump and his supporters ... both of their defects fit like a lock and key to fulfill each other's emotional needs. It's why we see the phenomenon of his base not abandoning him, even at great cost to themselves. This can be explained through their emotional wounds and it is not necessarily consciously strategic.

In other words, when we say strategy we think of logical, organized planning. And sometimes pathological symptoms can seem very effective, because when you have rationality and logic removed, you have a very, very strong emotional component that takes over.

And that can manifest ... that can sometimes be incredibly powerful, not only because it overwhelms and overpowers those who are logical and rational but also the .... lesser of the psyche takes over. The psyche operates in layers.

The lesser layers may be less logical and less healthy ... but when they take over they can be very powerful. Far more powerful than logical planning.

Tana Ganeva: Isn't voting always an emotional decision? Does anyone really vote in their own self-interest?

And it's almost regardless of intention. It's regardless of what a person's stated desire is. When an individual becomes too ill ... as mental health professionals we have to act to protect them against the illness, even if it's against their will sometimes.

Once we treat them they realize how overtaken they were by the illness. Even kicking and screaming they later come back and thank you for the treatment. Their state at the time of illness is not necessarily the person's conscious thought or desire when they are well.

So this can happen to varying degrees. Individuals can choose courses for themselves that are life-affirming versus course that cause damage and destruction. They may consciously ... believe those choices are good for them but they're actually choosing a self-destructive course.

Tana Ganeva: Would one say that about the President?

In my opinion I believe so because he is driven by pathology rather than healthy choices. He'll make choices that are self-destructive even if they seem effective at the time and produce results that appear to benefit him. He's choosing a self destructive course, not just for him but for the nation.

There are many examples of this. He appears to make choices that are deceptive and manipulative of others, that demean others for his apparent benefit. These choices are coming out of pathology and ultimately destructive to him, also.

Tana Ganeva: Do you think he'll be re-elected?

I'm not an expert at that kind of thing. But one cannot underestimate the power of mental pathology to lure and deceive and to spread destruction. We have seen how his own attraction to conspiracy theories, how powerful is his ability to spin reality into something he wishes to perceive as real. If you collude in that or you're lured into that then anything is possible.

We've seen multiple nations go to their own peril and great destruction due to pathological leaders taking charge and leading entire nations to their destruction.

That's the power of mental pathology it can hypnotize you almost ... to do things in ways you would not otherwise do.

So, we've got a group of desperate refuge seekers hundreds of miles away ... he spins that into an invasion that's imminently threatening and that requires thousands of troops at the border, for example, to the point where people were ready to act on those beliefs.

Tana Ganeva: It seems that social media plays a role in a lot of these pathologies, from the President on down.

Social media absolutely has a role. What has happened is when you have conspiracy theories or fabricated news, it functions like a form of brainwashing. It's the way you control information that gets to certain people.

If you're isolating information from other sources of information.... social media creates a natural condition for brainwashing to occur. And we often talk about information bubbles. It seems more severe for those on the right than on the left, although I hear it happens on both sides. On the right it's far more extreme and far more divorced from reality. You have the very conditions that allow for thought reform to happen.