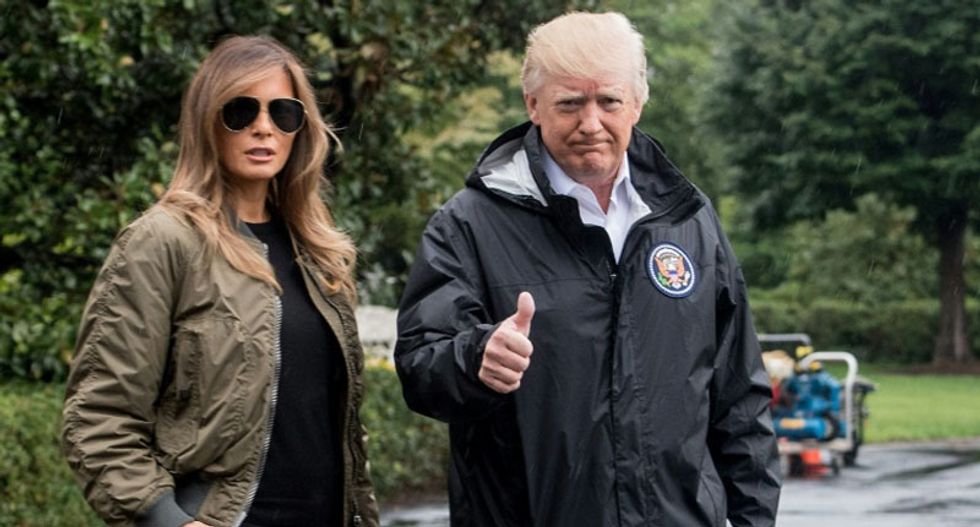 Experts in body movement and language and it's subtle revelations on the psychology of an individual have been watching the Trump family and have some hilarious observations.

Social News Daily collected commentaries about President Donald Trump and first lady Melania to gain some insight into their relationship behind the scenes.

Beltway rumors have been that the Trumps are on the rocks after it was revealed the president cheated on his wife when she was recovering from giving birth to their son. To make matters worse, Trump's series of mistresses revealed a great deal of humiliating information about him.

The first indication something wasn't working out were the infamous "hand swatting" incidents from early in the Trump term. It doesn't take an expert to know something was afoot.

“I’ve been doing body language [analysis] the last 20 years," wrote expert Traci Brown for Elite Daily. "I’ve never seen a situation where the president gets his hand swatted. He wants to have a connection when he wants to have a connection, and she is pretty clearly showing she’s tired of it. If you’re a real team, that kind of thing doesn’t really happen. There’s something going on behind the scenes that she would not want to do that.”

But fellow specialist Patti Wood noted that the president's decision to reach for his wife during the first hand-swat was purely political.

“[Trump] was seeing Macron with his wife, and how affectionate they are, and how happy she was, and even her making a little bit of an attempt to make sure she was holding hands with her husband," Wood concluded. "I believe Trump’s motivation in that moment, putting his fingers out to hold her hand, was so that he would look better.”

She also thinks Mrs. Trump isn't comfortable being in public with her husband or being such a big focus. While she might have once been a fashion model who was forced to appear before a crowd constantly, it isn't the same as being the first lady. Indeed, when Mrs. Trump isn't with her husband, like when she was doing her tour through Africa, she seemed far more relaxed. When she was at Barbara Bush's funeral and sitting next to former President Barack Obama, she laughed, smiled and seemed to have an excellent time away from the White House.

Another body language expert noted that if you didn't know the Trumps were married that they wouldn't seem like they even know each other.

“Trump and Melania do not have a warm relationship on or off-camera compared to their pre-politics era," said public image consultant Tonya Reiman. "The Trumps barely touch each other now compared to early videos. He will walk ahead of her, or push ahead to be first. When he sees another couple holding hands, then he’ll turn around to self correct.”

The president doesn't hold an umbrella over his wife, he walks in front of her, he doesn't check on her as she's descending the stairs -- nothing.

Wood also noted that the first dance the Trumps shared at the inaugural ball was clearly a joyful moment for the president, but that happiness didn't seem to be matched by his spouse.

The most telling, however, is Melania's missing smile. It's become a meme at this point in the presidency.

"We just can’t see any true smiles from her," Brown noted. "Look at her eyes! She’s there in body but not spirit…We see her giving it her best shot earlier in their relationship much more than what we see now.”

“She really did resist any expression of emotion during her husband’s speech," he said. "This tells me that she was exerting enormous restraint and taking back the power in her life. While she still seems uncomfortable in the spotlight, Melania is a fast student.”

Only time will tell for the stability of the couple, but at least one body language guru doesn't think the two are in for the long haul.

“I just cannot imagine that these two are going to stay married," Susan Constantine said. "They don’t have even the elementary foundation of couple love and compassion and physical-ness between them. There’s none of that, I don’t see it.”