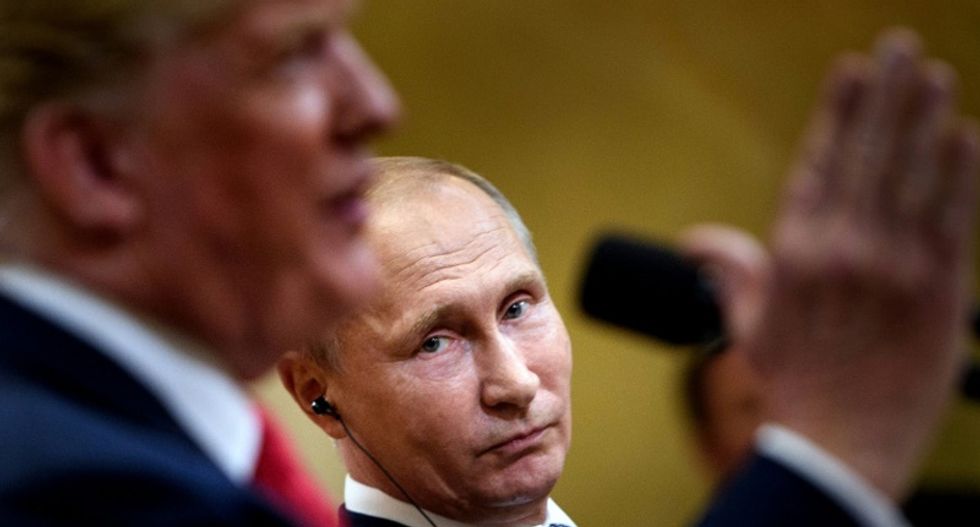 President Donald Trump's manner with Russian leader Vladimir Putin was in contrast to the anger he flashed at NATO allies. (AFP / Brendan Smialowski)

"The Russian influence campaign on social media in the 2016 election made an extraordinary effort to target African-Americans, used an array of tactics to try to suppress turnout among Democratic voters and unleashed a blizzard of posts on Instagram that rivaled or exceeded its Facebook operations, according to a report produced for the Senate Intelligence Committee," the Times reports.

Two reports have been prepared for the Senate Intelligence Committee.

One of the reports, by a company called New Knowledge, reveals the "most prolific I.R.A. efforts on Facebook and Instagram specifically targeted black American communities and appear to have been focused on developing black audiences and recruiting black Americans as assets."

In that same report, "researchers discovered many examples of the Russian operators building an audience with one theme and then shifting to another, often more provocative, set of messages. For instance, an Instagram account called @army_of_jesus_ first posted in January 2015 images from The Muppet Show, then shifted to The Simpsons and by early 2016 became Jesus-focused. Multiple memes associated Jesus with Mr. Trump’s campaign and Satan with Mrs. Clinton’s."

Russian trolls worked both to support Donald Trump and to attack Hillary Clinton.

"While the right-wing pages promoted Mr. Trump’s candidacy, the left-wing pages scorned Mrs. Clinton while promoting Senator Bernie Sanders of Vermont and Jill Stein, the Green Party candidate," the Times states. "The voter suppression effort was focused particularly on Sanders supporters and African-Americans, urging them to shun Mrs. Clinton in the general election and either vote for Ms. Stein or stay home."

Whether such efforts had a significant effect is difficult to judge. Black voter turnout declined in 2016 for the first time in 20 years in a presidential election, but it is impossible to determine whether that was the result of the Russian campaign.

The paper describes it as "the Russian effort to sway American opinion and divide the country, which the authors said continues to this day."