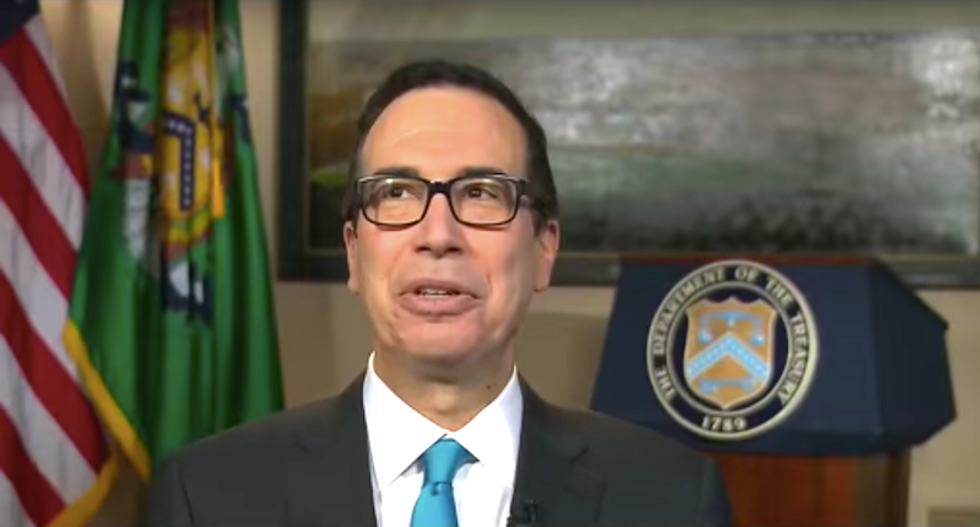 The S&P 500 tumbled to the brink of a bear market on Monday as U.S. stocks extended their steep sell-off in a pre-holiday shortened session, with investors rattled by the U.S. Treasury secretary’s convening of a crisis group and by other political developments.

All three major indexes ended down more than 2 percent the day before the Christmas holiday. The S&P 500 finished about 19.8 percent below its Sept. 20 closing high, just shy of the 20 percent threshold commonly used to define a bear market.

Treasury Secretary Steven Mnuchin called top U.S. bankers on Sunday amid the pullback in stocks and said he was calling a meeting of financial regulators to discuss ways to ensure “normal market operations.”

Investors also were grappling with the federal government shutdown and reports that President Donald Trump privately discussed the possibility of firing the Federal Reserve chairman.

“The headlines we are seeing today, yesterday, over the weekend are not great,” said Vinay Pande, global head of trading strategies at UBS Global Wealth Management.

“The market is concerned about what is happening in D.C.,” he said. “In the face of a large correction in the market, there seems to be disarray and disunity and people aren’t speaking with one voice, which I think is discouraging to anybody in the market.”

All 11 S&P 500 sectors finished down on the day on Monday, and all were in negative territory for the year. The index posted its lowest closing level since April 2017.

Roughly three-fourths of the S&P 500 was trading in bear market territory. All 30 components of the Dow industrials finished in the red on Monday.

For the third straight day, more than 2,600 New York Stock Exchange- and Nasdaq-listed stocks hit 52-week lows, reflecting a depth of selling not seen in the market since the height of the financial crisis a decade ago.

Mnuchin spoke on Sunday with the heads of the six largest U.S. banks, who confirmed they have enough liquidity to continue lending and that “the markets continue to function properly.”

But investors said his move to convene a call with the President’s Working Group on Financial Markets, known as the “Plunge Protection team,” may have weighed on sentiment on Monday.

“When the Dow is down 600 points, it’s hard to say it was a positive,” said J.J. Kinahan, chief market strategist at TD Ameritrade in Chicago. “Although his intention was a very good one, the net feeling I think was, ‘Is there a bigger problem that we don’t know about?”

Adding to jitters, Trump’s acting chief of staff, Mick Mulvaney, on Sunday said a partial U.S. government shutdown could continue to Jan. 3, when the new Congress convenes and Democrats take control of the House of Representatives.

The stock market closed at 1 p.m. EST (1800 GMT), ahead of Tuesday’s Christmas holiday.

About 5.9 billion shares changed hands in U.S. exchanges, compared with the 8.9 billion-share daily average over the last 20 sessions.

The CBOE Volatility Index .VIX, a widely followed options-based barometer of expected near-term volatility for stocks, finished up 5.96 points, at 36.07, its highest close since Feb. 5.

Declining issues outnumbered advancing ones on the NYSE by a 3.56-to-1 ratio; on Nasdaq, a 2.68-to-1 ratio favored decliners.