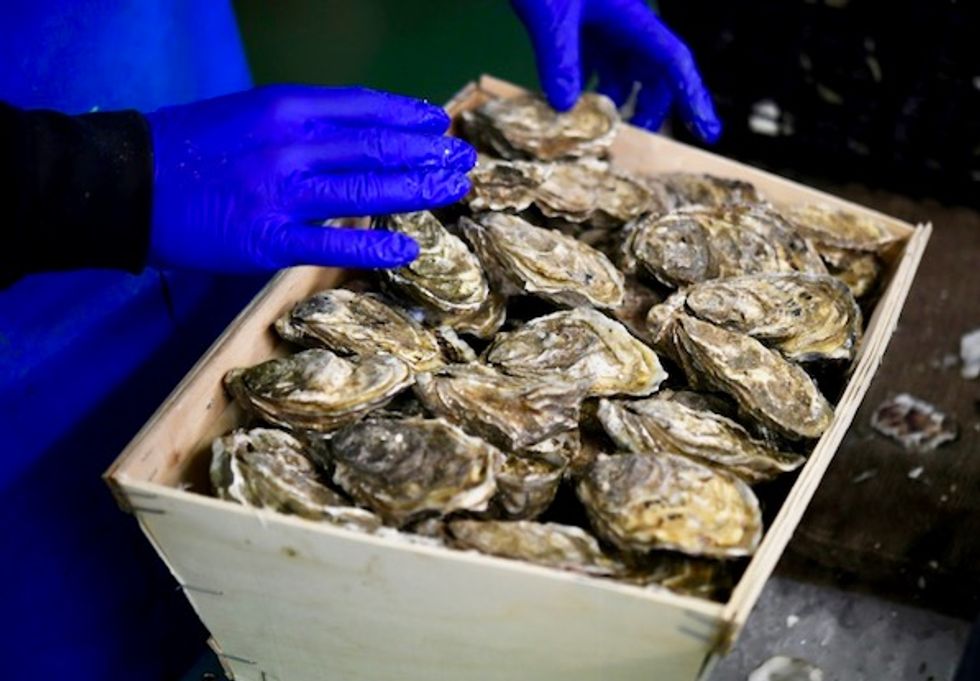 Gulping down oysters has long been a favourite New Year's Eve ritual for the French, but as winters get warmer and summers get drier many growers worry there will soon be fewer of the prized mollusks to go around.

"Twenty years ago, we'd be shivering in the warehouse while preparing the holiday orders. Today it's 15 degrees (60 Fahrenheit)," says Brittany oysterman Mathieu Le Moal, his sleeves rolled up in front of a tractor carrying dozens of bulging oyster sacks.

"We don't have seasons anymore -- but oysters need all four," Le Moal adds. "They need the winter, it's when they can rest, use less energy."

Inside a wooden hanger redolent of salt and the sea, around a dozen of his workers are sorting, weighing and packing oysters into crates in the Brittany port of Cancale.

Le Moal and other farmers along this stretch of France's Emerald Coast say the long drought which struck swathes of the country this summer took a heavy toll, leading to smaller harvests, and smaller shellfish.

Without summer rains that wash crucial minerals into the oyster beds, "there's no plankton, the main food for oysters, so they don't grow," explained fellow oysterman Bertrand Racinne, weaving his way between baskets and stacked crates.

"In the end, we have oysters but not enough of the big ones," said Racinne, who like most growers sells more than half his yearly production in December.

But this winter has so far been unusually warm and, paradoxically, too rainy.

Rains may bring minerals that favour plankton growth -- but they also mean the mollusks spend too much energy eating.

This year's harvest are likely to start the spring "fragile and vulnerable", warned Racinne.

"Ten grams fewer for each one, that makes a difference in sales," said Philippe Le Gal, president of the CNC national shellfish producers' association.

"Oyster farmers will see volumes down by 20 to 30 percent this year," Le Gal said. "Climate warming is starting to have an impact."

Warmer water temperatures are also a risk because they facilitate the spread of viruses that are especially harmful to oyster larvae, or spat, and young oysters.

Scientists point in particular to a Herpes virus, OsHV-1, that has been present in French oyster waters since 1991 but has become more aggressive recently, for reasons still unknown.

Since 2008, up to 75 percent of young oysters have been lost in some years, said Fabrice Pernet at the Ifremer ocean research institute in Brest.

"Oyster farmers had found a solution by putting ten times the amount of spat in the water in autumn, when the virus is not active," Pernet said.

But warmer waters would reduce this window of opportunity, he said, and new pathogens could arrive if carried north by fish and other sea life fleeing rising temperatures further south.

Not every oyster farmer is convinced, however, saying the bigger risks are pollution, oyster beds that are becoming too densely packed and the increased use of genetically modified species.

AFP/File / DAMIEN MEYERIf weather patterns become increasingly volatile, French farmers might have to start changing their growing seasons or move their beds north or further out to sea

"Mortality rates change every year, depending on the region... but nobody can really explain why," said Alexandre Prod'homme, another grower in Cancale.

But if warming and weather patterns become increasingly volatile, French farmers might have to start changing their growing seasons or move their beds north or further out to sea, Pernet said.

"Oysters aren't going to disappear... but they're probably going to have to migrate," he predicted.

For now, most growers say they're going to wait and see.

"We're not sure about anything regarding the impact of global warming, we're waiting for more scientific research," said Daniel Coirier, president of the shellfish association for the Poitou-Charentes region.

"But even if they're not as big, our oysters are still magnificent, and top quality!"