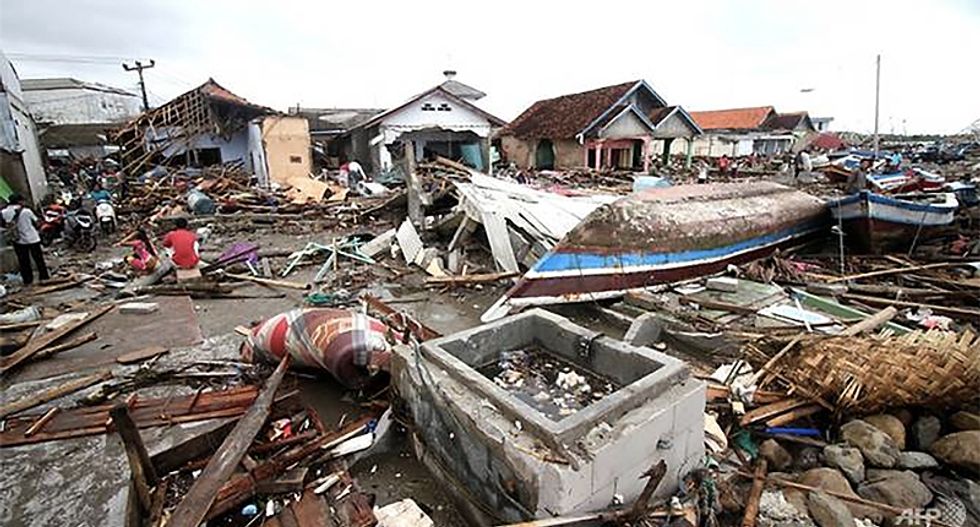 This general view shows destroyed or damaged homes in Sumur on Java island on Dec 24, 2018, two days after a tsunami - caused by activity at a volcano known as the "child" of Krakatoa - hit the west coast of Indonesia's Java island. (Photo: AFP / DEMY SANJAYA)

A small Christmas service was held near a stretch of Indonesia's tsunami-struck coastline Tuesday, as panicked residents in one coastal town tried to flee after rumours spread that another deadly wave was about to smash into the coast.

It turned out to be a false alarm, but widespread fears about a repeat disaster -- and warnings that clean water and medicine supplies were running low -- rippled across the region as the death toll from Saturday's volcano-triggered disaster topped 400.

Thousands more have been displaced, with many left homeless after houses were flattened by the killer wave.

"A lot of the children are sick with fevers, headaches and they haven't had enough water," said Rizal Alimin, a doctor working for NGO Aksi Cepat Tanggap, at a local school that was turned into a temporary shelter.

"We have less medicine than usual ... It's not healthy here for evacuees."

The powerful tsunami struck at night and without warning, sweeping over popular beaches on southern Sumatra and the western edge of Java and inundating tourist hotels and coastal settlements.

Indonesia is a Muslim majority nation but has a Christian minority, with services held Tuesday to celebrate Christmas -- and pray for those affected by the deadly tsunami.

Dozens attended a sombre service at the Rahmat Carita Pentecostal church near one of the worst-hit areas.

"This Christmas is different because we're celebrating it during a disaster," congregant Eliza told AFP.

"For me, it's a chance to contemplate."

Experts have warned that more deadly waves could slam the stricken region now covered by mountains of overturned cars, boats, furniture and other debris.

Many evacuees are too afraid to go home.

"I've been here three days," said Neng Sumarni, 40, who was sleeping with her three children and husband on the school's floor with some three dozen others.

"I'm scared because my home is right near the beach."

Authorities are using sniffer dogs to try to find any survivors and victims' bodies, while they have turned to drones to survey the devastated coastlines.

Abu Salim, with volunteer disaster aid group Tagana, said aid workers were scrambling to stabilise the situation by setting up public kitchens and tents for shelter.

"There are many evacuees who fled to higher ground and we still can't reach them."

In shattered Way Muli village on Sumatra, Udin Ahok was coming to grips with the horrible choice he was forced to make: save his wife or his mother and baby.

When the tsunami slammed into his house, the panicked Ahok fought to reach his sleeping 70-year-old mother and one-year-old son but then he saw his wife about to drown in the swirling waters. He plucked her to safety.

His mother and baby were found dead under mountains of debris.

"I didn't have time to save my mother and son," the weeping 46-year-old told AFP from a shelter in one of the stricken region's hardest-hit areas.

"I regret it so much. I can only hope they've been given a place in God's hands."

Across the Sunda Strait in Java island, Saki stood amid the rubble of what was once Sumber Jaya village and wondered aloud how he would get his life back on track.

"I can't rebuild, everything is gone -- my clothes, my money," said the 60-year-old, who like many Indonesians goes by one name.

Officials say the evidence suggested that an eruption of the rumbling Anak Krakatoa volcano, which sits in the middle of the Strait, caused a section of the crater to collapse and slide into the ocean, triggering the tsunami.

Anak Krakatoa is an island that emerged around 1928 in the crater left by Krakatoa, whose massive 1883 eruption killed at least 36,000 people.

Unlike those caused by earthquakes, which usually trigger alert systems, volcano-triggered tsunamis give authorities very little time to warn residents of the impending threat.

Indonesia's disaster agency initially said there was no tsunami threat at all, even as the killer wave crashed ashore.

It was later forced to issue a correction and an apology as it pointed to a lack of early warning systems for the high death toll.

"The lack of a tsunami early warning system caused a lot of victims because people did not have the time to evacuate," agency spokesman Sutopo Purwo Nugroho said Monday.

The Krakatoa Observatory, which is monitoring the crater, warned that volcanic activity was still high.

"There is still a strong chance of an eruption," said observatory official Kristianto.

The tsunami was Indonesia's third major natural disaster in six months, following a series of powerful earthquakes on the island of Lombok in July and August and a quake-tsunami in September that killed around 2,200 people in Palu on Sulawesi island, with thousands more missing and presumed dead.

It also came less than a week before the 14th anniversary of the 2004 Boxing Day tsunami, one of the deadliest disasters in history that killed some 220,000 people in countries around the Indian Ocean, including some 168,000 Indonesians.

The vast archipelago nation is one of the most disaster-hit nations on Earth due to its position straddling the so-called Pacific Ring of Fire, where tectonic plates collide.