What your favorite Christmas movies say about social justice 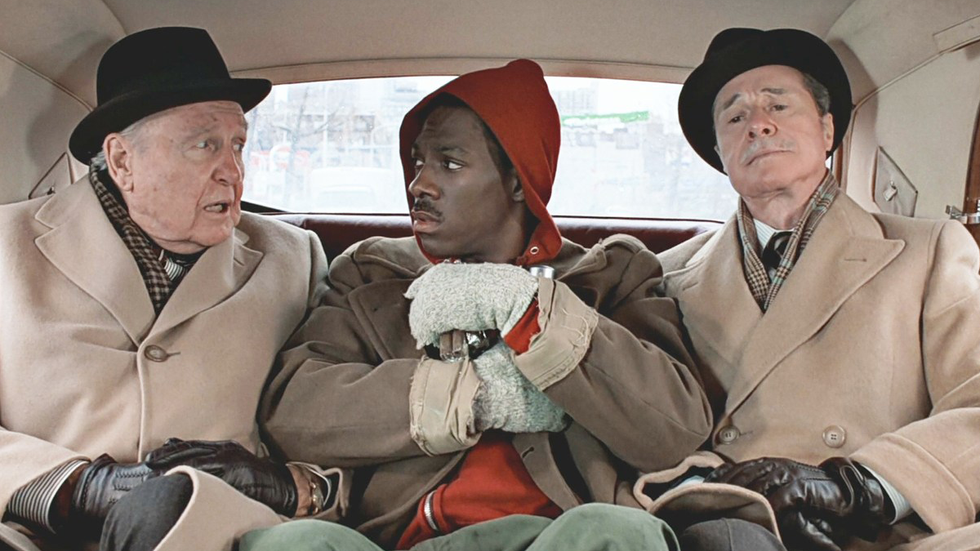 Christmas movies, from It’s a Wonderful Life to Die Hard, mostly deliver the same clove-scented bromide: Sure, capitalism is destructive sometimes, but singular acts of charity spurred by the supernatural can save us! Maybe this message makes you feel cozy. But this year, aren’t you hungry for more than just cozy? For you, the hungry, I offer this social justice nerd’s tour of the good, the bad, and the ugly in Christmas cinema.

This film is a firm 1980s rebuke to the demonization of Black culture. It gets ugly when Dan Aykroyd dons blackface and a Jamaican accent for some reason, but its historical take on racism is still good.

Aykroyd’s character, Louis Winthorpe III, belongs to the Founders Club (along with the film’s villains), founded at the birth of the nation, 1776. The walls are adorned with portraits of presidents. The membership: 100 percent White. The staff: 100 percent Black. Racism is the landscape of the movie. It’s not located in individual bigots, as in Hollywood’s other supposedly brave anti-racist flicks (see Crash, Detroit, Three Billboards Outside Ebbing, Missouri), but rather in the founding of the country and in its institutions.

It’s a shame then that the resolution stays stuck in the system as Winthorpe and Eddie Murphy’s character only win by manipulating the stock exchange. So they join the system to beat the system, and then they perpetuate it. Using their winnings on a lavish vacation to a distant tropical beach, they take American wealth inequality to international waters. But this vacation is also a utopian vision—former servants, woman, man, White, and Black living together in paradise.

It’s the story of Clark Griswold, an “excellent choice to be named Food Additive Designer of the Year” for his “non-nutritive cereal varnish.” “The last true family man” just made the down payment on a pool he can’t afford without his expected Christmas bonus.

It’s clear that the film asks us to laugh at Clark’s idea of Christmas, not with it. And then there’s poor cousin Eddie. Clark loathes him, even though he’s literally handicapped by a brain injury. But after every joke at Eddie’s expense, Clark is shown to be the true fool. But Clark shows sympathy for Eddie’s children. Late one sleepless night, Eddie’s youngest asks Clark, “If Santa is real, how come we didn’t get squat last year? We didn’t do nothing wrong.” Clark tells her not to worry this year, because he knows for a fact that Santa is real. In reassuring her of the Santa myth (be good and you’ll get presents), Clark reassures himself of his adult capitalist myth (work hard, be good, and you’ll get your bonus).

But it is all a lie. His boss cancels all bonuses. Facing financial ruin, Clark is saved by none other than Eddie, who kidnaps the boss, and in the end he restores bonuses. It’s Eddie’s protest (not being good), sparked by familial love (not self-serving labor), that wins the day.

The story of George Bailey deciding to live because an angel tells him he’s a hero is either a thought experiment on the butterfly effect or it’s just another Hollywood White Man Savior picture. Sure, it’s touching when the community bands together to save Bailey’s Building and Loan. (I cry. Every. Time.) But it also revises history, erasing the federal government’s outsize part in expanding housing after the Great Depression.

Writing for Naked Capitalism, professor of humanities Scott Ferguson paints the problem like this: “As thousands turn to crowdfunding platforms to shore up neoliberalism’s structural failures in everything from health care to the arts, It’s a Wonderful Life’s improbable fable of community-funded uplift stokes contemporary desires for digitally mediated miracles,” e.g., Facebook fundraising to cover a late mortgage payment. It’s workable on a personal level if you have friends with means, but it’s no fix for a broken housing system.

Santa—real Santa—works at the department store. Of course, he didn’t mean to get the job; he was just minding his own business at a parade when he got discovered for a modeling gig, and one thing led to another.

At first, it seems like real Santa makes a bad fake Santa. When parents complain that he’s promising their kids expensive gifts (what did they expect?), he tells them where they can get a better deal. The store’s managers don’t approve until they realize that Santa’s altruism is good marketing. Somehow, in the Miracle universe, no one else has thought of this yet.

Later, after assaulting a man on the street, Santa gets dragged into court and forced to prove he’s the real Santa (how this clears him of assault, no idea). It’s a little disappointing that the prosecution doesn’t ask why poor kids tend to get fewer and lower-quality toys (“Santa, in your estimation, are poorer children less nice?”) The prosecution’s slam dunk case is routed by a one-dollar bill handed to the judge. The “reasoning” goes: The nation was founded on God, believing in God is like believing in Santa, and the judge definitely believes in the money printed with “In God We Trust” on the back, so he believes in Santa. Hooray?

There is power in the warm message of this pre-MeToo British rom-com: The world isn’t all bad. “Love, actually, is all around,” and you need only observe an airport arrivals gate to bear witness. However, they deliver this line right at the start, so you can stop there and skip three stories of boss men hooking up with their women employees. Bonus: You also get to skip the relentless workplace fat-shaming of a woman who is barely not-thin.

At just 15 years old, this comedy has not aged well. A lot of the jokes are all constructed from a short list of 2003-approved slurs plus being mean to children.

Billy Bob Thornton’s revolting grinch character doesn’t have his first morally redeeming moment until halfway into the movie, and his backstory comes even later. If we hate him for being depressed and self-destructive, where’s our Christmas spirit?

The film is agnostic when it comes to cracking shopping mall safes on Christmas Eve. Knocking some accumulated wealth out of the system once a year, it turns out, provides enough to live comfortably, and if done well it doesn’t hurt anyone. And that’s how the movie gets us to like Thornton’s character. He’s good at what he does, which is nonviolently stealing lots of money from faceless corporations. He’s like a suicidally depressed Robin Hood.

Welcome to the mind of Tom Hanks. He voices Hero Boy, Hero Boy’s dad, the dadlike train conductor, the bad dadlike hobo, and, the daddy of all dads, Santa. This movie is the id of old liberal dads. Along a ride of nightmare logic that propels a series of nonsensical conflicts, we’re fed bits of cryptic wisdom meant to guide kiddos toward being good, fully formed adults. In addressing Christmas contradictions—poor kids are treated poorly by Santa, “doesn’t this holiday promote wasteful consumption?”—we’re given the old liberal answer of annual charity. Inside the Leviathan of Christmas, the kiddos get lost in a tangle of deadly machinery built by a capitalist cult of CEO-worshipping elves (“Time is money,” they say). The film tries to make us feel good about this house of horror and its contradictions, but I just can’t. What’s good is the ending. Each kid gets a personal moral. To Hero Girl, who is Black, “Lead,” because you show some aptitude for leadership. To Know-It-All, a White kid, “Learn” because you might be tempted to use your confidence and disdain to shoot down the ideas of Hero Girl, but you really don’t know everything. And to Hero Boy, “Believe,” because letting someone else lead might be hard for a hero boy, but you gotta keep the faith.

At first, the villain of the movie seems to be a town scrooge, or maybe it’s the jingoist neighbor. Red herrings, both. This movie puts up an all-star villain team of the profit motive, colonialism, and technocrats. On a journey to Chinatown, a White American inventor exploits a generational culture divide (the old shopkeeper turns him away, but his grandson says they need the money) to steal a Chinese wonder, a cute creature known as the mogwai. At first, the inventor just wants a gift for his kid, but seeing how easily they multiply (just add water!), he tries to name the creature after himself (as if he’d discovered them) and he dreams of replacing the family dog (but “the Peltzer pet” isn’t nearly as endearing as “Gizmo”). His sweet, dopey dad vibe almost masks the dollar bill eyeballs. But one turns into five and five into a horde, sabotaging the city and hurling our toys at us with deadly force. It’s tempting to interpret the gremlins as a foreign invasion, but they are homegrown, spawned by our greed and our unwillingness to respect rules. So how do you stop a horde of capitalist monsters? Cast light on the nexus of consumption and colonialism, the shopping center (light literally kills gremlins).

In the end, the Chinese shopkeeper takes back his original mogwai and says America just isn’t ready. We may have survived this catastrophe, but we need a whole culture shift if we’re to prevent the next.