Fox & Friends falls all over itself defending Trump payments to mistresses: 'Obama did the exact same thing' 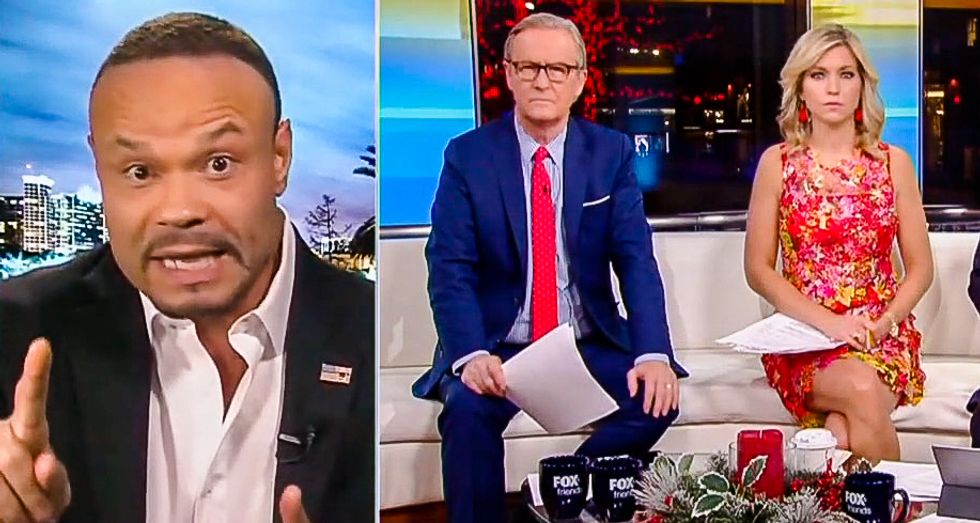 A Fox & Friends segment on Monday insisted that President Donald Trump does not deserve jail time for illegally paying off two women during the 2016 campaign because former President Barack Obama "did the exact same thing."

During a segment about Trump's payments to two former mistresses during the 2016 campaign, conservative commentator Dan Bongino complained that federal prosecutors would be wrong to "throw the president in jail" for violating campaign finance laws.

"Explain to me how this isn't police state tactics," Bongino told the hosts of Fox & Friends. "For what? For civil violations?"

Fox News host Brian Kilmeade complained that federal prosecutors are "putting all these adjectives" in court filings to make a case against Trump.

"Let's drill down on it," Kilmeade continued. "There were two women coming forward that were going to say negative things about the president and relations. If you are running for office, whether it's a bad business deal where you have a bitter partner, you want to make sure things are going the best you can to keep your eye on the ball."

The Fox News host acknowledged that former Trump attorney Michael Cohen had paid Karen McDougal and Stormy Daniels over $100,000 each to secure their silence.

"That's an election law violation," Kilmeade explained. "According to everybody's stats, Barack Obama's campaign spent nearly $2 million in violations of election law. They got a fine of $300,000. But you want to throw this president in jail about payments to women that they may or may not have known about!"

"What you just said is factually correct," Bongino replied. "The Barack Obama team was guilty of the exact same thing and was given a civil fine... But because its Barack Obama -- you know, the annointed one -- nothing happened."

There is no evidence that Obama or his campaign team paid hush money to women during his 2008 or 2012 campaigns.