GOP had 11 chances to stop Trump before the current funding fiasco – but failed to: conservative columnist 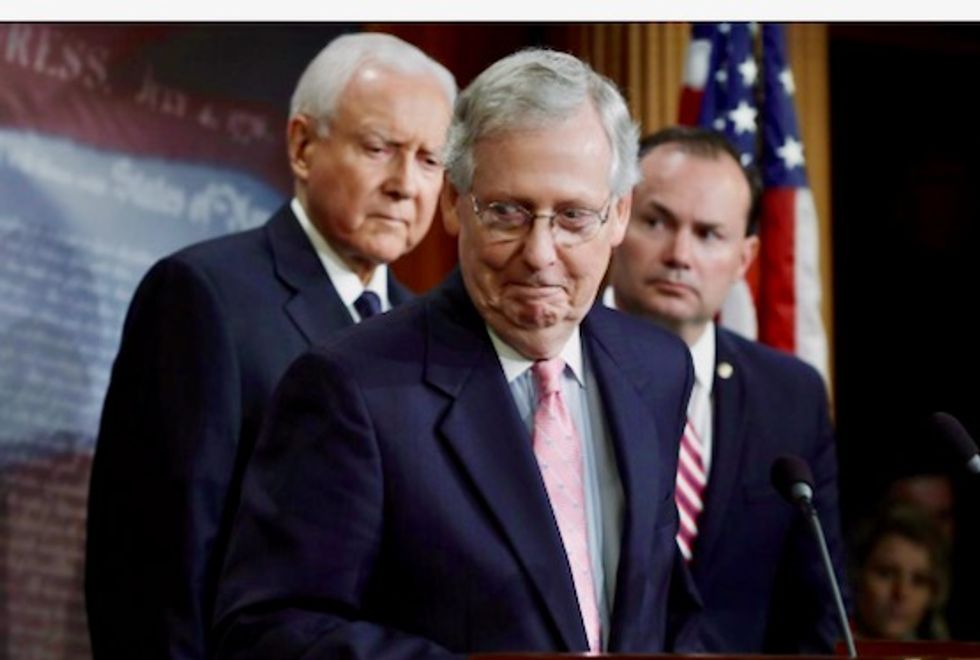 A government shutdown appeared inevitable Friday, as President Donald Trump doubled down on his pledge to allow the workings of government to grind to a halt.

The chances of a shut down are "probably very good" the President confirmed in a press briefing Friday morning.

Conservative columnist Jennifer Rubin writes in the Washington Post that even with all of the chaos issuing from the White House, Republicans refuse to take any number of actions that might rein in the President. And there's a lot they could have done over the last two years.

"Republicans are responsible for the Trump fiasco," Rubin says.

"We have gotten to this sorry stage of events because Republican lawmakers shielded him from scrutiny and indulged his lies, racist rhetoric and attacks on democratic norms. To make matters worse, Republican senators refused to reject unqualified or extreme nominees," she adds.

Here are 11 ways the GOP could have stopped Trump, according to Rubin, but opted not to.

1. They could have taken concrete action by blocking his nominees until the completion of Special Counsel Robert Mueller's probe. But they didn't.

"Not a single Republican senator has committed to delaying confirmation of key Cabinet nominees until the special counsel’s report is complete," Rubin writes.

2. Then there are his mysterious tax records, an issue from campaign season that's never been resolved. "Not a single Republican lawmaker has committed to bipartisan legislation forcing Trump to turn over his tax records and divest himself of his businesses."

3. None have called for his resignation or even seemed especially opposed to a second term.

"Not a single Republican member of Congress has declined to endorse him for reelection. (Do they actually think he deserves reelection, or is even fit to govern?)," she writes.

"And certainly none has called for him to resign for, if nothing else, his endemic lying and effort to defraud voters during the 2016 election (e.g., lying about pursuit of business deals with a foreign foe, hiding payments to women)."

4. There's the President's failure on the national disaster front. "Not a single Republican chairman has conducted an oversight hearing on the handling of Hurricane Maria,' she writes.

5. The conflicts of interest that continue to bedevil the administration, such as: "Commerce Secretary Wilbur Ross’s serial failures to disclose and divest himself of stocks posing a conflict of interest."

6. And: "administration officials' repeated misuse of taxpayer money on travel."

7. And: "Jared Kushner’s and Ivanka Trump’s possible conflicts of interest."

9. And: "Mar-a-Lago members' influence at the Department of Veterans Affairs."

10. And: "Trump’s receipt of foreign emoluments."

11. And: "White House procedures for national security clearances or dozens of other incidents involving mismanagement or corruption."

It's an overwhelming list of misdeeds, any one one of which might be cause for long-standing controversy in previous administrations. Yet, thanks in part to GOP inaction, the news cycle seems to lurch on without much constraint being put on the president by members of his own party.