‘His leverage is going down -- not up’: GOP consultant admits Trump is losing his shutdown fight 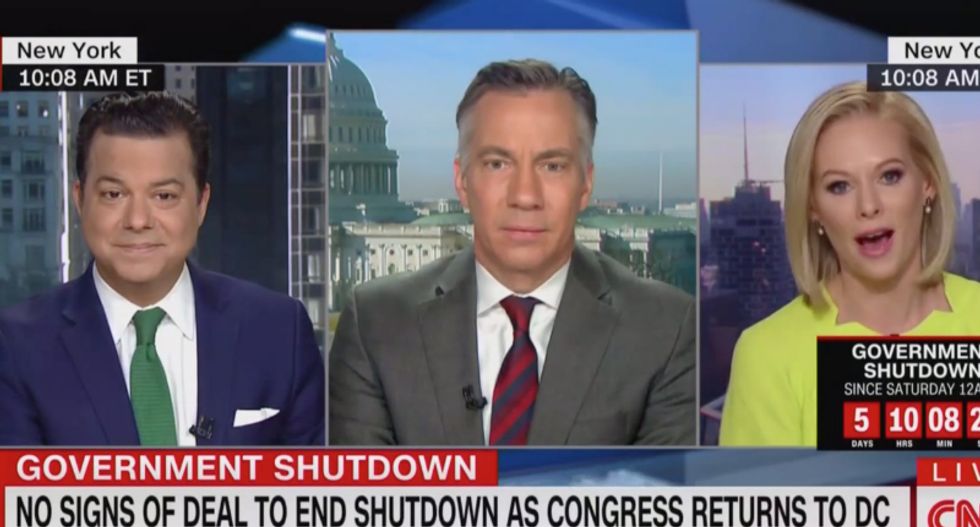 Republican consultant Margaret Hoover told CNN on Thursday that President Donald Trump was losing leverage on a daily basis in his shutdown battle, and would inevitably lose.

"What you're witnessing clearly isn't the art of the deal here, folks," cracked Hoover's husband, CNN senior political analyst John Avlon, who said "if we were playing like adults interested in solving problems", the president would end his shutdown and "do a Nixon in China" on bipartisan immigration reform. "There's just absolutely nothing in our experience that he would ever take the bait to actually act like a real leader in this regard."

Hoover said that Trump might be in a "win-win position with his most ardent supporters", but that everyone else loses.

"America loses, the DACA kids lose, the Democrats lose," she said. "Look, his leverage is going down, not up. Every day this goes on, it's a day closer that Nancy Pelosi takes the gavel in the House of Representatives." But Hoover also tried to spread the blame equally, and in doing so dropped an ugly anti-immigrant statement.

"We know Trump is intransigent and won't move. Democrats are also pretty intransigent and want to win this," she continued, saying the president left a leadership vacuum. "There's a void to be filled, and wouldn't it be nice to finally see Democrats not be politicizing immigration and actually get something done for Americans who need the help. For kids who have lived here."