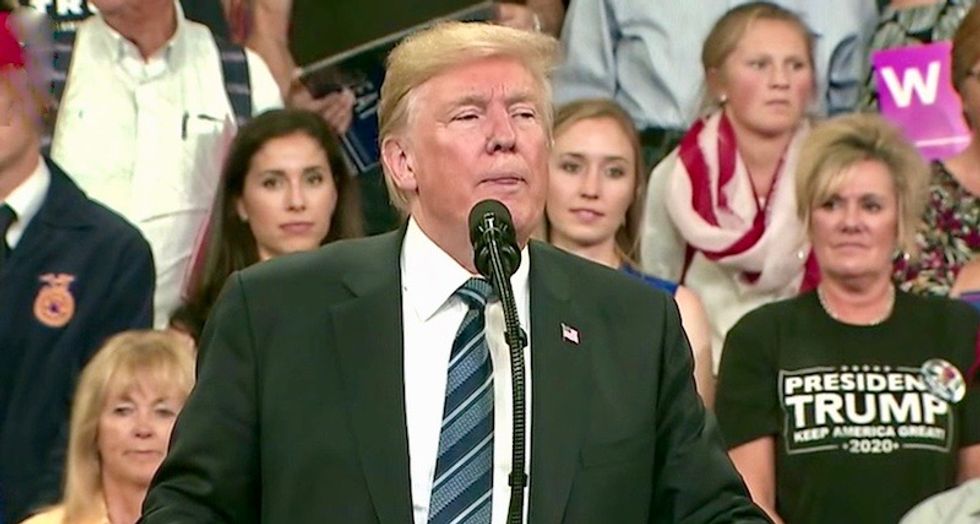 Donald Trump compares himself to Lincoln while speaking in Billings, Montana/Screenshot

On today's Face the Nation, Representative Adam Schiff claims that President Trump may face the real prospect of jail time after leaving office. This amid the Cohen and Manafort filings from last week.

"My takeaway is there's a very real prospect that on the day Donald Trump leaves office the justice department may indict him," said Schiff. "That he may be the first president in quite some time to face the real prospect of jail time."

Schiff added, "We have been discussing the issue of pardons that the president may offer to people or dangle in front of people. The bigger pardon question may come down the road as the next president has to determine whether to pardon Donald Trump… The idea that while people are out walking precincts and doing what they should do in campaigns, the rich and powerful seem to live by a different set of rules."

"So, this was the argument for putting Michael Cohen in jail on these campaign violations. That argument I think was equally made with respect to Individual-1, the president of the United States," Schiff concluded.

A memo under the Starr investigation into President Clinton, revealed by the New York Times in July, takes this further, saying that a sitting president is not above the law and could be indicted while in office. It remains to be seen if such a possibility exists in this case.

Nevertheless, whether the President is in office or out of it, it is sounding much more likely that "Individual-1" may face the prospect of an indictment into criminal acts.

Schiff is most likely going to be the chairman of the House Intelligence Committee once the Democrats over the house in January.

Watch the discussion below.