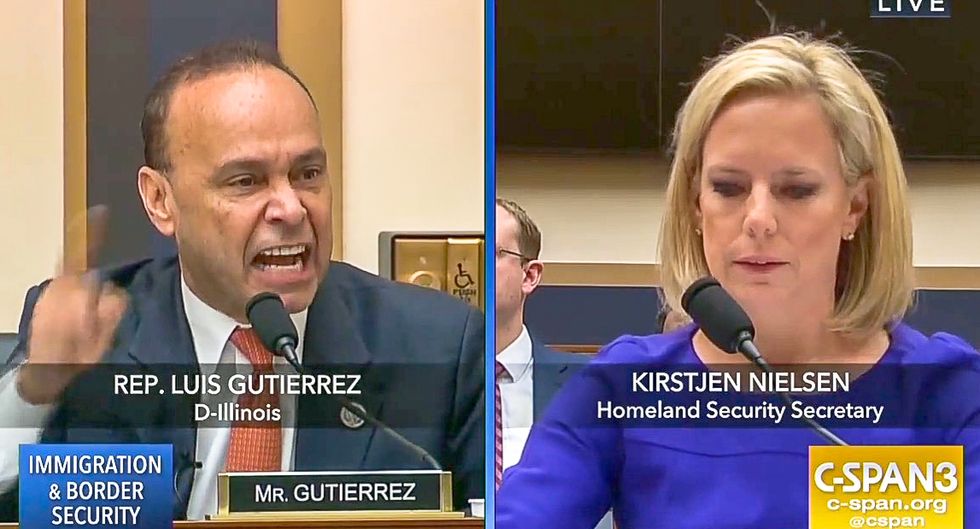 Rep. Luis Gutierrez (D-IL) on Thursday told Department of Homeland Security Secretary Kirstjen Nielsen that Jesus Christ would have "perished" if President Donald Trump's border policies had been in place when the Christian savior was fleeing persecution.

At a House Judiciary Committee hearing, Gutierrez suggested to Nielsen that the Trump administration practice of separating families would have resulted in the death of Christ.

"You came here today to tell us it is exactly your policy of separating children from their families," Gutierrez charged. "It is repugnant to me and astonishing to me that during Christmas... a time in which we celebrate the birth of Jesus Christ -- a Jesus Christ who had to flee for his life with Mary and Joseph."

"Thank God there wasn't a wall that stopped him from seeking refuge in Egypt," the congressman continued. "And thank God there wasn't an administration like this or he would have perished on the 28th, on the Day of Innocence when [King] Herrod ordered the murder of every child under 2 years of age."

"Shame on everybody that separates children and allows them to stay at the other side of the border fearing death, fearing hunger, fearing sickness!" Gutierrez added. "Shame on us for wearing our badge of Christianity during Christmas and allow the secretary to come here and lie!"

"And for my colleague to the left, if Mary and Joseph were trying to come into the United States under the situation that existed and King Herod was trying to kill everybody under 2, wouldn't they be eligible for asylum in the United States?" Gohmert asked Nielsen.

"Yeah, so he can scratch that from his concerns," Gohmert quipped.

Watch the videos below from C-SPAN.