NASA probe finds signs of water on nearby asteroid Bennu 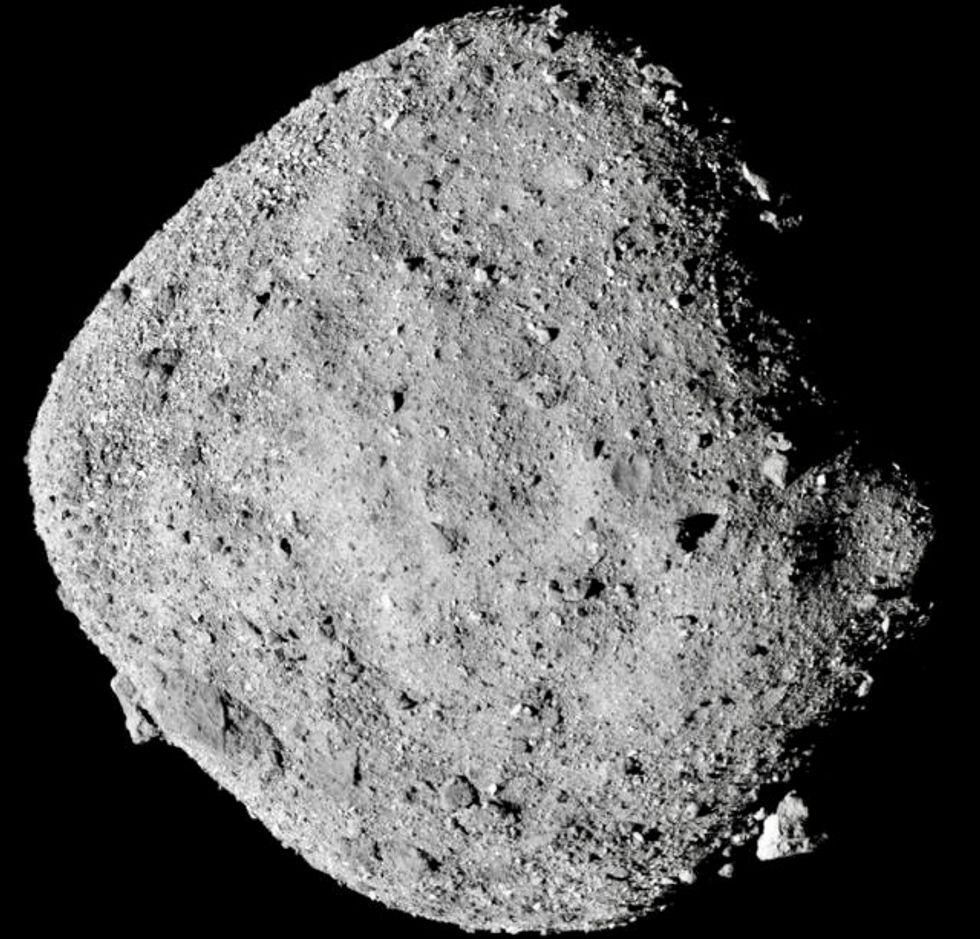 This mosaic image of asteroid Bennu, composed of 12 PolyCam images collected on December 2, 2018 by the OSIRIS-REx spacecraft from a range of 15 miles (24 km). NASA/Goddard/University of Arizona/Handout via REUTERS

NASA’s OSIRIS-REx spacecraft has discovered ingredients for water on a relatively nearby skyscraper-sized asteroid, a rocky acorn-shaped object that may hold clues to the origins of life on Earth, scientists said on Monday.

OSIRIS-REx, which flew last week within a scant 12 miles (19 km) of the asteroid Bennu some 1.4 million miles (2.25 million km) from Earth, found traces of hydrogen and oxygen molecules - part of the recipe for water and thus the potential for life - embedded in the asteroid’s rocky surface.

The probe, on a mission to return samples from the asteroid to Earth for study, was launched in 2016. Bennu, roughly a third of a mile wide (500 meters), orbits the sun at roughly the same distance as Earth. There is concern among scientists about the possibility of Bennu impacting Earth late in the 22nd century.

“We have found the water-rich minerals from the early solar system, which is exactly the kind of sample we were going out there to find and ultimately bring back to Earth,” University of Arizona planetary scientist Dante Lauretta, the OSIRIS-REx mission’s principal investigator, said in a telephone interview.

Asteroids are among the leftover debris from the solar system’s formation some 4.5 billion years ago. Scientists believe asteroids and comets crashing into early Earth may have delivered organic compounds and water that seeded the planet for life, and atomic-level analysis of samples from Bennu could provide key evidence to support that hypothesis.

“When samples of this material are returned by the mission to Earth in 2023, scientists will receive a treasure trove of new information about the history and evolution of our solar system,” Amy Simon, a scientist at NASA’s Goddard Space Flight Center in Maryland, said in a statement.

“We’re really trying to understand the role that these carbon-rich asteroids played in delivering water to the early Earth and making it habitable,” Lauretta added.

OSIRIS-REx will pass later this month just 1.2 miles (1.9 km) from Bennu, entering the asteroid’s gravitational pull and analyzing its terrain. From there, the spacecraft will begin to gradually tighten its orbit around the asteroid, spiraling to within just 6 feet (2 meters) of its surface so its robot arm can snatch a sample of Bennu by July 2020.

The spacecraft will later fly back to Earth, jettisoning a capsule bearing the asteroid specimen for a parachute descent in the Utah desert in September 2023.

Reporting by Joey Roulette; Editing by Will Dunham