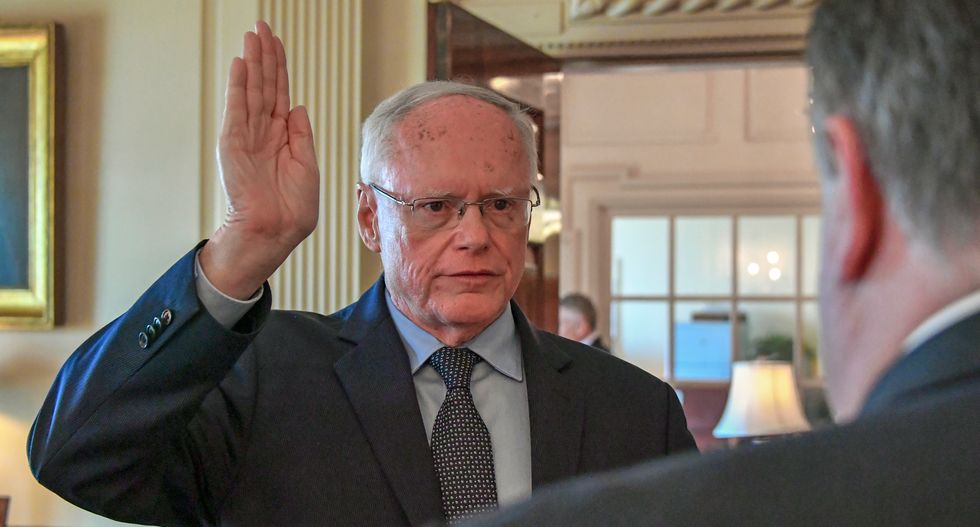 In August, a book was published titled Everything Trump Touches Dies. Written by conservative strategist Rick Wilson, the book detailed Donald Trump's habit of harming everything in his proximity.

The story of Ambassador James Jeffrey be the latest example of the reputational costs of supporting Trump, according to a Thursday evening Politico story.

Jeffrey had been a high-profile Republican who signed an August 2016 letter denouncing Trump.

"From a foreign policy perspective, Donald Trump is not qualified to be president and commander-in-chief," the open letter read. "Indeed, we are convinced that he would be a dangerous president and would put at risk our country's national security and well-being."

"He weakens U.S. moral authority as the leader of the free world," they wrote. "He appears to lack basic knowledge about and belief in the U.S. Constitution, U.S. laws and U.S. institutions, including religious tolerance, freedom of the press and an independent judiciary."

"Unlike previous presidents who had limited experience in foreign affairs, Mr. Trump has shown no interest in educating himself. He continues to display an alarming ignorance of basic facts of contemporary international politics. Despite his lack of knowledge, Mr. Trump claims that he understands foreign affairs and 'knows more about ISIS than the generals do,'" they added.

Despite vowing not to vote for Trump, Jeffrey joined the administration as Special Representative for Syria Engagement.

“How can he put his name and reputation behind this policy?” a foreign policy expert asked Politico. “The president undermined everything he had been working on.”

“The way this was done is going to make Jim Jeffrey’s job harder because foreign governments and foreign officials are going to wonder whether he genuinely represents the president of the United States,” said former Ambassador Robert Ford.

“Jim came into the administration on the understanding that it would remain deeply and aggressively engaged in Syria and that Trump wouldn’t change his mind,” former senior Obama aide Rob Malley explained. “Jim will have to decide whether what remains of the [Syria] policy makes sense to him, and whether he wants to be the person overseeing it.”

Jeffrey has not commented publicly since Trump's Twitter announcement.

We have defeated ISIS in Syria, my only reason for being there during the Trump Presidency.
— Donald J. Trump (@Donald J. Trump)1545229789.0