Nina Turner shreds Santorum after he defends not paying government workers: 'We are in a Hunger Games moment' 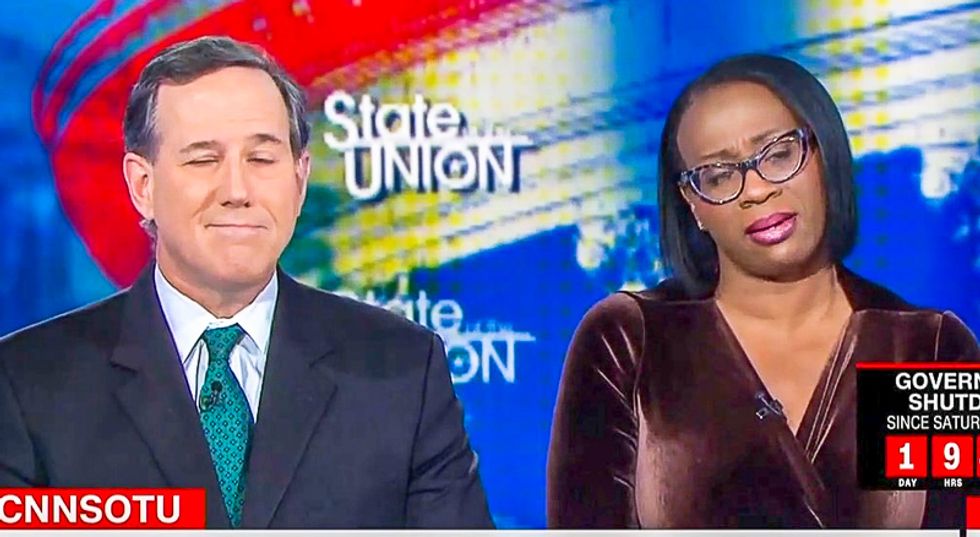 Republican strategist Rick Santorum argued on Sunday that President Donald Trump was "right" to shut down the government over funding for his border wall.

"The president is right in taking this on," Santorum told CNN's Jack Tapper. "Even saying, 'It's on me,' because he's focused the debate exactly where he wants to focus it. This is an issue that's a winning issue for Republicans."

"The fact that we're shutting down the government is going to be blamed on the person asking for the money," the former GOP senator continued. "So you might as well own it. The president has owned it. I think that's a good thing. And now we're talking about a very good subject, which is actually good for Republicans."

"[President Trump is] not really owning it," Turner explained. "I mean, he had this public display with Leader Pelosi and Sen. Schumer to say, 'I'll shut it down, I'll take the blame,' and then he reversed course."

Turner reminded Tapper of a quote from The Hunger Games: "Destroying things is much easier than making them."

"We are really in a Hunger Games moment right here," she said. "And it's always that kind of moment when it comes to the president of the United States. He says one thing and does another. Or he'll do something and say another. It is total chaos. This is not helpful for the country at all."

Turner went on to point out that the far-right Freedom Caucus was invited to have lunch with Trump before the government shutdown began.