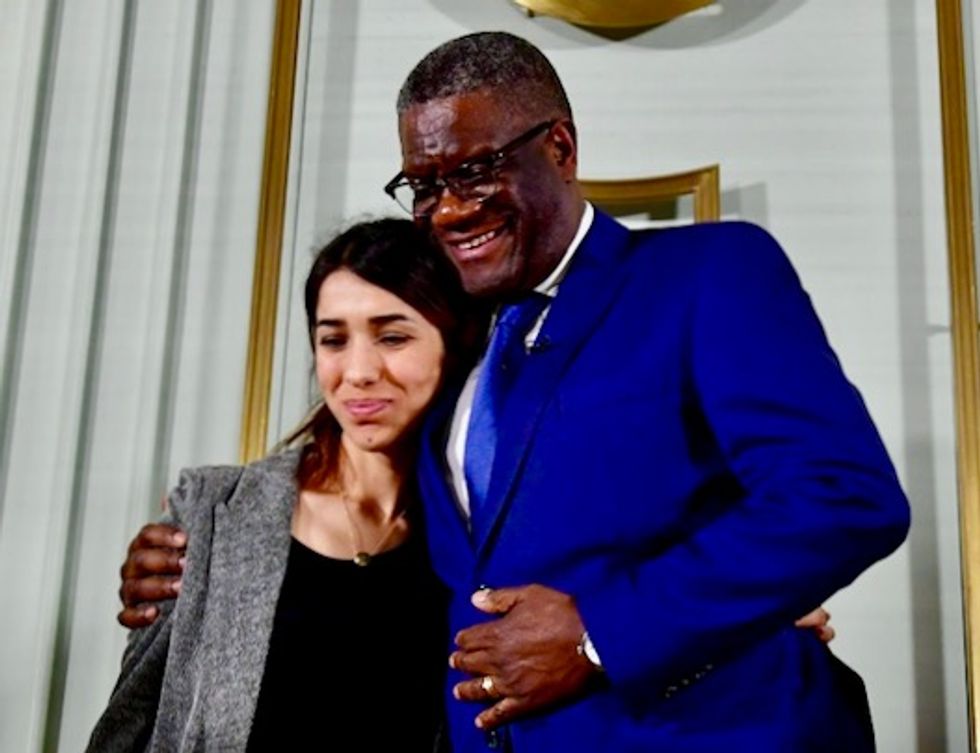 Congolese doctor Denis Mukwege and Yazidi activist Nadia Murad, an IS sex slave survivor, will be presented with the Nobel Peace Prize Monday, as they challenge the world to combat rape as a weapon of war.

Mukwege, dubbed "Doctor Miracle" for his work helping victims of sexual violence, and Murad, who has turned her experience into powerful advocacy for her Yazidi people, will receive the prize at a ceremony in Oslo.

The Norwegian Nobel Committee in October said the prize was for "for their efforts to end the use of sexual violence as a weapon of war and armed conflict".

The laureates, who have dedicated their award to rape victims across the world, have said they hope the Nobel will raise awareness of sexual violence and make it harder for the world to ignore it.

"We cannot say that we didn't act because we didn't know. Now everyone knows. And I think now the international community has a responsibility to act," Mukwege told reporters at a news conference on Sunday.

The surgeon has spent 20 years treating the wounds and emotional trauma inflicted on women in the DR Congo's war-torn east.

"What we see during armed conflicts is that women's bodies become battlefields and this cannot be acceptable," he said.

Fellow laureate Murad has become a tireless campaigner for the rights of Yazidis since surviving the horrors of captivity under the Islamic State group in Iraq and Syria where they targeted her Kurdish-speaking community.

Captured in 2014, she suffered forced marriage, beatings and gang-rape before she was able to escape.

She said the Nobel was "a sign" for the thousands of women still held by jihadists.

"This prize, one prize cannot remove all the violence and all the attacks on pregnant women, on children, on women and give them justice," Murad said on Sunday.

But she said she hoped it would "open doors so that we can approach more governments", to bring the perpetrators to court and "so that we can find a solution and actually stop what is happening".

- Act or 'injustice will continue' -

The co-laureates have come to represent the struggle against a global scourge that goes well beyond any single conflict.

"Each of them in their own way has helped to give greater visibility to war-time sexual violence, so that the perpetrators can be held accountable for their actions," said Nobel committee chairwoman Berit Reiss-Andersen, when the award was announced in October.

Mukwege has treated tens of thousands of victims -- women, children and even babies just a few months old -- at Panzi hospital which he founded in 1999 in DR Congo's South Kivu.

Murad, now UN ambassador for victims of human trafficking, was among thousands of Yazidi women and girls who were abducted, raped and brutalised by jihadists during their assault in 2014.

Older women and men faced summary execution during the IS assault, which the United Nations has described as a possible genocide. Murad's mother and six of her brothers were killed.

A UN team authorised to investigate the massacre of the Yazidi minority is due to finally start fieldwork in Iraq next year.

Murad said "steps towards justice" had given her hope.

But she stressed that "not a single ISIS terrorist" has appeared in court, adding "this injustice will continue in this world if it is not dealt with now".

The Nobel Peace Prize -- a gold medal, diploma and nine million Swedish Krona (880,000 euros, $1 million) -- will be officially presented in a ceremony at Oslo City Hall at 1200 GMT.