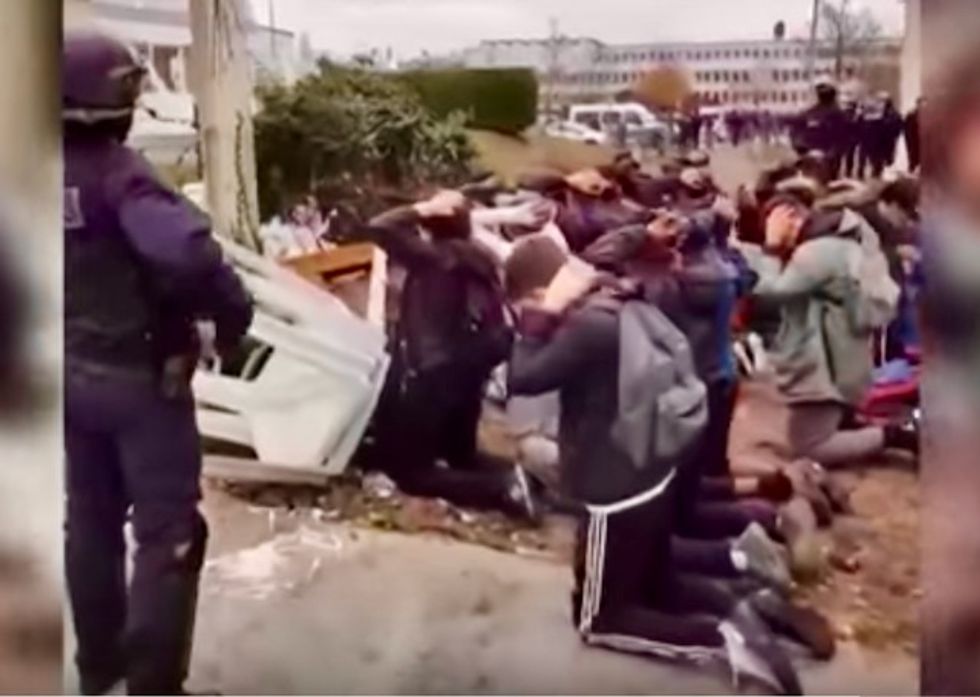 Images of dozens of high-school pupils kneeling with their hands behind their heads during mass round-ups sparked an outcry Friday as France braces for more violence at "yellow vest" protests this weekend.

Leftwing politicians have expressed outrage at the videos, which have gone viral on social media, showing the teenagers kneeling as riot police barked orders at them.

"Whatever wrong was done, nothing justifies this filmed humiliation of minors," Socialist leader Olivier Faure tweeted.

"There is no need to pour even more oil on the flames."

The students were detained Thursday in the Paris suburb of Mantes-la-Jolie, in unrest that has spread to dozens of schools during three weeks of anti-government demonstrations.

AFP / Céline AGNIELA total of 146 people were arrested outside the high school in the Paris suburb of Mantes-la-Jolie, after protesters clashed with police and burned two cars

A total of 146 people were arrested outside the town's Saint-Exupery high school after protesters clashed with police and burned two cars.

Laurent Saint-Martin, a senior member of the ruling Republic On The Move (LREM) party, said around 40 of the students were masked and carrying equipment to be used in vandalism and arson.

But he too described the videos as "shocking", telling Franceinfo radio: "It's right to be angry, looking at these images."

Protests at some 280 schools against stricter university entrance requirements have added to a sense of general revolt in France as the "yellow vest" protests rumble on.

The "yellow vest" protests, named after the safety jackets worn by demonstrators, came to a head in Paris last weekend with the worst rioting the capital has seen in decades.

The protests began on November 17 in opposition to rising fuel taxes, but have since swollen into a broad movement against Emmanuel Macron and the biggest challenge of his presidency.

The protesters are furious at rising costs of living blamed on high taxes, and accuse former investment banker Macron of favouring the rich with his policies.

Hailing mostly from rural and small-town France, they say Macron is out of touch with ordinary people. Many are calling on him to resign.

Farmers have also called for demonstrations every day next week, while two truck driver unions plan an indefinite sympathy strike from Sunday night.

Four people have died in accidents during the "yellow vest" protests and political leaders from across the spectrum have appealed for calm.

But many "yellow vests" are urging fresh protests this weekend, saying a string of government concessions are not enough.

An interior ministry official told AFP that authorities were bracing for "significant violence" Saturday, based on indications that protesters on both the far right and far left are planning to converge on Paris.

The Eiffel Tower and scores of shops on the Champs-Elysees will be closed Saturday as a precaution, as will major museums including the Louvre.

The closures are likely to cost thousands of euros in lost revenues as shoppers stay clear for a second consecutive weekend in the run-up to Christmas, following scenes of burning barricades and cars last Saturday.

The government this week scrapped planned fuel tax hikes planned for January -- one of the protesters' core demands -- and announced a string of other measures designed to help low-income families.

AFP/File / Philippe LOPEZThe Eiffel Tower and scores of shops on the Champs-Elysees will be closed Saturday as a precaution, as will major museums including the Louvre

The climbdown over the fuel tax -- intended to help France transition to a greener economy -- marks a major departure for Macron, who has previously vowed not to be swayed, like previous presidents, by large street protests.

Prominent "yellow vest" Benjamin Cauchy has urged Macron to meet a delegation of protesters to defuse a situation that he said had brought France "to the brink of insurrection and civil war".

AFP / REMY GABALDAThe protests began on November 17 in opposition to rising fuel taxes, but have since swollen into a broad movement against President Emmanuel Macron

"We're asking him to meet us to negotiate on spending power, which is what underpins all this anger," Cauchy told AFP.

Macron, who has not commented publicly on the crisis since Saturday, is due to speak about the protests early next week.

Prime Minister Edouard Philippe said the government was ready to consider "any measure which would allow us to boost spending power".

But Macron's office has said he will stick to his decision to cut a "fortune tax" on high-earners, abolished last year in a bid to boost investment.

That decision is deeply unpopular with protesters and, along with a string of comments deemed insensitive to ordinary workers, has led critics to label Macron a "president of the rich".