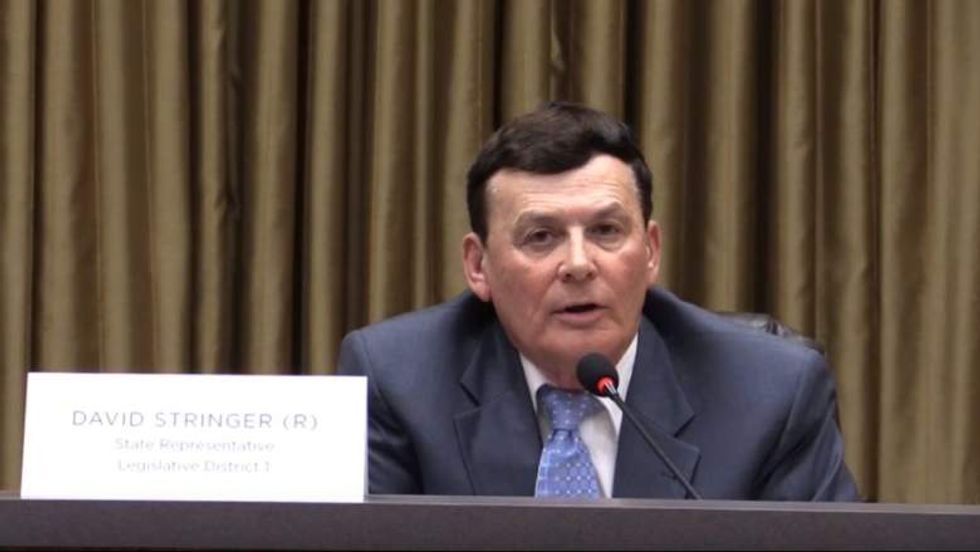 A GOP lawmaker in Arizona has been denounced and forced to resign from a commission chairmanship after racist comments he made were revealed -- but the Republicans closest to him still refuse to call him out.

The Arizona Mirror reported that GOP state Rep. David Stringer's seatmates in the state's Yavapai County, both of whom are also Republicans, have been mum on the subject of his racist remarks.

On November 30, the Phoenix New Times reported that Stringer was recorded telling students at Arizona State University that black people "don't blend in," that non-native English speakers are a "burden" and that Somali-Americans don't look like "every other kid."

After Republicans began lining up to condemn the lawmaker's most recent racist comments, he resigned from his chairmanship on the House Sentencing and Recidivism Reform Committee.

Yet for incoming Arizona Senate President Karen Fann, Stringer's seatmate in the state's upper chamber,  the jury is still out.

“I’m not prepared to make a statement at this time because I am waiting to see what they are going to do over in the House and what they’re going to do on the state and county level first," Fann said, adding that it would be "inappropriate" for a Senate member to comment on House matters.

She also said that she is waiting to see what the Arizona Republican Party and Yavapai County Republican Party do about Stringer, who garnered further negative coverage earlier this year when he said there "aren't enough white kids to go around" and that "immigration today represents an existential threat to the United States."

Republican Rep. Noel Campbell, the report noted, said he had no comment and hung up the phone when reached by the Mirror.

Meanwhile, Arizona's GOP Gov. Doug Ducey reiterated his call from over the summer for Stringer to resign in light of his increasingly racist comments and said he agreed with the Republican House Speaker's decision to strip him of his chairmanship.