‘Something weird happened with the NRA in 2016’: Maddow says their ‘money just doesn’t make sense’ 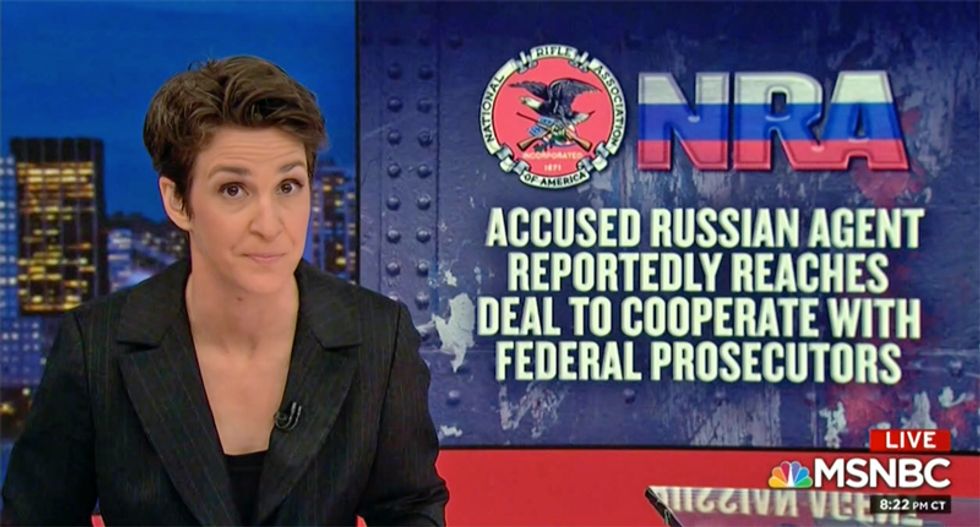 MSNBC's Rachel Maddow on Monday examined the intersection of the National Rifle Association, Donald Trump's 2016 presidential campaign, and accused Russian spy Maria Butina -- who has reportedly been flipped by prosecutors and intends to plead guilty as part of a plea agreement.

"The National Rifle Association -- the NRA -- is thought of, and has long been thought of, as a powerhouse in Washington and American politics when it comes to lobbying and influence and especially money in elections," Maddow noted.

"The NRA does spend a ton of money every election cycle, and especially every presidential year, but clearly something weird happened with the NRA in 2016. For some reason, in 2016, the NRA just exploded its previous spending records," Maddow reported. "And importantly, they made sure that most of that money came out of an arm of the NRA that doesn't disclose anything about its donors."

"That $30 million they spent on Trump, that is triple what they spent the last time around in the last presidential election on Mitt Romney -- almost three times what they spent on Romney," she explained. "Why did the NRA go off the charts for him in a way they never had for any other candidate in any other election?"

"The NRA money 2016 campaign just doesn't make much sense given the history of the NRA and given the campaign," she concluded.

Maddow wondered what we could learn if Butina is cooperating with investigators.

"Could the resolution of Maria Butina's case finally give us a window into what has been going on here?" Maddow asked. "If the FBI has been investigating, among other things, the possibility that the NRA was used as a large-scale conduit for Russian money into the effort to elect Trump president, will the Maria Butina case give us a window into that investigation and it's potential conclusions?"