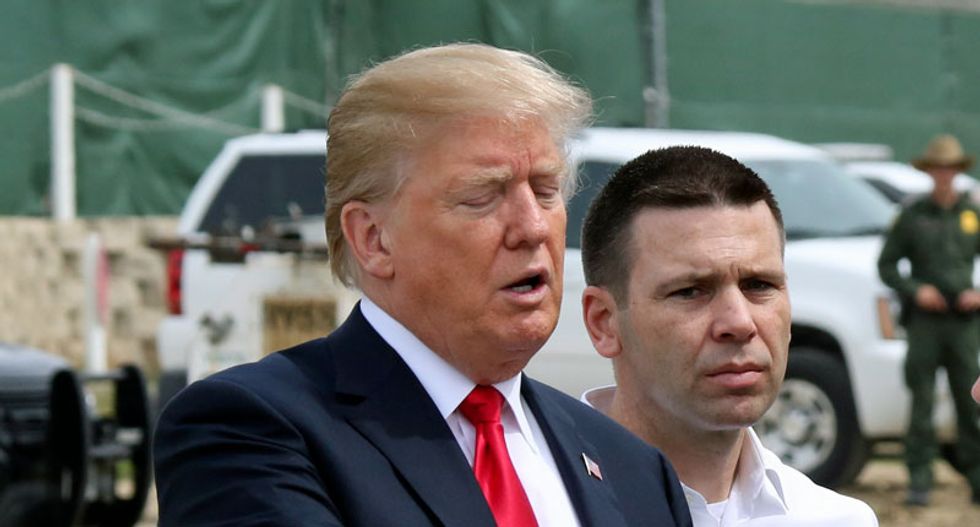 President Donald Trump has spent the past five days of the government shutdown holding federal workers hostage until Democrats meet his $5 billion ransom over a wall. But there's one major problem with his latest budget showdown.

Trump's cadre of cable news shills argue that Democrats have already funded his "wall" in previous votes. Conservative Steve Cortes claimed Democrats supported "border security" this year and last year in budget bills. The reason they're not doing so now, according to Cortes, is that it's Trump's wall isn't President Barack Obama's idea.

While the talking point sounds like it was an idea some communications intern thought was "genius," it puts Trump in an awkward predicament. If Democrats already funded Trump's "border security" in previous years, why does Trump need more money now?

Closer examination reveals the Democrats supported funding of border security in the previous spending bill and it even included $1.6 billion for a border fence. At that time, Trump was demanding $25 billion for his concrete wall. But the president hasn't even used the money he got this year.

Merkley explained that Trump is "sitting on" over $1 billion and he's only spent six percent of it.

Rep. Chris Murphy (D-CT) made the same observation, suggesting the president use the money he's got first.

Meanwhile, 59 percent of Americans don't want to fund Trump's wall, a CBS poll found. Trump has claimed until very recently that Americans would not foot the bill for his project.

"Mexico will pay for it, believe me," Trump told Americans. "It's so easy. Just rely on me."

It begs the question: if the president truly wanted to secure the border, why isn't he spending the money he has to do it? It could be that Trump and the GOP don't actually want border security and instead want to stage a fight with the new Democratic Congress to see if they'll cave.

Chris Wray: FBI report on right-wing radials delayed because ‘domestic extremism has mushroomed’ in past year

Rep. Matt Gaetz (R-FL) on Wednesday predicted that the Department of Justice would exonerate him in a child trafficking case by indicting people who he claims were trying to extort money from his family.

Earlier this month, 62-year-old Stephen Alford was indicted for multiple charges relating to wire fraud. Gaetz claimed that Alford had attempted to extort money from his family with the promise of ending a child sex trafficking investigation into the congressman.

Denouncing Texas law, Uma Thurman reveals she had abortion as a teen

American actress Uma Thurman, in a newspaper column expressing opposition to a near-total ban on abortion in Texas, revealed Wednesday that she had an abortion as a teenager.

"It has been my darkest secret until now," the 51-year-old Hollywood star said in the op-ed published in The Washington Post.