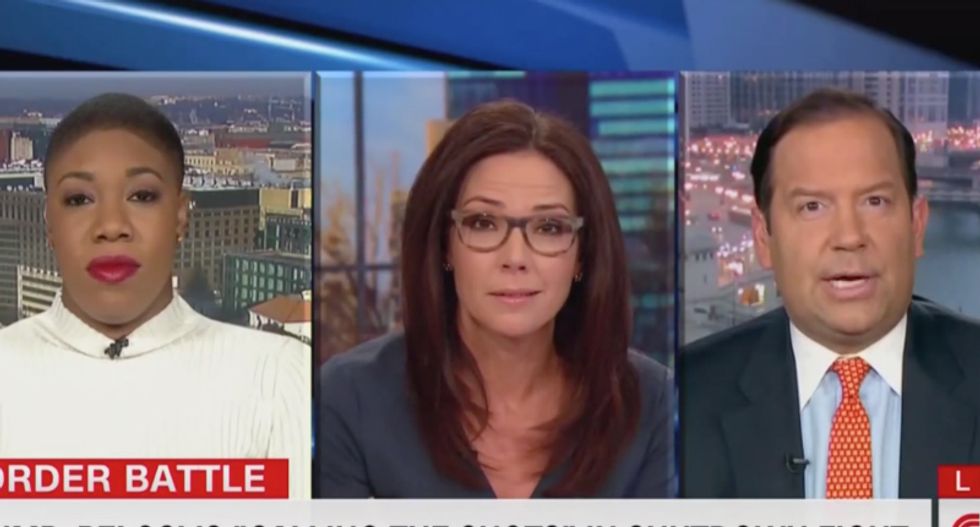 Steve Cortes, former head of Hispanics for Trump, was reduced to a smoldering heap of ashes after Symone Sanders dropped a rhetorical bomb on his claim that Americans support President Trump's proposed wall on the US-Mexico border, despite polling that shows otherwise, and that taxpayers were simply "fronting the cash" to our southern neighbor.

"To me the poll that's most important is the 2016 election, where the wall was Donald Trump's signature issue," Cortes said, as Sanders struggled not to laugh. "He could not have been clearer about that topic, and the people spoke resoundingly."

"He was also very clear he said Mexico would pay for the wall. We know from Mexican presidents current and past they will not pay for that wall," replied host Erin Burnett. "You can't do funny math and move money around in the government to get Mexico to pay for the wall and the most recent polling, whether you like it or not, says we don't want the wall."

"I'm not surprised that Mexico isn't offering to pay for the wall, of course not," Cortes sputtered, insisting that Trump "delivers on his promises" as both Sanders and Burnett began laughing at him. "He's going to figure out how Mexico pays for it, we are effectively fronting the cash, he's a developer, look at it as a construction loan."

"If I may, if I may. This is intellectually dishonest," Sanders shot back. "What the president campaigned on, among other things, was in fact that Mexico would build the wall. It was such a popular phrase that folks would shout it back at his rallies."

"The president did not campaign on 'we would front the money for the wall to Mexico to pay for it,'" she continued, pointing to polling that showed not only that Americans don't support a wall, they don't support shutting down the government over it either.

"What has happened here is we are now in day six of a partial government shut down. That means the Department of Homeland Security, the State Department, the Justice Department, the Agriculture department, among other departments, are now shut down because the president threw a temper tantrum and would not compromise," Sanders continued, in a blistering diatribe before discarding Cortes's central thesis.

"I would like to remind him there was an election in 2018 where an overwhelming number of Republicans on the House side ran on immigration," she said. "It was their closing argument. It was the president's closing argument. and they resoundingly were rejected. The American people rebut that message."

"So I'm really not sure how this is a sound strategy," she concluded. "This is how they lost the House."