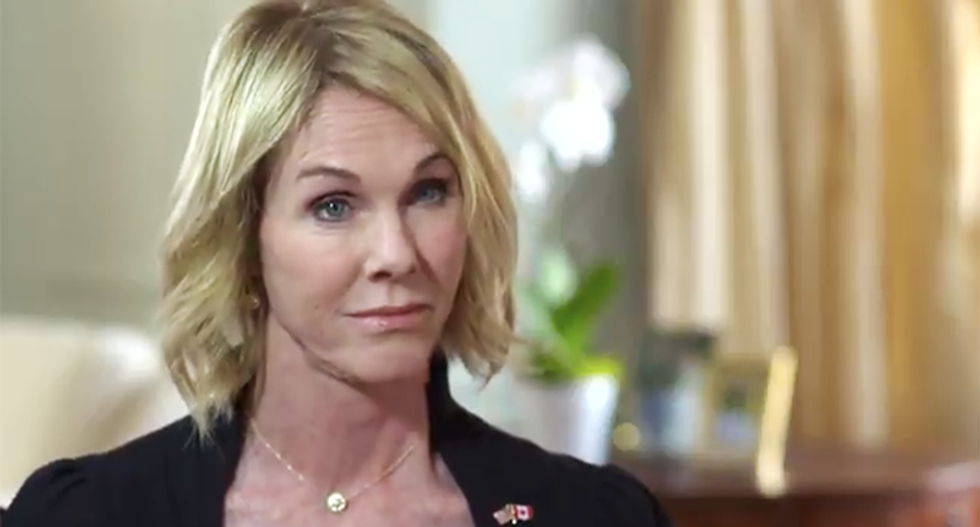 U.S. Ambassador Kelly Craft isn't sure what science is really all about (Photo: Screen capture)

President Donald Trump's new ambassador to Canada is getting destroyed for a 2017 interview she gave about climate science.

An interview with Canadian Broadcasting Corporation (CBC), U.S. Ambassador Kelly Craft explained that she believes in "both sides of the science" surrounding climate change.

"I think that both sides have their own results, from their studies, and I appreciate and I respect both sides of the science," Craft said.

She noted that President Donald Trump's approach to climate change might be different than Canada's but that both want to "better our environment and to maintain the environment."

Trump has said that he doesn't believe in climate change, to believing it was caused by China and most recently that he might believe in it, but disagrees humans are responsible for an increase in carbon emissions. Canadian Prime Minister Justin Trudeau believes in climate science and that humans should do their part to cut their carbon footprint.

The internet did what it does best - break out into mockery for what they thought was so illogical it was comical. You can see the best takedowns below:

@CBCPolitics Does she believe in both sides of the science on the flat earth debate as well?
— Brian LaBelle (@Brian LaBelle) 1544087614.0

@CBCPolitics This is the kind of meaningless equivocation people need to make under a bad leader. Someone has to be… https://t.co/hWQb58cWVW
— Helen Jackson (@Helen Jackson) 1544099102.0

@CBCPolitics There are no two sides. One is all the scientists who have studied it and the other are people deciding not to believe it.
— Aimee Giese (@Aimee Giese) 1544110500.0

@CBCPolitics The two sides of the science are: climate change is one of the greatest threats humanity has ever crea… https://t.co/LIPhCOZOJP
— David Rothkopf (@David Rothkopf) 1544103664.0

Heliocentrism is the science that the Earth and other plants revolve around the sun.

Just when you thought nothing could beat Sarah Palin. Allow me to introduce Kelly Craft. I believe in both sides o… https://t.co/GTddubPNDn
— Dr. Ellen Seats (@Dr. Ellen Seats) 1544121431.0