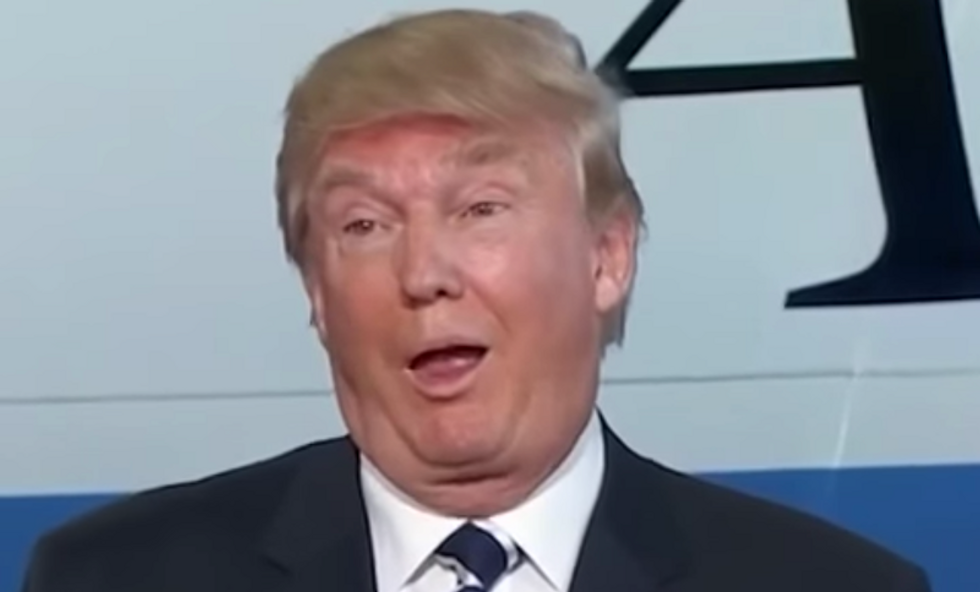 Donald Trump wouldn't be wrong to brag that his presidency has more wheels on it than any other in American history. Every other week, it seems, analysts warn that they're finally coming off this "fine-tuned machine" and yet his approval ratings have remained stubbornly fixed within a narrow range for the better part of a year.

But it does feel like something’s different this time.

For one thing, his abrupt, seemingly spontaneous decision to withdraw troops from Syria and draw down our force in Afghanistan is freaking out Republicans (and hawkish Dems) in a way that Trump’s penchant for stomping all over the international diplomatic order for the past two years has not. “It’s one thing to have issues on the domestic side," Sen Bob Corker, a Tennessee Republican, told The New York Times, but "when you start willy-nilly foreign policy moves that are against U.S. interests, that is a wake-up call for people in the Senate.”

This is also the first period of real crisis since Trump’s midterm shellacking, so his veneer of political invincibility has shown some cracks which weren't obvious last year. And of course the stock market is tanking, which reportedly worries Trump more than the fallout over Mattis flipping him the bird on his way out or the political perils of shutting down the government during the holidays over funding for a stupid wall that Mexico was supposed to pay for.

Speaking of which, last year analysts at Standard and Poor’s estimated that shutting down the federal government cost the economy $6.5 billion per week in lost productivity and various downstream effects. As of this writing, we are experiencing the third shutdown this year, which is unprecedented with one party controlling all the White House and both chambers of Congress.

That the economy is tanking while the rats flee the sinking Trump Ship and our adversaries gloat over our increasingly incoherent foreign policy is unsurprising. In fact, it’s probably the least surprising thing about Trump’s first two years in office. Conservatives have been claiming that government is an inherently dysfunctional joke for generations, but it turns out that governing well requires some knowledge and skill. What we’re seeing is simply the entirely predictable consequences of putting a buffoonish reality TV star who doesn’t in charge of the world’s only mega-power.

It’s impossible to overstate how wasteful Trump’s erratic government is, and his brand of wasteful government tends to be especially stupid. A case in point this week was the announcement that the Pentagon is preparing to stand up Trump's Space Force, which will “reside” within the Air Force.

The important thing to understand here is that the Air Force was already tasked with serving as our military “space force.” So the agency protected its turf and will continue to have that mandate. But now this new sub-agency will have a whole new layer of bureaucracy -- there will be all sorts of redundancies just as there are between the Navy and the Marines. And this new bureaucracy will of course protect itself moving forward. It’s relatively easy to create a new agency and almost impossible to get rid of one. Space Force will grow, and it will continue to cost us billions of unnecessary dollars every single year long after Trump’s presidency has become a bad memory.

And please note that the entire purpose of Trump’s Space Force was to change the subject from the revelations that his regime was putting immigrant babies in cages. That’s it.

Impunity should be especially concerning within the judiciary itself.

“All of the ethics complaints filed against Justice Brett Kavanaugh during his confirmation proceedings were dismissed on Tuesday after a panel of federal judges concluded that Kavanaugh is no longer covered by the judiciary's disciplinary process,” reported Zoe Tillman for Buzzfeednews.  “Supreme Court justices are not bound by the federal judiciary's code of conduct that applies to lower court judges, and the high court does not have its own formal internal disciplinary system.”

Meanwhile, ICYMI, it was reported this week that DOJ ethics officials urged “Acting Attorney General” Matt Whittaker to recuse himself from the Russia probe, to which he basically replied, “the only reason I’m here is to obstruct that probe so why would I recuse?” (We paraphrase.)

The regime is unilaterally imposing “work requirements” on food stamp recipients, which sounds better than “making them file a ton of pointless paperwork” in hopes that they'll just give up.

Meanwhile, according to The Arkansas Times, “almost 17,000 Arkansans have now lost their health insurance due to the state's experimental work requirement for certain low-income adult Medicaid beneficiaries, according to a monthly report released by the state Department of Human Services on Monday.”

The regime is eager to approve similar “experiments” conducted by red state governments.

According to MoJo’s Rebecca Leber, the Environmental Protection Agency (protecting the environment is right there in its name!) is now “fact-checking” the multi-agency, peer-reviewed National Climate Assessment with citations to… The Daily Caller.  What could go wrong?

In somewhat related news, HuffPo reported that a lawyer whose client list includes Exxonmobil “crafted comments in defense of a White House nominee for a top environmental post as if they were written by President Donald Trump himself” and the regime then disseminated those talking-points to reporters asking about the nomination of Kathleen Hartnett White, who is of course a climate change denier. The emails, wrote Itai Vardi, “further illustrate[] the powerful sway the fossil fuel industry and the Koch network has on Trump’s administration and its energy policies.”

This year, Reporters Without Borders added the United States to its list of the five most dangerous countries for journalists to operate in for the first time.

Each week, we try to leave you with some positive news, but we’re not sure this week’s Supreme Court ruling against the regime counts. On one hand, in a 5-4 decision, the court upheld a lower court’s block on Trump’s “asylum ban,” which is good. At the same time, four justices of the United States Supreme Court were willing to ignore very clear, black-letter law to give Donald Trump a win, which is really quite nerve-racking.

Less ambiguously, on Wednesday a different federal court “ruled that most of former attorney general Jeff Sessions' decision from June making asylum claims more difficult to advance by those facing domestic or gang-related violence in their home country was illegal — issuing a broad order that also allows some would-be asylum seekers a second chance to make their claims.” Chris Geidner has the details on that case at Buzzfeednews.