Volunteers work hard to stave off shutdown chaos at US parks 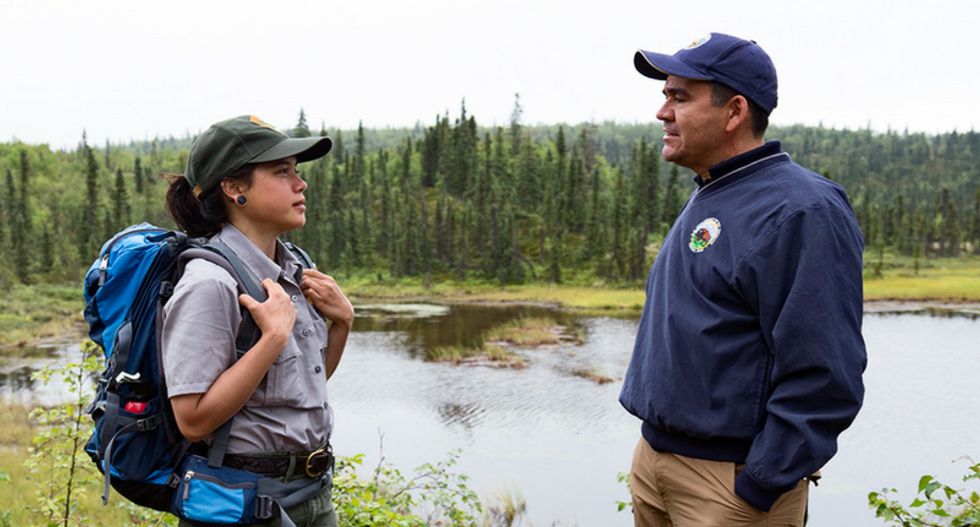 Sabra Purdy is just back from Joshua Tree National Park in southern California, which was crammed with tourists. It is high season, and to prevent chaos from the partial shutdown of the US federal government, she put on her gloves, cleaned toilets and picked up trash.

The 40-year-old businesswoman joined other members of the business community who benefit from park-related tourism, and together they performed some serious maintenance in the 790,737-acre (320,000-hectare) park while waiting for politicians in faraway Washington to end their budget impasse.

The shutdown began on December 22, with Congress at loggerheads over whether to include the $5 billion sought by Donald Trump to fund a wall on the border with Mexico, a central pillar of his election campaign and of his presidency.

The result: hundreds of thousands of federal workers were sent home without pay, including 21,383 employees of the National Park Service (NPS), responsible for 418 facilities nationwide, including national parks, monuments, historic sites and even the White House.

But most parks were left open, and without the usual entry fee.

"In the long run, the rangers who work here committed to preserve the area and just their mere presence probably keeps things from happening that shouldn't," said Sherman Craig, who was visiting Joshua Tree from New York.

A Park Service statement issued for a shutdown earlier in the year laid out a bare-bones plan.

"The NPS will not operate parks during the shutdown -- no visitor services will be provided," it said.

That is where the community around Joshua Tree came in, determined to help keep the magic in the air.

The Sonora and Mojave deserts meet on the park's west side, amid a spectacular backdrop of rocky mountains, boulders and a type of cactus called the Joshua Tree that gives the area its name.

Since the shutdown began, dozens of volunteers have been traveling to the park to clean overused bathrooms, remove mounting piles of garbage and carry out other, equally unfragrant work.

Purdy, who eight years ago opened a tour company for climbing trips with her husband Seth Zaharias, said that when she arrived at Joshua Tree on Friday she found disorder but "no chaos."

"Unfortunately, this isn't the first shutdown, and probably not the last."

Volunteers often take the opportunity to guide tourists and explain the rules about protecting the park's precious and delicate ecosystem -- rules often flouted during the shutdown.

Local businesses started organizing their fairly informal grouping even as Congress was failing yet again to get its budget deal done.

All supplies for the effort come from the pocket of local businessmen, though some donations are starting to arrive from other park lovers.

"There are about 150 latrines in the park. And I estimate that we have distributed more than 500 rolls of paper; I do not think we have reached all the bathrooms, only the most important ones," said John Lauretig, executive director of the NGO Friends of Joshua Tree National Park, which is helping coordinate while also working to protect local wildlife.

"We are trying our best to maintain normalcy, but you know, we don't really have the authority or the power or the ability to stop people from doing really egregious acts: driving off-road, or chopping down trees or stealing artifacts.

"I haven't seen any of that. But you know the potential is there," he said.

On Twitter, someone posting as "Defend Joshua Tree" decried an "absolutely ridiculous" breakdown of conditions in the park -- with trash piling up, people driving off-road and even stringing Christmas lights between delicate Joshua Tree cacti. The poster called for the park to be closed until the budget showdown ends.

But for Purdy, Lauretig and many others dependent on tourism, that would be the worst possible turn of events: the time between Christmas and New Year's is among the park's busiest.

When the park was shuttered for 17 days in 2013, "it was devastating for us financially," Purdy said.

"Back in 2013 when the park was closed and people were not visiting, the local restaurants and the local community were laying people off. They were sending people home because there just wasn't any money or visitors," he said.

In December 2017, the park welcomed 285,493 visitors. This year, there have been 2.4 million through November this year.

In the current shutdown, some US parks have closed completely, while others operate partially. In California, the popular Death Valley and Channel Islands national parks remain open.

At Joshua Tree, the coming days are expected to bring a surge of tourists, with zero official staff to greet -- or police -- them.

"I wish the government was just able to function and that we could have the parks staff," said Purdy. "Because we need them."

Anthony Ornato, a former Secret Service official and White House deputy chief of staff in the Trump administration, told the House Select Committee investigating the January 6th Capitol riots that he could not recall a conversation he'd had with White House aide Cassidy Hutchinson.

Sources tell CBS News that Ornato testified under oath this week and "told lawmakers and committee staff that he did not recall the conversation with Hutchinson" where she alleged that he told her former President Donald Trump had lunged at a Secret Service official after being told that he would not be traveling to the United States Capitol on January 6th, 2021.

I have said what I want to say about Monsieur Muskrat’s takeover of Twitter. I don’t want to give him more of my attention than what’s necessary for doing my job. I don’t want to, by giving him my attention, give you the impression that he’s all that important.

But I do want to attend to, and therefore bring your attention to, the left-liberal reaction to his enfeebling of America’s premiere public forum. There seem to be two camps, possibly a third. I see plenty of overlap among them. Each tells us something about ourselves.