WATCH: Trump booster goes down in flames on CNN after he tries to blame shutdown on Chuck Schumer 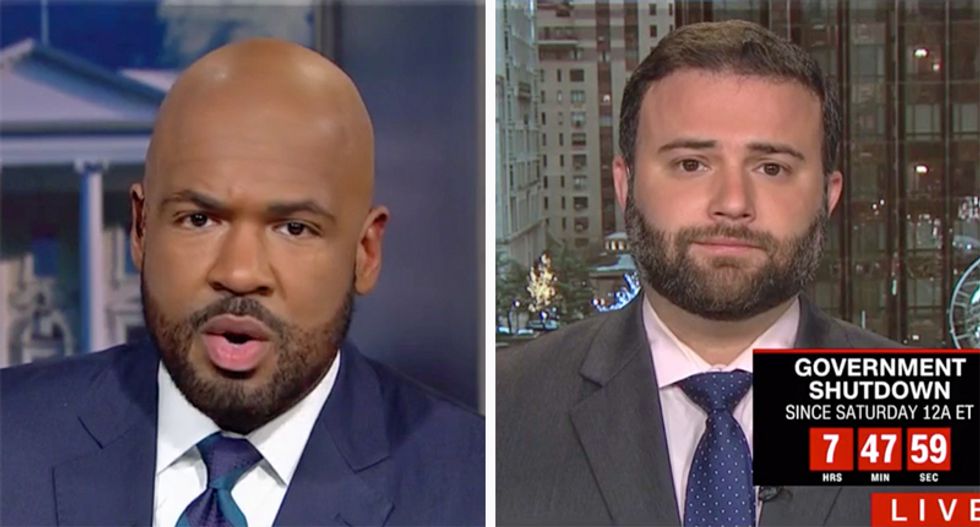 CNN anchor Victor Blackwell had to repeatedly correct a prominent Donald Trump supporter who was trying to argue that the shutdown of the federal government was the fault of Democrats.

Republicans control the House of Representatives, the U.S. Senate and the White House, but New York City council member Joseph Borelli tried to spin the closure as the fault of Democrats, referring to Sen. Chuck Schumer (D-NY) and calling it the "Schumer shutdown."

Borelli was the co-chair of Donald Trump's campaign in New York, the candidate's home state, where he garnered 36.5 percent of the vote.

The sticking point is Trump's demand for U.S. taxpayers to spend $5 billion to support his campaign promise of building a wall -- from sea to sea -- along the southern border.

Borelli said it wasn't just Trump demanding $5 billion for the wall, claiming it was also demanded by House Republicans.

"They already supported the legislation without it and so did the Senate," the host reminded. "This was something that -- after the president changed his mind, went back on his word, that he sent the vice president to the hill to confirm to Republican and Democratic legislators that he would sign the funding bill, he changed his mind."

"I think this is more about Chuck Schumer squeezing his members, not giving Donald Trump a win in the 11th hour and that's, frankly, where we are. It's a Chuck Schumer shutdown once again," Borelli argued.

"The president said he'd be proud to accept the mantle of the shutdown," Blackwell fact-checked. "How now does this 11 days later become the Chuck Schumer shutdown?"

Blackwell played a clip of Donald Trump from a few years ago arguing that the president would get blamed for a shutdown.

"Seems like your characterization of a 'Schumer shutdown' argues with the president's point there," Blackwell noted.

"Of course the president is going to be partially responsible for any partial shutdown," Borelli admitted. "This is the argument we had in January of 2018, earlier this year. That clearly was the Chuck Schumer shutdown."

"Joseph, all of this would seem to, I guess, stick if the president hadn't said, 'I will take the blame, I will not blame you' when sitting across from Chuck Schumer," Blackwell reminded. "He was proud to take up the mantle of shutting down the government for border security. But now you and he say that this is a Democratic shutdown."

"The president's promise was that Mexico was going to pay for this wall, $18 billion to $25 billion depending on whose estimate you believe. Why is he now handing this bill off to the American people?" Blackwell wondered.