WATCH: Trump hilariously ridiculed on CNN for bragging he knows more than anyone about everything 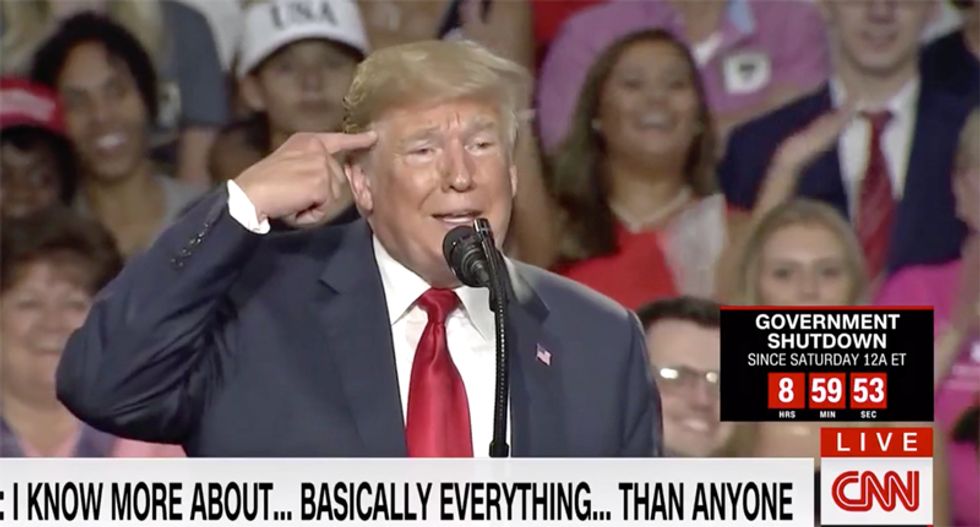 CNN chyron reading, 'Trump: I know more about ... basically everything... than anyone' (screengrab)

CNN on Saturday thoroughly ridiculed President Donald Trump for thinking he's smarter than everyone -- on every single subject.

Correspondent Jeanne Moos reported on the commander-in-chief's bragging of his intelligence by assembling a supercut of Trump's outrageous bluster.

"Nobody knows more about campaign finance than I do," Trump boasted.

"Nobody knows more about trade than me," he crowed.

"Nobody knows more about construction than I do," he bragged.

"I know more about ISIS than the generals do, believe me," he argued.

"There's nobody that understands the horror of nuclear better than me," he added.

Moos, however, said, "it's enough to make your head explode."

She explained Trump even claimed to know more about Sen. Cory Booker (D-NJ) "than he knows about himself."

"President Trump sure knows how to spew superlatives," Moos said.

She also noted how "a guy who doesn't like to read" claims literary superiority.

"I know words, I have the best words," Trump argued. "Nobody loves the Bible more than I do."