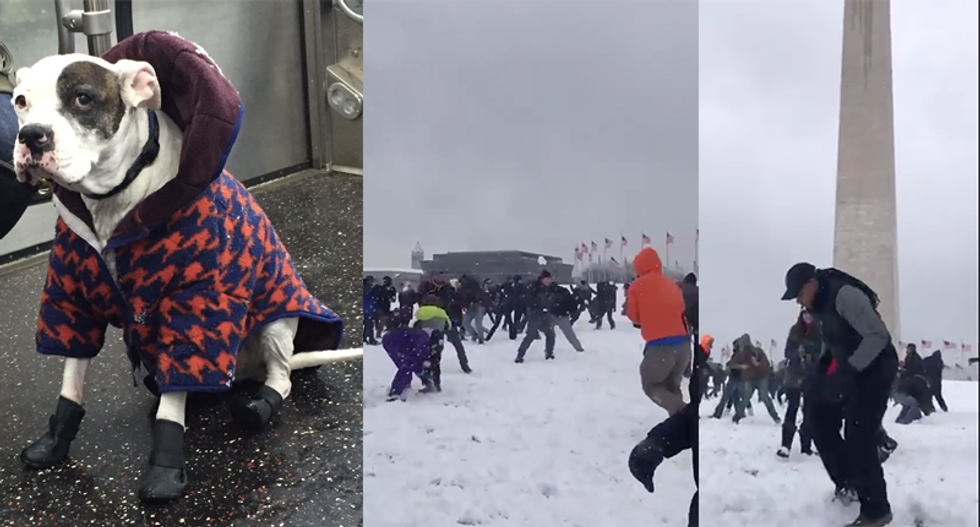 Puppy on the metro and snowball fight on the National Mall (Photos: Screen captures/Twitter)

Nine people have been killed from the snowstorm that hit the central United States and moved on to the east coast. The deaths include one state trooper in Illinois working the scene of a snow-related accident. Missouri endured the worst of the storm, causing massive traffic problems resulting in 800 crashes injuring 57 and killing four, the state's highway patrol reported.

In Washington, DC, a city snowball fight broke out on The Mall, where both parties came together to throw frozen water at each other.

❄️SNOWBALL FIGHT❄️ My first snow in DC and there was already a massive snowball fight on the National Mall earlier… https://t.co/unHmvK574r
— Tessa Weinberg (@Tessa Weinberg)1547420659.0

Here are some photos and videos that are shocking, hilarious or adorable:

Here's one woman who hilariously mocks the president and his claims of "fake news" using the snowstorm as the "fake" story of the day.

Jim Acosta here in Northeast Ohio, reporting on the fake "snow storm." I'm under this gazebo and there is NO snow u… https://t.co/nTqRwwu8Yp
— Kaitlin Bennett (@Kaitlin Bennett)1547327512.0

Then there's the DC sledders:

The Clemente Bridge in Pittsburgh

Finally got the first significant snowfall of the year in #Pittsburgh last night, which meant my first stop this mo… https://t.co/wSgWx5GJCa
— Dave DiCello (@Dave DiCello)1547388922.0

Meteorologist from Mississippi sees the Missouri snow for the first time:

Then there are the animals: