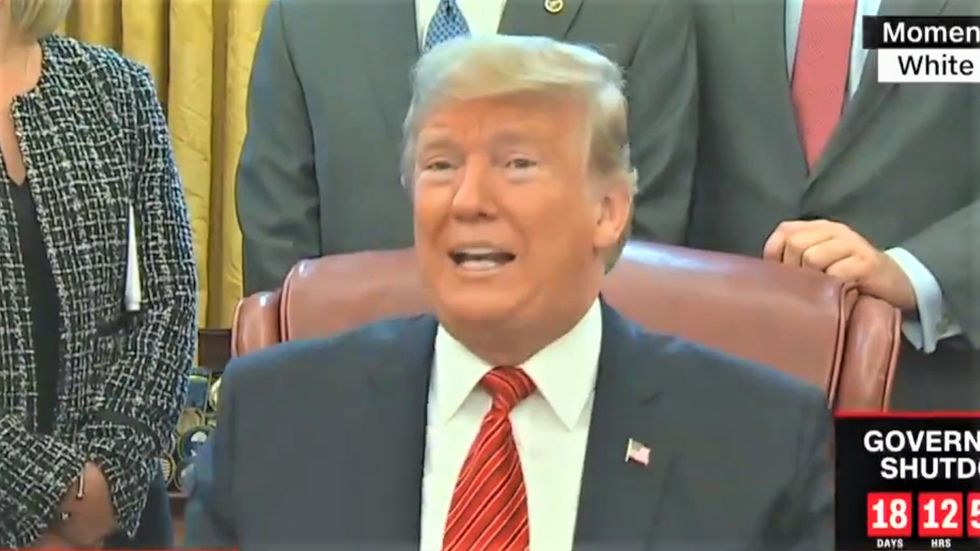 President Donald Trump on Wednesday took several questions from reporters on the day after his widely panned speech promoting his proposed border wall.

During his back-and-forth with reporters, the president made a number of nonsensical and incoherent arguments that were loaded with misinformation and faulty assumptions.

Below are the five most unhinged moments of Trump's latest press briefing with reporters.

"They have the best vehicles," Trump said of undocumented immigrants. "They make a lot of money. They have bigger, stronger, and faster vehicles than our police have."

2.) Trump claims that walls are more effective today than they were back in Medieval Europe. While addressing criticisms that his proposed wall is a "Medieval solution" to a modern problem, the president embraced the term and said he was proud to implement a Medieval-style wall.

"It's Medieval because it worked then and it works even better now," said the president, who didn't mention that, unlike today, airplanes did not exist during the Medieval period.

3.) Trump says that he knows the American people really support him on the wall because supporters in his Twitter mentions tell him he's doing a great job.

While polling shows that the majority of Americans do not favor a border wall and are even more opposed to shutting down the federal government over it, Trump insisted that comments on his social media account tell a different story.

4.) Trump blatantly lies about not wanting to shut down the federal government to get his border wall. When asked about the hardships his government shutdown is causing, Trump claimed that "this is not a fight I wanted" and that "I didn’t want this fight."

During a meeting with Democratic leaders late last year, however, Trump said that "I am proud to shut down the government for border security."

5.) Trump tells ABC's Jon Karl that he would make a terrible president after Karl asks him a question about signing bills that would start paying workers again.

Karl asked the president why he wouldn't consider signing a smaller subset of bills that would reopen key portions of the government and ensure that federal employees don't have to keep working for no money.

Trump then asked Karl if he would sign those bills if he were president. After Karl hesitated, Trump told him that "you should never be in this position because you'd never get anything done."