Bauhaus design turns 100 as disputes over its legacy churn 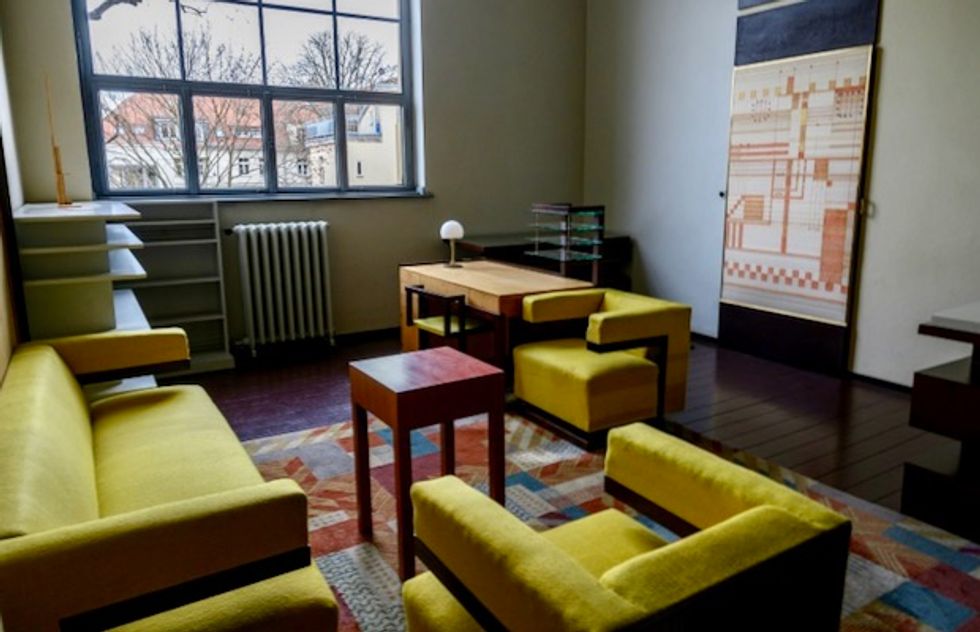 AFP / John MACDOUGALL Bauhaus was launched by Walter Gropius, whose reconstructed office is pictured, in Weimar, Germany, on April 1, 1919

Bauhaus, the design school that left its mark on everything from teapots to tower blocks and iPhones to Ikea, marks its centenary this year, touching off a politically charged debate about its lasting impact.

The influence of Bauhaus, created during the turbulent period between the world wars and finally chased out of Germany by the Nazis, can hardly be overstated.

Its radical "form follows function" and "less is more" tenets have become so commonplace that the aesthetics of the modern world are unthinkable without them.

Weimar, with its winding cobblestone alleys and primly restored historical buildings, might seem like an unlikely ground zero for the bombshell launched by Walter Gropius with the school's founding on April 1, 1919.

AFP / John MACDOUGALL Bauhaus was launched by Walter Gropius, whose reconstructed office is pictured, in Weimar, Germany, on April 1, 1919

But the small city 250 kilometres (150 miles) southwest of Berlin has been an intellectual hive for centuries and is now at the centre of Bauhaus commemorations around the country and spanning the globe.

"Bauhaus is among our country's most globally influential cultural exports," President Frank-Walter Steinmeier said as he kicked off the celebrations this week.

He noted that when the movement was run out of Germany after Hitler rose to power in 1933, it touched off a diaspora that would end up spreading Bauhaus's gospel far and wide.

The clean lines of the UN headquarters building in New York, Tel Aviv's "White City" of 4,000 apartment blocks with pearly facades, mass-market home furnishings and most smartphones owe a large debt to the Bauhaus vision.

The design school, which also counts among its disciples Russian abstract painter Wassily Kandinsky and Swiss-born surrealist Paul Klee, had at its core the idea of making beautiful design accessible to all social classes.

AFP / John MACDOUGALLAt its core, Bauhaus founded by Walter Gropius, had at its core the idea of making beautiful design accessible to all social classes

The reformist vision of the international group of men and women who practised it was rooted in modernist thought and inspired by leaps in technological development after World War I.

"There was of course great suffering and horror after this mendacious war, which had such unbelievably devastating consequences," said Anke Bluemm, a curator with the Bauhaus Foundation in Weimar.

"The artists came together to create a new forum for art with very utopian, idealistic ideas."

Winfried Speitkamp, head of Weimar's Bauhaus University -- which still uses the original campus to teach the school's hands-on principles to new generations -- said the aim was nothing less than to build a new democratic society from the rubble of the kaiser's empire.

"They wanted to break with a very authoritarian, very military-oriented monarchy. But what should that look like?"

Flat roofs, little ornamentation -- the minimalist approach was intended to be more affordable and less steeped in fusty German tradition.

Bauhaus's birth dovetailed in time and place with the start of the inter-war Weimar Republic, and it was their shared revolutionary spirit that made them targets of the Nazis.

"It is typical for the far right that anything that challenges the homogeneity of the people and propagates openness and diversity is seen as dangerous," Speitkamp said.

He said "only five years ago" the Bauhaus jubilee might have been just another staid anniversary.

But at a time when Europe and countries around the world were again caught between clashing visions of cultural identity, the discussion around it had become "explosive".

"Do we want to continue going down the path of globalisation, of free movement and cultural exchange? Or, as some nations are saying, do we need to make our borders stronger and define a nation by ethnicity?

"That is what the Bauhaus debate is also really about."

Speitkamp cited a controversy in the run-up to the anniversary in which leftist punk band Feine Sahne Fischfilet was meant to give a concert on the Bauhaus campus in Dessau, where the school was forced to move in 1925.

The gig by the group was hastily cancelled in October by the Bauhaus Foundation, citing "far-right threats" and a desire to steer clear of "political extremism -- whether from the right, the left or elsewhere".

The move was widely slammed as cowardly and blind to the movement's roots.

Instead a Dessau theatre held the event, which passed off without incident, and the foundation later pledged to remain an "international, open and transparent place for societal debates in the spirit of the historical Bauhaus".

AFP / John MACDOUGALL Anke Bluemm, a curator with the Bauhaus Foundation in Weimar, at the Haus am Horn, the first single-family home designed according to Bauhaus principles, being restored for the centenary

The Bauhaus year will be marked by the openings of grand new museums in April in Weimar and in September in Dessau -- both cities in the ex-communist east, which has seen a surge in support for the far-right AfD party.

A major expansion of Berlin's Bauhaus Archive, which holds the movement's largest collection, is due for completion in 2021.

This week Weimar offered a sneak preview to a small group of journalists of the Haus am Horn, the first single-family home designed according to Bauhaus principles.

The squat, boxy structure with innovations such as a prefabricated kitchen was completed in 1923.

It is undergoing a thorough restoration and will open to the public in May, furnished with Bauhaus classics.