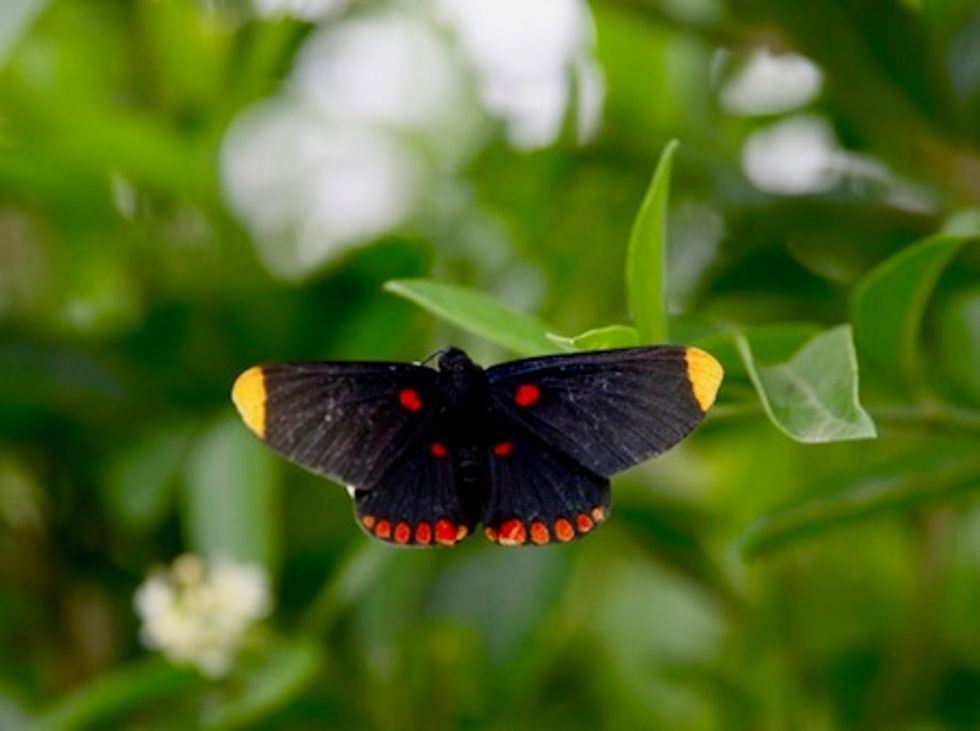 More than 200 species of butterfly have been spotted at the National Butterfly Center in Mission, Texas -- a possible victim of President Donald Trump's border wall project AFP / SUZANNE CORDEIRO

In Mission, Texas, the construction of part of a long-promised wall on the border with Mexico to stem the tide of undocumented migrants is already in progress.

Among the many who will be affected? Butterflies.

Mission, located in the lower Rio Grande Valley, is home to the National Butterfly Center, a private non-profit 100-acre (40-hectare) preserve dedicated to conservation of the insects in their natural habitat.

But the wall -- a key plank of President Donald Trump's immigration policy -- could end up chopping the area in half, and severely complicate any work being done to save the butterflies that flutter through.

"This land used to be an onion field," explains Luciano Guerra, who is responsible for education outreach at the center. "We converted it back to native habitat."

In the end, more than 200 species have been counted here. In spring and autumn, "we can have 80 to 100 species of butterflies here in one day," Guerra says.

Among those are the easily recognizable monarch, with its black and orange wings; the queen butterfly, native to North and South America; and the bright orange passion butterfly.

Along the banks of the Rio Grande, which forms a natural border with Mexico, there are also bobcats, coyotes, javelinas or skunk pigs, armadillos and Texas turtles.

Building a wall here would be "devastating," the center says on its website.

Marianna Trevino Wright, the center's executive director, traveled to Washington to plead her case with lawmakers.

The funding for the part of the wall that would run through the nature preserve -- unlike the money at the heart of a political showdown in the US capital -- was approved last year.

According to the Center, construction of the 33-mile (50-kilometer) stretch of barrier could begin in late February.

Trevino Wright impressed upon lawmakers (mainly Democrats) that the wall project is in violation of multiple environmental protection laws.

The wall and the glaring spotlights that would come with it will disrupt the "nocturnal activities of all plants and animals, transforming what is now a vibrant but endangered ecosystem into a biological desert," she said.

AFP / SUZANNE CORDEIROLuciano Guerra -- responsible for education outreach at the National Butterfly Center -- says he is a Republican and voted for Donald Trump in 2016, but will not vote for him again in 2020

"People say, 'Well, the butterflies can fly over it or fly through it or around it.' "Not necessarily," explains Guerra.

"Some butterflies fly lower to the ground -- they could not go over that 18-foot concrete wall."

Moreover, "when the bulldozers come in to clear the way for the border wall, they're going to knock down trees, plants, grasses and so on, which are host plants for the butterfly species we have here," he added.

Those trees also are the home of several species of birds, especially in the spring, and some mammals risk seeing their natural habitat destroyed -- or being hit by construction vehicles, Guerra warned.

AFP / SUZANNE CORDEIROA sticker saying "No to the wall" in Spanish is seen near a map of the National Butterfly Center, which is actively campaigning against the project

According to what the butterfly center has been told about the plans, the wall will essentially slice the reserve in half.

Will there be some kind of gate allowing personnel to travel back and forth? Unclear.

"They won't tell us that yet," Guerra said.

The center has filed suit against the federal government, claiming their private property rights are being violated.

"Chances are the lawsuit will not get heard, will not go to court until after the wall has already been built," Guerra admitted.

He says he is frustrated, and believes that Trump is exaggerating the extent of the crisis on the border.

"If there was a crisis, I wouldn't be living here," he said matter-of-factly.

In December, Guerra wrote an op-ed for The Washington Post explaining the plight of the butterfly reserve. In the column, he said he had voted for Trump in 2016.

Now, the long-time Republican says he will not cast his ballot for the incumbent in 2020.

We're not in favor of open borders. We do believe our immigration laws should be enforced, but there are other ways of doing it," Guerra told AFP.

"Walls are old and outdated."