Checkmate: The shutdown is an impeachable offense if Trump vetoes a bill to reopen the government 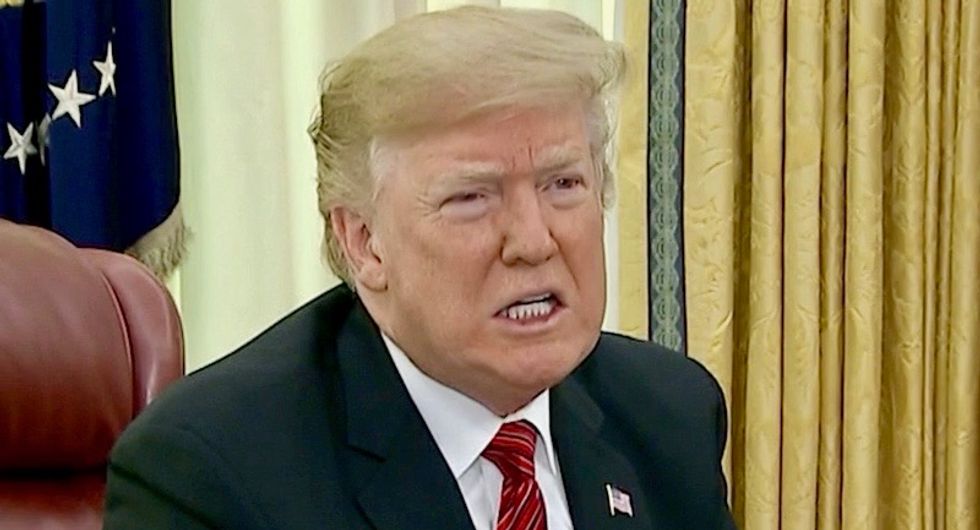 One of Washington’s favorite parlor games of late has been debating what constitutes an “impeachable” offense, and whether President Trump has committed one. An obvious candidate has gone unnoticed: the government shutdown itself.

Unlike previous presidents during shutdowns, Trump is not vetoing bills he objects to — an action clearly within his purview. He is promising to veto bills he does not object to because Congress has not given him an appropriation he seeks — $5.7 billion for a wall on the U.S.-Mexico border. He wants to shut down parts of the government — for “months or years” — until he gets his wall money.

Under the Constitution, he has no right to demand such an appropriation — much less to hold vital government functions hostage to obtain it. The president is not coequal with Congress when it comes to appropriations — the power of the purse belongs to the legislative branch, not the executive.

James Madison makes this clear in Federalist 58: “the legislative department alone has access to the pockets of the people.”  Trump’s claim that he can build the wall anyway is even more flagrantly unconstitutional. Article I of the Constitution is clear that “No Money shall be drawn from the Treasury, but in Consequence of Appropriations made by Law.”

Trump’s demand for an appropriation from Congress because of a security crisis on the border was anticipated by the drafters of the Constitution; they specifically refused to combine the power of the purse with the role of commander in chief. (This after all, was the specific grievance against the king of England that sparked the American Revolution itself.)

Worse, in shutting down the government to extort an appropriation he is not entitled to, Trump is violating his oath of office and breaching one of his core fiduciary duties: to “take care that the laws be faithfully executed.” (Emphasis added.) Obviously, a shutdown of one-third of the government for “months or even years” will make the execution of many laws utterly impossible – particularly since the Department of Justice is one of the shuttered agencies. Trump cannot assert that he must shut down the DOJ. The Democrats have passed an appropriation for that department, to which he concedes he has no objection. He is merely trying to use the shutdown as blackmail to force Congress to fund the wall (or at least however much of it can be built for $5 billion).

Taking as our source the very Federalist Society from which Trump gets his judicial appointee punch list, breach of fiduciary duty is the key standard for the “misdemeanors” the Constitution cites, along with criminal acts, as grounds for impeachment.

Nor does the alleged national security crisis on the border offer a justification – even an extraconstitutional one – for Trump’s hostage-taking.  In fact, it makes his fiduciary breach even broader, given his willingness to shut down the Department of Homeland Security. The administration says the border, in its present state, is an unacceptable risk, because immigration officials have apprehended 3,000 “special interest” immigrants at that border. (Note – apprehended. The system apparently works.)

None of these people, let’s note, were terrorists. In fact no terrorist is ever known to have sought to cross the Mexican border.  On the other hand the Department of Homeland Security did apprehend 3,700 terrorist suspects  at airports and other legal points of entry not on the Mexican  border. Refusing to fund the Department of Homeland Security for months or years, as the president has threatened to do, in order to stop a nonexistent threat on the border would thus greatly increase the risk of terrorists crossing into the U.S. in the way they have historically done so – that is, through other ports of entry.

So we are faced with a president who is seeking to overturn the congressional power of the purse. To achieve this unconstitutional end, he says he is ready to shut down the Justice Department — perhaps even for years. He is also willing to shut down the very agency that, since 9/11, has successfully protected the United States from terrorists entering the country – the Department of Homeland Security. This is abuse of power and fiduciary breach at its most definitive — with one important caveat.

Were the House to move articles of impeachment against Trump based on a prolonged shutdown, the president has, as of today, one powerful defense. He has not actually vetoed any bill to reopen the government, because the Senate has failed to place one before him. Since government can be funded only by legislation passed by both Houses and then signed by the president (or passed over his veto) Trump actually lacks the power to reopen the government – as long as Senate Majority Leader Mitch McConnell persists in not allowing the Senate to vote on any bill Trump says he won’t sign.

This collusion by the Senate majority with Trump is fundamental, since the heart of Trump’s fiduciary breach lies in his usurpation of the congressional power of the purse.  McConnell, the leader of one chamber of Congress, is thus far fully complicit in this effort.

So solving the shutdown – without having to impeach the president – is quite simple. Enough senators – of both parties – must compel McConnell to bring bills to reopen the government before the Senate for a vote. Then, if President Trump holds the government hostage by vetoing those bills after they pass, those who wish to impeach him will have their ironclad impeachable offense. Meanwhile Congress can override the veto and restore law enforcement and other vital federal funding.

If McConnell calls Trump’s bluff, he could not only end the shutdown but also make a prolonged impeachment crisis much less likely.

A former healthcare worker and caretaker from Pittsburgh has been sentenced to 17 years in prison for a hate crime, the Pittsburgh Post Gazette reports.

Zachary Dinell admitted to abusing special needs patients, even recording it and bragging about it to other caretakers. Dinell abused at least 13 residents of McGuire Memorial, a residential medical facility. He and another caseworker, Tyler Smith, recorded themselves abusing residents by punching, kicking and choking them.