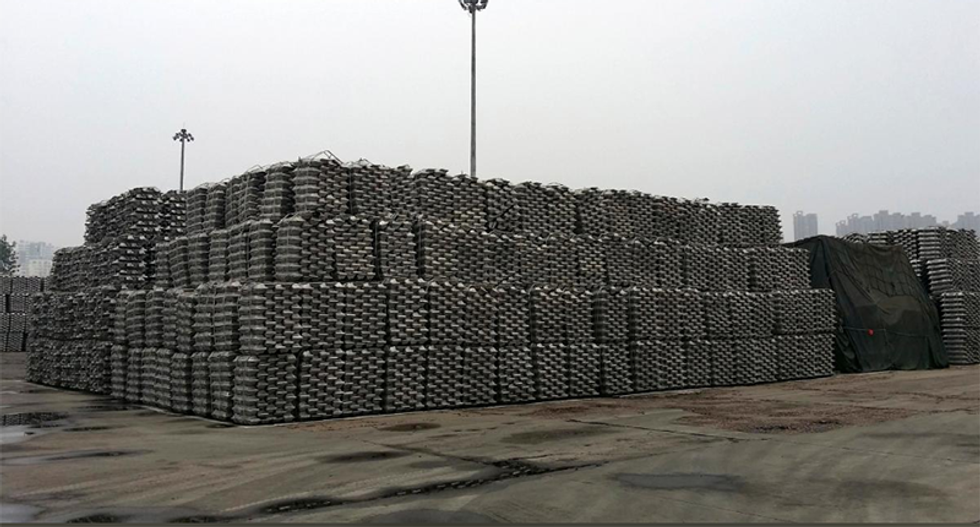 Aluminum ingots are piled up at a bonded storage area at the Dagang Terminal of Qingdao Port, in Qingdao, Shandong province June 7, 2014. REUTERS/Fayen Wong/

The world’s top producer churned out more than 3 million tonnes in a month for the first time, undeterred by aluminum prices at two-year lows, the impact of the U.S.-China trade war and Beijing’s environmental crackdown.

Output hit 3.05 million tonnes in December, National Bureau of Statistics data showed, up 8.2 percent from November and up 11.3 percent from December 2017.

On a daily basis, China produced almost 98,400 tonnes of aluminum last month, up from 94,000 tonnes in November and also a record high, according to Reuters calculations. December had one more day than November.

Winter restrictions on output to curb pollution were also less severe than expected.

Shanghai aluminum prices SAFcv1 slumped a hefty 14 percent over 2018 to below 14,000 yuan ($2,063) a tonne amid plentiful supply and worries over the impact of the Sino-U.S. trade war on demand.

“Even though at the current (aluminum) price you may say smelters are not making money, as long as they break even they will continue to produce,” said Lau, who expects another 5 percent increase in China’s output in 2019.

“Those newly commissioned smelters have to start operating to pay back their loans. They have to generate enough cash flow to do that.”

Alumina prices AALc1, which soared from March last year on an outage at Norsk Hydro’s (NHY.OL) Alunorte plant, fell almost 30 percent in the fourth quarter, easing the pressure on smelters.

Meanwhile, output of 10 nonferrous metals - including copper, aluminum, lead, zinc and nickel - came in at a record 5.08 million tonnes in December, up 7.8 percent from November and up 10 percent year-on-year.

Full-year output was up 6 percent at 56.88 million tonnes, also a record high. The other metals in the group are tin, antimony, mercury, magnesium and titanium.