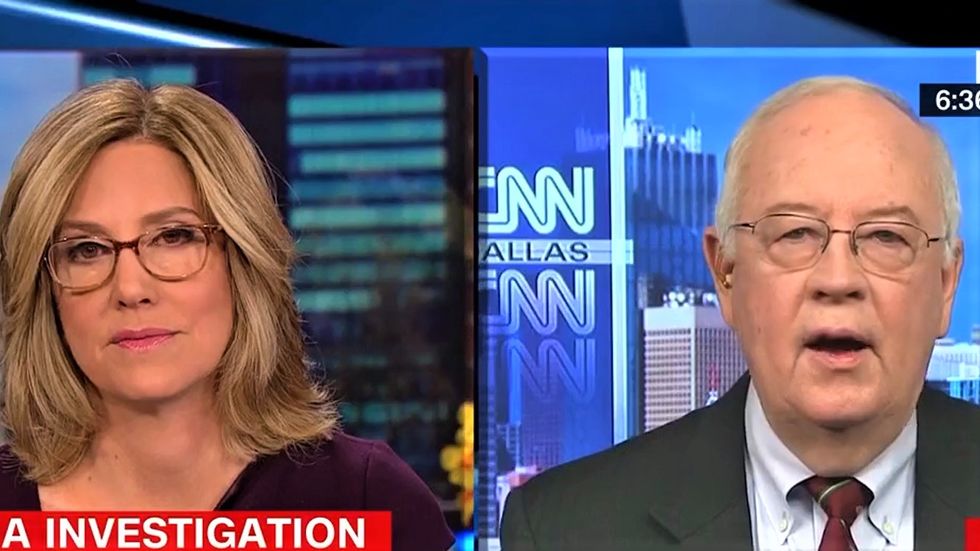 Former Whitewater special prosecutor Ken Starr on Tuesday tried to make excuses for President Donald Trump's shady behavior in his dealings with the Russian government -- but he got quickly shut down by CNN host Alisyn Camerota.

At the start of his interview with Camerota, Starr criticized the FBI for opening an investigation into whether President Donald Trump was working on behalf of the Russian government when he fired former FBI Director James Comey.

"The FBI, I think, honestly, made a terrible misjudgment to say, 'Based upon these public statements by someone given to colorful public statements, namely the president, we're going to launch an investigation into whether he is in cahoots with a foreign power,'" said Starr, who described news of the investigation as "very distressing."

Camerota, however, pointed out that there was more than enough suspicious behavior on the president's part to warrant investigation, such as his actions in keeping the contents of his meeting with Russian President Vladimir Putin a total secret from even his own administration.

"Well hold on, judge," Camerota interjected. "There was an interpreter at a couple of these meetings and the president confiscated that interpreter's notes and swore that interpreter to secrecy. Wouldn't that arouse your suspicion."

Starr allowed that such behavior justified the need to "gather the facts" about what happened, although he still seemed to think that launching the kind of formal investigation initiated by the FBI was a bridge too far.

Camerota demanded to know how else you could find these facts if you didn't either launch an investigation or issue subpoenas to the president and his interpreter.