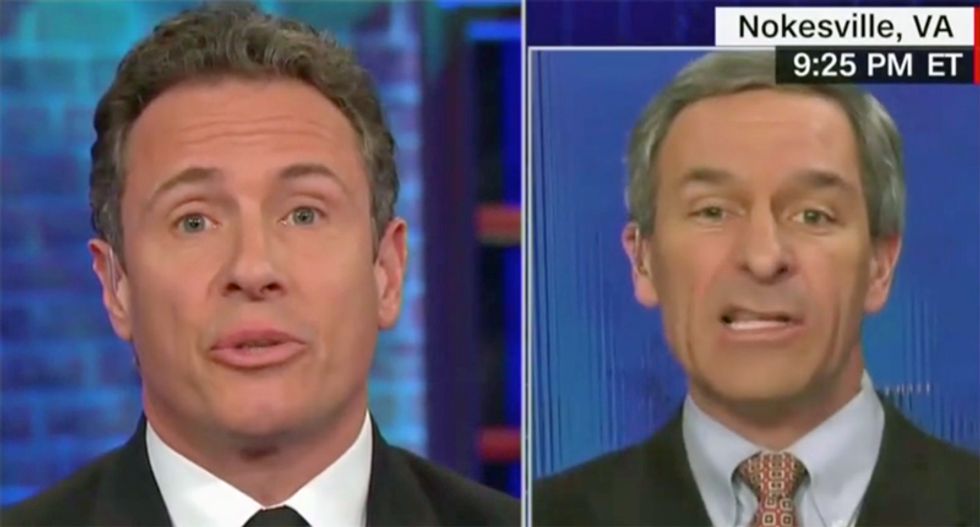 Ken Cuccinelli is the former Attorney General of Virginia. Cuccinelli ran unsuccessfully for governor of the commonwealth and his spent his career after elected office advising Ted Cruz's presidential campaign and working for FreedomWorks.

The discussion focused on reports that special counsel Robert Mueller is investigating the NRA's relationship with Russia during the 2016 presidential campaign. Alleged Russian spy Maria Butina reportedly sought to infiltrate the organization.

The gun group's spending in the 2016 election surged over their spending against Democrat Barack Obama in the previous two cycles.

Much of the surge came from a single donation of $19.2 million by an undisclosed individual.

Coochinelli, however, argued that there was no reason to think there was anything suspicious about the spending surge.

"First of all, it may seem odd in this day and age, but until recently the NRA was fairly bipartisan in its support and they did that quite intentionally and sometimes to the frustration of some of us that are on the right, but in recent years as the Democrats have thrown in the towel, virtually across the board on being protective of Second Amendment rights at any level, the NRA has responded by skewing it's support for the first time in it's history to Republicans," Cuccinelli argued.

"So don't take the spike in 2016 as something anomalous for the NRA, because they have money coming in, it's a change for the NRA because the politics for the United States on the issue they care about, guns and the Second Amendment has become polarized between the two parties," he added.

"I guess it's all those dead kids who skewed the perspective for some in terms of what you need to do in terms of harnessing lobbying efforts," Cuomo said. "Dead kids tend to do that."

"That's just baloney," Cuccinelli argued. "Had people been armed who are good guys to defend those kids, who'd have dead bad guys."

"So just bringing this back to Mueller, I don't think that Mueller's investigation has to do with the politics about gun control in this country," Rangappa said.

"Of course not," Cuomo agreed. "Nobody thinks that."

"And I don't think that Ken can so conclusively come to the conclusion that the spike doesn't mean anything. Mueller is following the money and we do know that Maria Butina, a Russian spy, was involved in going into NRA circles trying to bring those people in. Having a Russian banker that has a lot of funds involved in this, and if somehow, Russia was trying to use a legitimate U.S. organization or legitimate U.S. persons as straw donors for illegal campaign contributions, that would be a problem, regardless of where you stand on gun control," she noted.